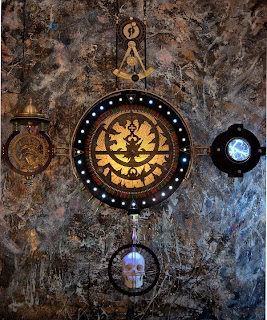 Jake von Slatt posted this incredible image of Art Donovan's "Shiva Mandala" at The Steampunk Workshop. Jake quotes Art as saying the following about the piece:
My most most complex Steampunk work to date with influences of Hinduism, Freemasonry and ancient astronomy. 72" tall x 72" wide. Solid Mahogany, Solid Brass, Glass, Spun-Filament Fiberglass, Plaster, LED + Incandescent Bulbs, Acrylic Resin, Ultra Violet Tubes + Electric Motors.
My own interest in the piece stems from my presentation about Captain Nemo at last fall's Steam Powered Steampunk Convention in Sunnyvale, CA, where I underscored the importance of a more global approach to Steampunk art, particularly Indian, given the Victorian Orientalist fascination, and because India represents the steampunk value of resistance to Empire. Given that the centerpiece of the mandala is a "precise, hand made reproduction of an ancient Persian astrolabe," this image is a bit of serendipity come my way; I'll be presenting my paper on Nemo as original Steampunk, and this piece could serve as a visual interface to the various incarnations Nemo undergoes throughout Verne's works. The statue of Shiva could be his life as Prince Dakkar, which he effectively dies to (the skull in the cage as symbol of Death) and is reborn as Captain Nemo (as symbolized by the sextant-inspried craniometer, which also has Masonic connotations). His descent into the Maelstrom (the blue energy source) renders a second death and rebirth, after which he moves to the center of the mandala, as the benevolent mystery of Lincoln Island, where he finally finds redemption and inner peace (although I argue that Allan Moore's further false death followed by subsequent resurrection is a far more satisfying reading of the end of Nemo and the Nautilus in "The Mysterious Island.")

Of course, this is just an initial read. If Mr. Donovan is amenable, I'd like to use the images in my presentaion, at which time I'll do a more thorough analysis. The point of my paper is that Nemo is a character who is constantly reinventing himself in the pursuit of building identity, which is linked to how Steampunk performativity allows cosplayers to explore alternate identities in the pursuit of their own. As I put it in my paper,

Verne’s original character as embodiment of the essence of the Steampunk hero by virtue of the repetitive cycle of death and rebirth he undergoes throughout this alternate history: a subaltern victim of oppression and freedom fighter against imperial tyranny; the self-made inventor of the spectacular Nautilus, an artistic romantic fleeing a dystopic present into a retrotopia beneath the ocean; and an ecumenical and egalitarian humanist.I'll be delivering the paper at the Eaton Science Fiction Conference in Riverside, CA in April.

For more information on the Shiva Mandala, go here to Art Donovan's blog, or to Scribd to see a document detailing how it was built.

Finally, a video which allows us all to visit the artwork in a virtual art gallery, courtesy of Vimeo.

Shiva Mandala ( from the Steampunk Collection. Art Donovan 2009 from art donovan on Vimeo.