There were at least two entries into CGSociety's yearly challenge which adapted the biblical myth of David and Goliath to a Steampunk aesthetic (someone implied there were more at the forum, but I haven't found them yet). In seeking to understand the Steampunk aesthetic, a comparison with the original work is needed. Representative of the ancient middle eastern version of the tale is Simon Bisley's rendering, from his Illustrations From the Bible: A Work in Progress. There are a few key elements in Bisley's image which are consistent with the biblical account in 1 Samuel. First, Goliath is a giant, and David is diminuitive: whatever the recent Dead Sea Scroll discoveries have determined about short vs. long cubits, or what biblical historians debate was the age and size of David (who was apparently big enough that King Saul, a very big man himself, offers him his armor), the David and Goliath myth is a about a little boy against a giant. It is the story of an underdog facing ridiculously bad odds and winning. Second, David is illuminated from above, which shows that he is more than just a crack shot with a sling; he is divinely empowered to defeat Goliath. It also needs to be noted that Goliath and the Philistines represent technological superiority, given their literal edge in making weapons with iron. The Iraelites, according to the bibilical account, were still working with Bronze. David drags the whole ancient weapons race in the Valley of Elah all the way back to the stone age, eschewing modern conventional protection and weaponary to do battle with Goliath. This is the basic version found in countless children's retellings of the story. As biblical stories go, it's likely the most recognizable after Adam and Eve, Noah's Ark, or the crucifixion. 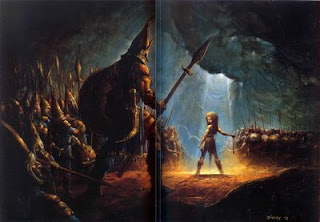 That said, let's look at the two Steampunk images.

The first is by Cory Jespersen, who gives this description of it at the CGSociety Forum:

Goliath was a three story tall mechanical scorpion. In Greek mythology the scorpion was a monster summoned at the will of a wrathful goddess to create destruction. No soldier or arm would try to stop the goliath beast. 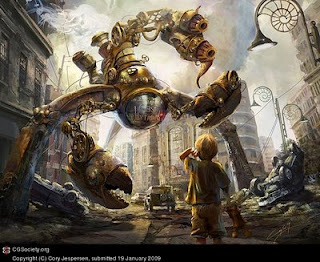 While this image clearly depicts a small child ready to fight a much larger opponent with nothing more than a stone, it is difficult to see how a giant brass lobster robot is a good steampunk rendering of Goliath. There are no bystanders, and there is no evidence of divine intervention on little David's behalf, unless we accept his teddybear as a child's totem against evil. While Jespersen says little David is a shepherd, it looks more likely that the Goliath Scorpion made enough noise while tossing cars around to wake David from his nap. I also see no sign of resistance, given that the ruined vehicles are not military vehicles.

From a Steampunk perspective, this image gets very low points with me, given the presence of the ruined cars, which are ostensibly powered by combustion, not steam. While the Goliath Scorpion has gears and valves, the setting appears to be too modern for what passes for literary and cinematic Steampunk, especially given little David's clothing, which is obviously mid-to-late twentieth century. This may be splitting hairs, as one could imagine a steam-powered twentieth century--if Stephenson and Judson can imagine a steam-powered future, then it follows that a steam-powered present is equally possible--but this image seems to be more generic sci-fi, in the aesthetic of giant insect B movies, rather than the aesthetic of a Dickensian London. Whatever we might say about the Steampunk aesthetic, it seems inarguably conflated with the fashion and architecture of the Victorian or Edwardian period.

The second image is by Roger Nobs, and is superior to Jesperson's image in a number of ways. Nobs gives this description for the image at the CG Society forum:

The famous British Industrialist and inventor, Sir Gerald Oswald Liath, of Liath Industries, has for the past 10 years been a recluse, seen only by those of his immediate household at his large country estate and workshop he build in the heart of the Oxfordshire countryside.

Sir Gerald has had dark dreams of the filth and sqallor of the slums his factories have helped to create in the sprawling slums of London. His mind becomes fixed on bring the whole festering mess down and re-building the city as the gleaming Eden it should have been. Sinking into madness, he finally creates his greatest work, the giant Goliath, the first of an army of machines that will bring about the visions of his crazed mind.

But the poor and downcast of London showed the genius of their spirit and hope in the young boy, David, who felled the giant on the dawn of the fatful day, with a small cobble from the mud of those same streets Sir Gerald loathed so much. 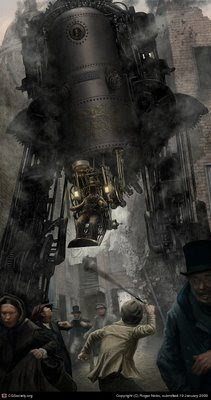 The giant aspect of Goliath is played up here, even though the actual opponent is an old man--which Roger Nobs identifies as Gerald Oswald Liath: 'G. O. Liath', a.k.a. The Controller, "the great industrialist who has lately become a recluse, devoting himself and his vast resources to his secret experiments in steam engineering." Old man Liath is operating a steam-powered giant robot, which bears a dark iron name plate designating it also "GOLIATH" (in case the sight of a huge automaton being faced down by a small boy with a sling wasn't indicator enough). This actually evokes two resonances between the biblical myth and steampunk literature: technological superiority and oppression. The plight of the Israelites in the biblical story seems to be that of an oppressed people. The Philistines are the oppressor, come to conquer. The Controller could be read as a sort of mad-scientist meets Mr. Bumble from Dickens' Oliver Twist. He has the look of a factory owner or magistrate of a poorhouse, which is unsurprising, given that Nobs based his concept art for the character on some of the old men from a TV adaptation of Bleak House. Whatever his identity, he's well fitted as a Dickensian villain in a Vernian vehicle. As Anatomista commented in the thread about Nobs' image, "I think David will not beat this one, Goliath is not only a monster in size, but also representing ... Industrialism". Nobs' attention to detail and implied narrative is noteworthy, as he made a number of concept drawings, including one of Sir Gerald showing off the steam-robot before it wreaks havoc on London. 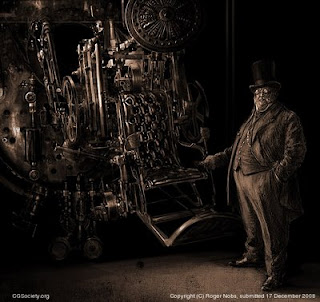 Perhaps I only say this because Nobs' David seems to be playing on Oliver Twist as portrayed in the cinematic adaptations--Nobs has stated at the CGSociety forum that "David, our hero, is a sort of Oliver Twist". The clothing of all the characters is appropriately Victorian, but Nobs has presented a thoroughly steampunk David. While the fashion culture of Steampunk might beg for blue hair, I read the word "punk" in Steampunk as referring to the literature's consistent aversion to Colonial Empire. As a result, Steampunk heroes are like Dickens' heroes: lower or potentially even criminal class. This David could be one of the beggar children under Copenhagen Jack in Tim Powers' Anubis Gates, a very young member of the resistance in S.M. Peters' Whitechapel Gods, one of the child-heroes of Stephen Hunt's Court of the Air, or one of the young street gang in The City of Lost Children. These multiple references to works commonly categorized as Steampunk demonstrates Roger Nobs' adherence to common aesthetic elements accepted as "steampunk". It is an interesting sidenote that Steampunk's anachronistic future technology further juxtaposes David's desperation and need for divine intervention, given that Nobs has chosen to retain David's stone age weapon of choice. This desperate move on David's part also speaks to the idea in Steampunk of the boy's adventure story, which Nobs' captures in David's defiant stance.

Both of these images were listed in the "Honorary Mentions" of the competition, and while I love Fabricio Moraes' Steamnocchio, I really think Nobs' David and Goliath captures a good deal more of the Steampunk aesthetic than Moraes does. I don't know if it should have won over Moraes' image, which is incredible, but I think it deserved more than an honorary mention, which is why I'm honoring it as the first close read of the Steampunk Myths and Legends images here at Steampunk Scholar. Check out the progression of Nobs' work at the CGSociety Forum here.
Email Post
Labels: Defining Steampunk Graphic Art Myths and Legends