I don't know if it's just California, or if it's some sort of cosmic steampunk disruption of time and space, but I have rotten luck with airport shuttles when I'm in California on steampunk business. Last October at Steam Powered, my driver couldn't find the Domain Hotel with a GPS. My experience getting to my hotel for the Eaton conference was a comedy of errors, which ended me up at the wrong Marriot just before midnight. Having completed my semester of full time teaching and full time coursework only 36 hours earlier, I had some last-minute adjustments to make to the paper I was scheduled to present at the Eaton conference, which kept me up well into the wee hours. Accordingly, I arrived late at the conference, and missed the Welcoming Remarks and much of the opening panel session, titled "The Emergence of Modern SF."
Thankfully, I was in time to catch the last bit of Roger Lockhurst's presentation on how the museum features largely in French science fiction. He mentioned the mummy's curse and called fiction utilizing this legend as "Egyptian gothic," which although it doesn't contain mummies proper, reminded me immediately of Tim Powers' Anubis Gates, which I read the week prior to the conference (review and reflections to follow the Eaton report). Paul Alkon followed with a reflection on the quality and aesthetics of what supercilious academics denounce as "junk fiction", asking us to reflect upon our reading as well as the conference with the question, "As a story, how did you like it?" This question impressed me, since so often the academic literary discourse denigrates into reductive approaches, forgetting perhaps that stories were the reason we got into this work in the first place.

Paul Alkon presenting at the first panel
With this framing the discussion, the panelists sat down to answer questions and debate among themselves, largely contending the term "proto-SF" vs. "early" or "pre-pulp" science fiction. Arthur Evans argued that the trouble with the term proto is that it suggests the idea of coming "before the true thing." Given that Arthur Evans is one of the foremost Verne scholars in North America, it's unsurprising he would want to hear of Verne as not being the "true thing" in regards to science, or scientific fiction. He suggested the possibility of terms such as "early science fiction" as other options. The discussion then moved about the panel as to the dating of the beginning of science fiction, with some stating Verne, and others going as far back as Mary Shelley. Paul Alkon replied to this with a comment with broad application, and relevance to the ongoing discussion here at this blog concerning the issues of nomenclature and the clarifying of terms. He reminded the group that SF, like any critical term, is rather arbitrary, and ended those thoughts with a statement on the retrospectively self-reflexive nature of SF: "Frankenstein only became SF when we dropped the bomb on Hiroshima."

Members of the first panel, with the esteemed Arthur B. Evans looking contemplative
The second panel was titled "The Two Jules Vernes," the first Verne being the literary, academic perception of Verne as author, playwright, and visionary thinker. This is the Verne who is the most read nineteenth century author, the most translated writer in the world, with translations in 81 languages by the count of Jean-Michel Margot's, president of the North American Jules Verne Society. The second Verne is the pop culture icon, whose name is invoked in commerical advertisements about new technology, or attached to news articles about travel, innovation, or submarine technology. During this panel, Terry Harpold, an associate professor of the University of Florida, announced that the Jules Verne Museum in Nantes, France, has released digital images of Verne's original manuscripts. This is a huge boon to Verne scholarship, since it means that Verne scholars no longer have to travel to Nantes to study the original manuscripts. He also mentioned that the manuscripts will be submitted to multi-spectrum analysis, which will reveal even more about the process of Verne's writing.

On a personal note, I was inspired by Terry's presentation about how he teaches Verne to students. This, in tandem with Terry's reading of Walter Miller's presentation, has made me disposed towards trying to get Walter Miller's annotated 20,000 Leagues Under the Sea approved for my introductory English courses. 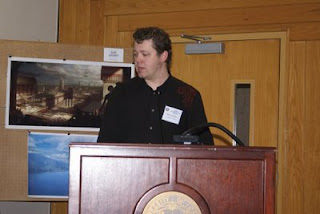 Presenting my paper - thanks to Dennis Kytasaari for the photo

I presented my paper in one of the first paper sessions on Friday--throughout the weekend, paper sessions were held simultaneously in two rooms. My paper session was titled "Steampunk Verne." I followed up Robert O'Connor of North Dakota State University, whose "Captain Nemo's Nautilus as Instrumented Will" aptly addressed the monstrous nature of Captain Nemo in Leagues. This dovetailed into my presentation nicely, and allowed me to excise most of my treatment of the Leagues identity of Nemo, who is a likely candidate for the prototypical mad scientist and technological genius of steampunk. I'll be posting my presentation paper here as the fourth installment of my report on Eaton 2009, so I won't say much about that now, save that I was incredibly nervous. Presenting Verne/steampunk research to people whose specializations and expertise are Verne/steampunk is intimidating on a sublime level. My stomach was so tense, I felt like I'd been on an ab-master for 20 minutes when I sat down. I was followed by SF writer and instructor at California State University, Fresno, Howard Hendrix. Howard's presentation was excellent, and provided a counter argument to my suggestion that Nemo is the true proto-steampunk, Howard arguing that it is Phileas Fogg of Around the World in 80 Days. Hendrix's argument was strong, and very convincing, based on the idea of Fogg as a clockwork Victorian, with clockwork as a recurring thematic element in steampunk. I found myself revising my own paper in my head as I listened to Howard, thinking towards how Verne's heroes present a number of originals for steampunk types to be based on.

The second paper session I attended was also on steampunk: "Steampunk After Verne." Stanley Orr's "Cyberpunk, Steampunk, and the Extraordinary Voyages of James S. Lee" offered Lee's memoir, Underworld of the East as a "missing link" between steampunk and cyberpunk. While I found Orr's argument convincing as to the link between Lee and cyberpunk, I found myself somewhat unconvinced overall. Orr did mention several scholarly articles which accused cyberpunk of doing nothing more than reviving nineteenth century adventure stories in a virtual landscape rather than a geographic one. I'll have to revisit those articles, several of which I came across when researching cyberpunk a few years ago, to see if Orr's thesis actually holds water. Establishing an aesthetic link between cyberpunk and steampunk would be interesting, although I currently tend to agree with Chris Garcia's estimation that there isn't one.

Next came Andrew M. Butler of Canterbury Christ Chuch University, who spoke mainly about Michael Moorcock and Christopher Priest and their contributions to steampunk. I've only begun my reading of Moorcock's Nomad of the Time Streams and I have yet to read anything by Priest (although I did see The Prestige), so I can't comment on his content, save to say that I agree once again with Chris Garcia (and this not simply because I was sitting behind him several times during the weekend) in that Butler did seem to focus on two trees to the exclusion of the forest, failing to situate Moorcock and Priest in the greater steampunk context. It should be noted though, that Butler did not present his entire paper given time constraints, so there is the possibility that such contextualization was lost there.

Rob Latham of Eaton host campus, University of California, Riverside, was what I'd been waiting for and anticipating. His paper, "Our Jaded Tomorrows: Steampunk Retrofuturism in Thomas Pynchon's Against the Day" is likely the first piece of scholarship on Pychon's epic. Latham confirmed what I have only conjectured (having read only the tip of this literary iceberg last spring, having to abandon it when I began my PhD coursework), namely that Against the Day is indeed, a steampunk text. After a length introduction glossing the history of retrofuturism which included such evocative terms as "Dutch atompunk" and "Raygun gothic" (the latter exemplified by Greg Broadmoor's raygun series), Latham called Against the Day a "Tom Swift adventure crossed with a Heisenberg thought experiment."

Discussing Pynchon's Against the Day with Rob Latham
Latham's contextualizing of Against the Day within the tradition of retrofuturism was very satisfying to me. In reflecting on it since, I think Latham's article (which will be printed in the Science Fiction Studies Review in July of 2009) presents steampunk as part of the retrofuturist nostalgia found in films such as Sky Captain and the World of Tomorrow and Serenity, which is why both are mentioned in discussions asking for definitions of steampunk. While neither are steampunk proper, the retrofuturist label applies to both works and subgenre. We might say that steampunk, deiselpunk, etc., all belong to this category of retrofuturism, whereby "the past is the present of a future yet to come." It is perhaps the aesthetic of retrofuturism which I am engaged in the investigation of, although perhaps nineteenth century retrofuturism as opposed to other kinds.