Thomas Pynchon: Against the Day, Part 1: The Light Over the Ranges 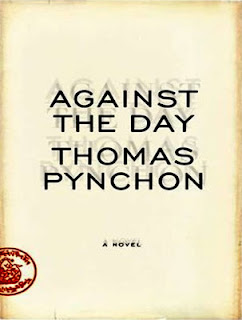 I took a stab at reading Thomas Pynchon's epic Against the Day in the spring of 2008, while on vacation visiting my sister's family in Katy, TX. I had just successfully defended my Master's thesis, and was trying to decide whether or not to write on steampunk for my PhD dissertation. I knew nothing about Pynchon except that he was the sort of writer high-brow literary scholars take seriously. Having the potential to use Pynchon in my dissertation would lend it credibility outside pop-culture or SF studies.

My brain was likely too fried from writing furiously to complete the thesis. I gave it my best shot, but I couldn't keep all the characters straight, and ended up buying Dan Simmons' The Terror and reading it instead. I left Pynchon aside, and hadn't had time to pick Against the Day up until this past week. My interest was renewed by Rob Latham's paper presentation at the Eaton conference, titled "Chums of Chance and Warlord of the Air: A Steampunk geneaology for Thomas Pynchon's Against the Day." If nothing else, it confirmed that Pynchon was writing in a steampunk style, and someone other than a contributor to wikipedia had thought so.

Being a massive epic, of 1085 pages, I've decided to break my blogging about it into the five sections the book is broken into: The Light Over the Ranges, Iceland Spar, Bilocations, Against the Day, and Rue du Depart.

Even so, I won't be giving the sections a close reading at this point, but more of a combination of reaction and overview. If you're interested in going deeper with Against the Day, I recommend the wiki devoted to the book, especially the annotations. A book with this dense a narrative needs its own annotated wiki!

None of my comments at this point can be conclusive, as I'm still working my way through the narrative. My worry is that I'll get to the end, and not remember what I was thinking. So think of these blog postings as class discussions on the novel to date.

The first part, "The Light Over the Ranges," begins in 1893 at the Chicago World's Fair. The "Chums of Chance," crew of the hydrogen skyship Inconvenience, are the first characters the reader is introduced to. While it would be remiss to call any of the characters protagonists, the Chums are definitely focal, since they bookend "Light Over the Ranges." They make appropriate characters to focus on, given one of the main themes of part one, which is the loss of innocence. The Chums are made up of five members: Randolph St. Cosmo, the "ship commander"; Darby Suckling, "the baby of the crew" who serves as both "factotum and mascotte"; Lindsay Noseworth--severe, impatient and humorless second-in-command; Miles Blundell, the kindhearted, overweight, and somewhat clairyvoyant Handyman Apprentice; and newest member Chick Counterfly, who the Chums rescued from the Ku Klux Klan. In addition to these five young men, the Inconvenience is home to Pugnax, a genius canine with "uncommonly articulate eyebrows" who, when the reader first meets him, has his nose "among the pages of a volume by Mr. Henry James" (3-5). The Chums are the embodiment of the term "boy's adventure story," being only boys themselves. Their adolescent fervor gives the first pages of the book a lighthearted and optimistic tone--one can almost hear the Sousa March while reading the first page.

The Chums fly to the World's Columbian Exposition in Chicago, where their interactions fan out in an increasingly exploded narrative, jumping from the Chum's meeting with Merle Rideout, a photographer and his daughter Dahlia, to Merle and Dahlia's adventures following the departure of Dahlia's mother (who has left Rideout to become a traveling magician's assistant), to a backroom deal between the magnificently wealthy and clearly villainous Scarsdale Vibe and the Chum's mentor, Professor Heino Vanderjuice, an investigator named Lew Basnight and so on. Merle and Dahlia's tale of odd jobs and photographic alchemy jumps off to become the story of Webb Traverse, a working man with a penchant for explosives, whose son becomes the beneficiary of a scholarship from Scarsdale Vibe. The Traverse family figure largely into one of the narratives in part two, and so throughout this first section, I assume Pynchon is laying the beginnings of a brilliant web of associations. I have yet to ascertain whether or not that is the case, as there are numerous other characters Pynchon introduces his reader to in this first part who don't figure into the beginning of the second part of the book at all.
Beyond the dizzying way in which the narrative makes these leaps from character to character background to new character and then back to some seemingly incidental character from twenty pages prior, Pynchon rams the reader directly into realms of the fantastic without warning or apology. When the Chums receive orders from the "Upper Hierarchy" to "get up buoyancy immediately and proceed by way of the Telluric Interior to the north polar regions" (114), the average reader, unfamiliar with the term Telluric, might assume the Chums have been told to go over a landmass referred to as the "interior" of some country. By the next page, as the Inconvenience is passing over an Antarctic landscape which has given way in the past to "tundra, then grassland, trees, plantation, even at last a settlement or two, just at the Rim" (115). This is the Rim of the ostensibly shrinking gateway to the interior of the hollow earth.

The shrinking Rim of the hollow earth's entrance is but one of the vanishing mythic landscapes of "The Light on the Ranges." In an earlier discussion, Professor Vanderjuice says that "the Western frontier as we all thought we knew it from song and story [is] no longer on the map, but gone, absorbed--a dead duck" (52). Pynchon illustrates the point with an analogy delivered by the professor, wherein the way in which cattle are summarily dispatched in the Union Stockyard are compared with the way in which the cowboys who once roamed the frontier are being edged out by the industrialization of frontier life. Even the Chums of Chance find their own world of adventure becoming tenuous, when "Cheerfulness, once taken as a condition of life on the Inconvenience, was in fact being progressively revealed to the boys as a precarious commodity these days" (54).
This theme of the loss of frontier, of the spaces of adventure (which continues in the second part) resonates with ideas in steampunk art and literature - the nostalgia for spaces, both exterior and interior, which enabled a greater buoyancy of spirit and amibition - pre-sinking of the Titanic mindset which often found expression in the Gernsback SF pulp fiction of the 30s and 40s, but lacked a commensurate reality in the wake of two World Wars and the Atomic era. Pynchon's writing style is decidely evocative of this buoyancy of spirit, especially when read aloud by Dick Hill on the audiobook of Against the Day. Besides being a masterful voice actor, Hill keeps his tongue just far enough in-cheek throughout the reading to convey the massive sense of ironic tone Pynchon keeps lurking just beneath the apparently optimistic surface of Against the Day, without losing the sense of light-hearted fun the book is often, without irony, unabashedly engaging in. Given Pynchon's pedigree, it's likely he's engaging the reader in a puzzle-box of word-play and narrative shifts, both temporal and topical; at the same time, he's clearly written an homage to the adventure tales of the late nineteenth and early twentieth century, for this pastiche of mystery, Western, adventure tale (and as the second part begins), Lovecraftian horror, replete with detectives, Western outlaws, anarchists, inventors, gangsters, supernatural phenomenon and a teenage airship crew, never quite feels like its just about its irony. Pynchon isn't playing at satire here, at least not in the first part. If anything, it would seem he is endeavoring to do the very thing Michael Chabon is fond of championing: elevating the "lower" forms of literature, the genre fictions, into a more refined and rigourous context.
NOTE: Graat Anglophone Studies' March 2008 issue was devoted to "Reading Thomas Pynchon's latest novel Against the Day" - Check that issue out HERE.
Email Post
Labels: Against the Day Novels Thomas Pynchon