Against the Day by Thomas Pynchon - Part 3: Bilocation 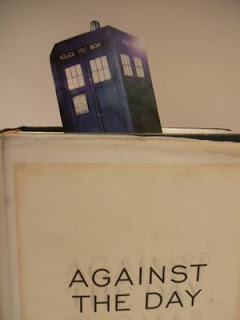 By the time a reader reaches the third part of Pynchon's epic, they're feeling much the same way a marathon runner does when they catch their first wind, that rush where you muse, "this is no big deal, I don't see why people think this is so difficult." Two hours later, your breath coming in ragged gasps and your legs on fire, you wonder what the hell you were thinking getting into this. At the end of Part Three of Against the Day, I was feeling a readerly equivalent.

This isn't to say "Bilocations" is bad reading. It's more of the same disconnected, decade-sweeping action which Parts 1 & 2 delivered. But it is just that. More of the same. The narrative does seem to amble aimlessly, though I know that's not the case. Pynchon stacks the deck with detail after detail, some meaningless, but most not. I was pleased to find a reference to the obscurity of my hometown on page 432, when Lindsay Noseworth of the Chums of Chance goes in for a physical examination at a Chums of Chance Examining Station in Medicine Hat.

I digress. The title of part three, "Bilocations" refers back to a concept introduced in part 2, namely the ability to be in two places at once. This concept is explored in The Anubis Gates as well, and I have yet to ascertain whether it was a fashionable but fantastic fin de siècle theory, like the Hollow Earth. There are numerous references to doubling, which Rudy Rucker plays with throughout The Hollow Earth as a pastiche of Poe and other writers of the fantastic such as E.T.A. Hoffman. I wish I had more time to make a close inventory of all the intertextual nods to genre writing in Against the Day, but they're too numerous for me to cover in these postings. Hopefully I'll have time to tackle an article on it in the next year. It continues to be a surprise each time Pynchon brings an element of speculative, fantastic, horror, gothic, western pulp or spy narrative into this dense text. I keep thinking that Against the Day is where genre fiction goes to die, or something like that.

Like Part Two, which began with the Lovecraftian Vormance Expedition, Part Three begins with a fantastic adventure when the Chums board the HMSF Saksaul, a sub-desertine vessel (it moves through sand like a submarine would move through water) in search of Shambhala. The Chums were commissioned to find a map to the fabled city in part two, and as the third part moves on, the search for Shambhala becomes a major theme. The magical technology element of the steampunk pastiche elements I suggested is found throughout Against the Day, nestled in-between either quotidian events or realistic historical moments, but it reaches one of its most ludicrous moments in the sub-desertine vehicle, which redeploys "energy on the order of what it would take to change the displaced sand into something transparent," by translating the vessel in Time, so as not to be in the middle of the heat energy needed to accomplish the feat (426).

Time travel, a favorite trope of steampunk-related fiction, figures into Part Three as it began to in Part Two. However, in "Bilocations," Pynchon approaches Time Travel and the nature of Time through various characters' mathematical studies, with passages packed with conversations about formulas which were as much Greek to me as the poker diagrams in Ian Fleming's novels were when I was a kid. They likely add great value for people with a background in mathematics in the same way Pynchon's obscure literary references do for people like me (like the brief mention of the street upon which the Museum der Mostrositäten stands - Savile Row, a possible reference to Verne's Around the World in 80 Days, since Savile Row was where Phileas Fogg made his home).

Pynchon also cranks the theme of alternate, sideways realities up a notch here. This is still effectively still a discussion of time--alternate time, when Kit Traverse, traveling via passenger liner the SS Stupendica, finds reality itself being bilocated: "It had begun to seem as if she and Kit were on separate vessels, distinct versions of the Stupendica, pulling away slowly on separate courses, each bound to a different destiny" (514). Kit finds himself no longer aboard the Stupendica, but in the engine room of the S.M.S. Emperor Maximilian, "one of several 25,000-ton dreadnoughts contemplated by Austrian naval planning but, so far as official history goes, never built" (515). The description of how the vessel goes from steamship to battleship seems like a moment out some merging of Titanic and Transformers: "Hydraulics engaged, as entire decks began ponderously to slide, fold, and rotate, and passengers found themselves, often lethally, in the way of this booming and shrieking steel metamorphosis" (518). However, the Stupendica has only 'transformed' in one reality. Dalia Rideout, who had begun a romantic dalliance with Kit, sails on in another reality...and their realities later converge. The ship literally seems to have bilocated. As Kit is told:

No mister, no no--he does not understand--there are no staterooms, it is no longer the Stupendica up there. That admirable vessel has sailed on to its destiny. Abovedecks now you will find only His Majesty's dreadnought, Emperor Maximilian. It is true that for a while the two ships did share a common engine room. A 'deeper level' where dualities are resolved. (519)

A closer look at part three with some colored pens looking for references to dualities, mirrors, and instances of the number two are going to be essential for a fuller understanding at some future point. I'll likely have to take another crack at this monster next year, when I've recovered from running this particular marathon.

The theme from part one, that of the disappearing frontier, makes another appearance, once again in relation to the Chums of Chance. Randolph St. Kosmo makes the observation that people would have once "all been stopped in their tracks, rubbernecking up at us in wonder. Nowadays we just grow more and more invisible" (529). Upon the ground, Darby suckling asks "who are these strange civilians creeping around all of a sudden?" to which Chick Counterfly replies, "The Authorities." Darby Suckling concludes that these Authorities are "Surface jurisdiction only. Nothing to do with us" (550). As civilization becomes more defined, there is less room for adventure, and adventurers, or adventuresses.

As I look over my notes for Part Three of Against the Day, I can only say I'm thankful for people who have blogged their way copiously through this book, as I can't do it justice in my current endeavor. I'll end this post with another moment of the fantastic in the text, which says a great deal about how Against the Day might be read, and how it might be brought into conversation with steampunk. Reef Traverse, one of the brothers whose family form one of the only coherent links throughout the book, is working in a mine when he faces a Tatzelwurm, a subterranean reptilian creature of legend. Reef's reaction is to yell "Holy shit," and then shoot it with a Mannlicher eight-shot pistol, "whereupon the critter exploded in a great green foul-smelling cloud of blood and tissue. He fired again just on general principles" (659). The action is brief and to the point. In most genre fiction, it would take up pages. Pynchon spends a few paragraphs on it, because near as I can tell, the Tatzelwurm, or any other fantastic element, isn't the point of Against the Day. I don't know if this was Pynchon's intention, but I can't help but think that Against the Day is to steampunk what M. Night Shyamalan's Unbreakable is to comic books. It situates very real characters in ludicrous, weird, fantastic situations, but gives them reactions and lives that remain quotidian. Reef is supposed to be hunting down his father's killer, but keeps taking his time doing it, by digressing into romances and odd jobs, just like real people do. We don't go on quests to Mount Doom, and we don't go on world-spanning adventures. Yet Pynchon's characters are on quests, on world-spanning adventures. And through it all, they retain a very accessible and familiar humanity.

This is summed up nicely by Lew Basnight's reflections on being a detective: "somewhere else was the bilocational version of himself, the other, Sherlock Holmes type of sleuth, fighting criminal masterminds hardly distinct from the sorts of tycoons who hired "detectives" to rat on Union activities" (689). A desire to escape the quotidian in fantasties of another self, another identity who flies in airships, fights Moriarty, or wears brass goggles.
Email Post
Labels: Against the Day Magic Novels Pastiche Technology Thomas Pynchon