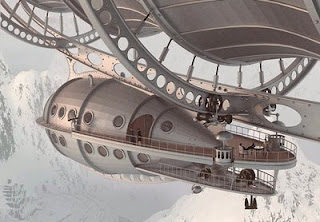 The first chapters of Part Four nearly had me cashing in along with all the other naysayers of Against the Day. I sat wondering if Pynchon had completely lost his way. It's difficult to ascertain on a first read of a book this dense and epic. The scope is to big to take it all in. While I can't say as to whether the author lost his way in part four, I can say with utter certainty that he'd lost me. The opening pages of Part Four present another facet of anarchist life, I suppose, as well as another genre fiction--the spy novel. And interestingly, Cyprian Latewood, the protagonist of these pages, fulfills the sort of James Bond Daniel Craig apparently once mused about in an interview - not a lady's man, but a social chameleon of such depth that gender wouldn't make any difference. Latewood is "a sod" as the text puts it, but he has a powerful desire for Yashmeen Halfcourt. That's all I'm going to say about this aspect of part four, which takes up a considerable amount of the narrative, culminating in a ménage à trois between Cyprian, Yashmeen and Reef Traverse that produces a child.

I'm no prude when it comes to my reading, it's just that by the time the three characters were thus engaged, I had ceased to see anything brilliant about what was being written and felt that it all gotten a bit gratuitous. It was like getting halfway through the first season of HBO's Rome, which seemed to go out of its way for a moment of titillation rather than drama. I get that they're anarchists, so the rules don't apply, so this can be a model anarchist family unit (it's the second ongoing threesome Pynchon uses), but it had all become tired. While one could strain the "punk" in steampunk to encompass the host of anarchists in Against the Day, I just kept wondering where the hell the Chums of Chance had gotten to.

Perhaps that was the point.

Whatever Pynchon is getting at with the Chums' absence, their reappearance in the book came, like a breath of fresh airship. The pages which precede their return chronicle the historical Tunguska event, a powerful explosion in northern Russia in 1908. The Event provides us with an opportunity to sample a bit of the odd humor Pynchon mixes in with serious, dramatic passages without any parenthetical devices.

For a while after the Event, crazed Raskol'niki ran around in the woods, flagellating themselves and occasional onlookers who got too close, raving about Tchernobyl, the destroying star known as Wormwood in the book of Revelation. Reindeer discovered again their ancient powers of flight, which had lapsed over the centuries since humans began invading the North. Some were stimulated by the accompanying radiation into an epidermal luminescence at the red end of the spectrum, particularly around the nasal area. Mosquitos lost their taste for blood, acquiring one instead for vodka, and were observed congregating in large swarms at local taverns...Siberian wolves walked into churches in the middle of services, quoted passages from the Scripture in Old Slavonic, and walked peacealby out again. They were reported to be especially fond of Matthew 7:15, "Beware of false prophets, which come to you in sheep's clothing, but inwardly they are ravening wolves." (784)

I don't know if it's steampunk, but the whimsy of flying reindeer, sideways references to Rudolph the Red-Nosed Reindeer, boozy mosquitos, and Pentecostal wolves strikes my funny bone at the very least.

The crew of airship Inconvenience spotted the Event from a distance, and fly in to survey the devastation, and in it, find Shambhala, laid visible by the blast, perhaps due to a change in light frequencies. Here the reader learns that while people were only ignoring the Chums in part three, the airship and crew have now become invisible:

What it would take the boys longer to understand was that the great burst of light had also torn the veil separating their own space from that of the everyday world, and that for the brief moment they had also met the same fate as Shambhala, their protection lost, and no longer able to count on their invisibility before the earthbound day. (793)

I don't think this concerns invisibility, but a reference back to their conversation with Lew Basnight at the beginning of the book, where the Chicago Fair is said to have "possessed the exact degree of fictitiousness to permit the boys access and agency" (37). On the next page, Lew answers Lindsay Noseworth's question about his juvenile reading habits with "Wild West, African explorers, the usual adventure stuff. But you boys--you're not storybook characters...Are you?" Randolph St. Kosmo replies, "No more than Wyatt Earp or Nellie Bly...Although the longer a fellow's name has been in the magazines, the harder it is to tell fiction from non-fiction" (38). This becomes a recurring them in the Chums' appearances - the fictionality of the world they inhabit, a fiction they are self-reflexive about. They share a fictional, mythic aspect with Shambhala, perhaps only visible to those with the right frame of mind to see them. Considering Yashmeen's father's ruminations about Shambhala, it follows that this is about a perspective rather than a concrete reality: "For me, Shambhala, you see, turned out to be not a goal but an absence. Not the discovery of a place but the act of leaving the futureless place where I was" (975).

The Chums make another appearance in the fourth part, in an adventure as ridiculous as any other Pynchon has already taken the airship crew of Inconvenience. The Chums, in response to Pugnax's canine girlfriend, a "fiercely beautiful...sheep dog" asking if the boys ever "just have adventures anymore?" decide to investigate "an updraft over the deserts of Northern Africa unprecedented in size and intensity" (1018). The adventure references a much earlier conversation between Chick and Randolph, bringing the Chums' adventures at least, full circle. The Chums end up on an alternate version of Earth, simultaneously rising above the one while descending towards the other, but avoiding crashing into mountains "with the usual 'inches to spare,'" (1020) one of Pynchon's many self-reflexive, intertextual nods to the boys' adventure stories the Chums are a pastiche of.

I will have to engage in another close reading, but it appeared to me that the Chums, in arriving on a Counter-Earth to their own, have actually landed on our earth, since they are witness to a world with atrocities which match our 20th century:

"All through the growing region now, the countryside is torn up with trenches."
"Trenches," Miles said, as if it were a foreign technical term...
"Those poor innocents," he exclaimed in a stricken whisper, as if some blindness had abruptly healed itself, allowing him at last to see the horror transpiring on the ground. "Back at the beginning of this...they must have been boyd, so much like us...They knew they were standing before a great chasm none could see to the bottom of. But they launched themselves into it anyway. Cheering and laughing. it was their own grand 'Adventure.' They were juvenile heroes of a World-Narrative--unreflective and free, they went on hurling themselves into those depths by tens of thousands until one day they awoke, those who were still alive, and instead of finding themselves posed nobly against some dramatic moral geography, they were down cringing in a mud trench swarming with rats and smelling of shit and death."

I was pleased when I read this passage, because it confirmed two things for me: that steampunk's fascination with the aesthetic of the romantic period to WWI is linked to the optimism of the period, and that Pynchon is definitely writing in a steampunk mode (whether he intended to or not) when he is writing about the Chums of Chance. Their adventures have taken place in the Victorian and Edwardian period, but effectively end with the coming of "long-range artillery shells," which "till quite recently objects of mystery, glittering with the colors of the late afternoon, could be seen just reaching the tops of their trajectories and pausing in the air for an instant before the deadly plunge back to Earth." In response to the "distant sounds of repeated explosion...the strident massed buzzing of military aircraft" and the glow of the "first searchlights of evening," Randolph St. Kosmo declares, "We signed nothing that included any of this" (1025-26). The Chums move on to relief work, and then romance, as the novel winds down to its finish. And since this post is now Pynchon sized, I'll save any further ruminations for retrospection in my post on Part Five.

Check out Michael Moorcock's fantastic review of Against the Day, which does the best job I've seen of pulling together the novel's variant threads as well as giving evocative descriptions of its contents.
Email Post
Labels: Against the Day Novels Thomas Pynchon