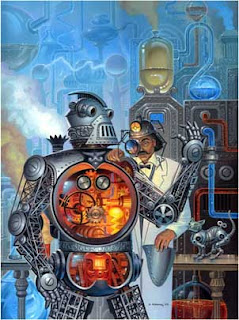 When I interviewed Jeff and Ann Vandermeer at Steam Powered, the northern California steampunk convention last fall, Jeff stated that in order for steampunk to innovate, it would need to write against itself, and cited his short story "Fixing Hanover" as a potential example of what that might look like.

I saved reading "Fixing Hanover" until I'd read and viewed enough steampunk media to get an idea of what Vandermeer might have been writing against. Given the majority of steampunk I've read so far, it seems to me that Vandermeer and other authors who want to "write against" steampunk are writing against a concept of steampunk, not necessarily the genre itself. That said, I've got a long way to go, and may yet see that it was indeed the literature which was being criticized. I should also mention that insofar as "Fixing Hanover" does criticize steampunk, it does so in the best understanding of that term. To think critically about something should not necessarily be construed as being dismissive, reductive, or insulting. It is to contemplate both the weaknesses and the strengths with the ultimate goal of suggesting a better alternative.

"Fixing Hanover" is the story of a brilliant inventor/engineer who has retreated from the world to a peaceful and somewhat backward village, as a reaction to the horror of seeing what use his inventions were put to, namely, warfare. This is not a new concept in science fiction, but Vandermeer's use of a steampunk automaton to guide us through this lesson oft-told but seemingly never-learned is clever. It washes up on a beach, so the reader has that mystery to uncover, but considering that steampunk has roots in the boy's adventure tale, it is also reminiscent of more optimistic narratives like the film Iron Giant. Boy finds robot, boy fixes robot, boy should befriend robot, but in "Fixing Hanover" this is not the case.

Our hero finally gets "Hanover" to work, through a process highly self-reflexive of steampunk ideas, having made "several leaps of logic" and decisions "that cannot be explained as rational," (388) which many might say is true of the whole idea of steampunk itself. There are other such seemingly self-reflexivity, such as the response to the question, "What does it do?" The protagonist ruminates, "Why should everything have to have a function?" This again mirrors some of the cheap criticism leveled against steampunk makings, decrying the point in making a laptop look nicer when it worked fine without the filigree. Within the context of the story, it is as though the inventor who has been able to make functional devices would prefer to be making pointless items which are beautiful, than ever make another functional item. He has seen the dark side of functionality, the ultimate outworking of infernal devices, the kind which function so that life ceases to function. This ideology is subtly present in the narrative, so that when the automaton is finally fixed, one of the villagers "backs away from Hanover, as if something monstrous has occurred, even though this is what we wanted" (390). It's a move performed a multitude of times in film after film, book after book, and story after story, perhaps best embodied in Colin Clive screaming, "It's alive...Alive!" in the 1931 film version of Frankenstein.

"Fixing Hanover" makes for a great companion piece to Moorcock's Warlord of the Air, and could be viewed as inhabiting that same universe, only from the perspective of a man who designed the technology that permitted the British Empire to continue to hold sway in to the late twentieth century. It echoes the sentiments of the Chums of Chance in Against the Day when they finally witness the horrors of World War I. The passage begins with "They took me to His Excellency by airship, of course," which again feels self-reflexive. After all, what else does one travel by in a steampunk story?

"For the first time, except for excursions to the capital, I left my little enclave, the country I'd created for myself. From on high, I saw what I had helped create...The vision I had not known existed unfurled like a slow, terrible dream...I saw my creations clustered above hostile armies, raining down my bombs onto stick figures who bled, screamed, died, were mutiliated, blow apart...all as if in a silent film" (397-98).

Unlike the stereotype of steampunk, when the airships arrive in "Fixing Hanover," it isn't to embark on high-flying adventure. They are war-machines, come to retrieve their creator, and take him home to make more.

"They come at dawn, much faster than I had thought possible...from behind my bars, I watch their deadly, beautiful approach across the slate-gray sky, the deep-blue waves, and it is as if my children are returning to me. If there is no mercy in them, it is because I never thought of mercy when I created the bolt and canvas of them, the fuel and gears of them." (399)

The tone of "Fixing Hanover" is melancholic, to reference Cory Goss' dichotomy of steampunk. It rejects nostalgia for the remembrance of war. It is not anti-steampunk, but rather steampunk dealing seriously with serious issues, a short story to reference when attempting to answer Dru Pagliosotti's question, "Does steampunk have politics?" I don't know if steampunk does, but within the confines of "Fixing Hanover," Jeff Vandermeer certainly does.

You can find "Fixing Hanover" by Jeff Vandermeer in Extraordinary Engines: The Definitive Steampunk Anthology, edited by Nick Gevers. 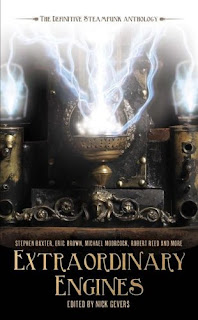