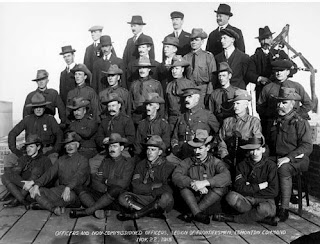 It's Canada Day, and while I spent most of my day relaxing with family and friends, I wanted to pay tribute to the country I was born, raised, and continue to live in. I love Canada, and feel a sense of pride in representing Canadian academia when I'm presenting abroad. Accordingly, I wanted to blog something about Canada in relation to steampunk today. Of all the possible postings I could have made, the one I found most interesting is an actual historical note.

I was doing a google image search for vintage RCMP recruitment posters when I came across a poster looking for men to join the Legion of Frontiersmen, "a patriotic paramilitary organization formed in Britain in 1905 by Roger Pocock, a former Constable with the North West Mounted Police and Boer War veteran, to bolster the defensive capacity of the British Empire." Sometimes real history makes the alternate histories pale by comparison, and while I can't say definitively, having only glossed the websites devoted to the Legion of Frontiersmen, if there was ever a potential starting point for Canadian steampunk, here it is.

What really caught my attention was this article at The Frontiersmen Historian about the proposed purchase of "The Calgarian," an airship intended to protect Canada's vast western prairie (where I am currently located!). The Legion of Frontiersmen apparently took the proposal a step further, advocating for the construction of airships in Calgary, as well as the training of "aerial scouts." While none of these ideas came to fruition, the article also relates the following note, which will be of interest to steampunk aficionados:

The Founder of the Legion of Frontiersmen was convinced from the earliest days that air superiority in air warfare would decide future wars. A fantasy novel "Chariot of the Sun" that he wrote in 1910, but set ahead in 1980, had little success and has fortunately now disappeared, as it would be almost unreadable today. However, he did describe aerial battles with airships and aeroplanes fighting in fleets like ships of the air. The hero who saves the day for Britain is a Canadian.

I couldn't help but think of Bastable's adventures in Warlord of the Air, and ponder at this Canadian precursor. Happy Canada Day everyone.
Email Post
Labels: Airships Canadian Steampunk