The Steampunk Scholar will be at Steam Con! 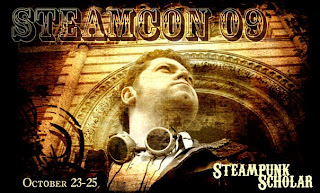 I've known this for some time now, but I wanted to finish up my Eaton reports and the interview with Rudy Rucker before changing the image header at the top of the blog.

I'll be presenting three sessions at the Steamcon in Seattle on October 23-25, and thought followers of the steampunk scholar blog attending the Con would be interested to know what those will be.

Finding Nemo: Verne’s Anti-hero as Steampunk archetype
In the updated, post-colonial English translations of The Mysterious Island, Jules Verne’s anti-hero Captain Nemo is revealed to be the antithesis of the Caucasian pop-culture portrayal made famous by James Mason and most recently continued by Patrick Stewart and Michael Caine: an Indian prince whose real name is Dakkar, leader of the Sepoy rebellion against colonial rule in 1857. It is this Nemo, Verne’s original character, who embodies the essence of the Steampunk aesthetic of the instability of identity through his repeated death-and-rebirth cycle in both novels. Mixing one part recursive fantasy, one part historical criticism, and one part textual analysis, this paper will demonstrate how Captain Nemo is representative of two iconic steampunk identities, as well as suggesting a third possibility for the future of steampunk.

Steam Wars: Steampunk aesthetic meets Space Opera
While steampunk continues to defy attempts at definition, a coherent aesthetic of steampunk artworks has begun to emerge. By establishing a link between space opera and steampunk, and then comparing and contrasting the well-known cultural icons of Star Wars and their steampunk counterparts, defining features of the steampunk aesthetic may be derived. A close reading of individual artworks to identify these defining features as represented by brass goggles, exposed technology, resistance of Empire, and egalitarian treatment of steampunk heroines, reveals why Star Wars, more than any other science fiction (or pop culture) narrative has been successfully retrofitted with the steampunk aesthetic.

Dungeons and Dickens: How to Steampunk your RPG
What happens when a Game Master mixes two of his favorite writers into one gaming world, and those writers are J.R.R. Tolkien and Jules Verne? You get Steam Lords, the steampunked Middle-Earth campaign Mike Perschon and his Edmonton-based gaming group embarked upon over a year ago with thoroughly enjoyable results. Come find out how to apply the brass goggles, airships, and clockwork automatons to your roleplaying campaign, through a discussion of online resources, a brief review of some of the steampunk RPGs, and a look at the best miniatures for steampunk campaigns.