The Difference Engine by William Gibson and Bruce Sterling 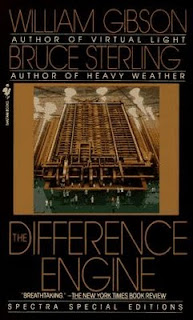 The Difference Engine is arguably the most famous piece of first-wave steampunk literature. In interacting with steampunk fans though, I find that it is oft-tried, but not necessarily finished. Even when finished, it is not always a favorite. And yet, it is often hailed as the best example of steampunk as a genre.

The quality of the writing is undeniable:


Her attention is fixed upon the sky, upon a silhouette of vast and irresistible grace—metal, in her lifetime, having taught itself to fly. In advance of that magnificence, tiny unmanned aeroplanes dip and skirl against the red horizon. Like starlings, Sybil thinks.
The airship’s lights, square golden windows, hint at human warmth. Effortlessly, with the incomparable grace of organic function, she imagines a distant music there, the music of London: the passengers promenade, they drink, they flirt, perhaps they dance. (1)

The juxtaposition of unmanned machine and human warmth is presented immediately to the reader. It will remain a common theme throughout, with the human warmth fighting for prominence of the reader’s attention.

I have read reviews complaining of the near-total absence of the Difference Engine itself, of the lack of action present in Gibson’s Matrix series, or of the way in which the narrative jumps its focus. I think these readers missed the point: the title of The Difference Engine refers to this alternate history’s moment of the break, namely the creation of a working computer by Charles Babbage 100 years before it happened in actual history. Everything about the setting and events is dominated by the ubiquity of the difference made by the Difference Engine. Victorian London was bad, but it was never this bad. But Gibson and Sterling aren’t interested in the Engine itself. They’re interested in the difference it has made in the lives of their characters. Everything we learn about the Engine, we learn obliquely, at least, until the appendix-like fragments at the end of the book. Until then, we are seeing a very different world through familiar eyes.

We have Sybil Gerard, the hooker with the heart of gold, Edward Mallory, adventurous explorer and academic (sans bullwhip, but willing to dive into the fray nonetheless), and Laurence Oliphant, the only historical figure of these three, who hides his work as a spy behind his work as a travel writer: fairly ordinary people for a work of science fiction., especially steampunk. Not one mad scientist, aeronaut, pirate, or bonafide rebel in the bunch.

Like Pynchon’s Against the Day, The Difference Engine seems to be asking, what would it really look like if…? In this case, if the computer had been a de facto reality of Victorian life. The book is often lauded—rightly so—for its gritty realism. The brief mention of the airship on that first page is about as high flying as this book ever gets. But again, this is why I resist the idea of steampunk as a sub-genre. The Difference Engine isn’t really even science fiction – it seems utterly unconcerned with explaining how the Difference Engine works. It is a piece of speculative fiction, speculating on the ramifications of a Difference Engine, not an expository schematic for one. In addition, it’s a bit of a detective/espionage novel, drawing parallels with Chesterton's The Man Who Was Thursday in my own mind. So perhaps it is a steampunked detective story, complete with femme fatale and noir elements.

One of The Difference Engine’s greatest strengths is how immersive the sense of verisimilitude is. I resisted the urge to go and cross-index character names on Wikipedia to discover their historical realities, because I wanted to buy into the one presented by Gibson and Sterling. Having read through it once, I’m convinced it wouldn’t make a bad approach to a second reading, which is why I’m glad for The Difference Dictionary.
It certainly follows the idea of punk as an approach to writing. Albeit nowhere near as non-linear as some postmodern writing has become, their disregard for a single narrative revolving around one character was a bold approach, especially given the high-adventure approach to steampunk by their peers, Powers, Blaylock, and Jeter, conspicuously absent from The Difference Engine. Sure, there’s a moment of gunplay, but for the most part, the novel plods along at a grinding pace. It’s a difficult read, albeit a rewarding one. I would agree with the makers of the Difference Dictionary who have called it a puzzle box. There’s a level on which it works for a first read, but I’m pretty sure that, like Pynchon, a second, closer read will merit some new discoveries.

For the time being, I will end by returning to the contrast of the human with the machine, warning my readers that spoilers lie ahead. To be honest, knowing the ending doesn’t ruin the reading. There’s no surprise ending to ruin, especially if you’ve read Gibson’s Matrix series. The journey of the characters is the thing here, of human flesh and blood in a world become increasingly machine-driven. A consistent theme throughout the book is the idea of extinction. Edward Mallory is a paleontologist, and so he often muses on the extinction of the dinosaurs. One of the major set pieces of the book takes place during a “major episode of pollution in which London swelters under an inversion layer (comparable to the London Smog of December 1952)” (wikipedia). The world is thrown into a darkness of pollution 100 years earlier, like the sun-obscuring black cloud—the cause of which is debated as well—conjectured to have brought about the end of the dinosaurs.

Further, at the end of the book, the reader is given a description of London in 1991 that reads like the opening crawl for a steampunk Blade Runner.


Ten thousand towers, the cyclonic hum of a trillion twisting gears, all air gone earthquake-dark in a mist of oil, in the fractioned heat of intermeshing wheels. Black seamless pavements, uncounted tributary rivulets for the frantic travels of the punched-out lace of data, the ghosts of history loosed in this hot shining necropolis. Paper-thin faces billow like sails, twisting, yawning, tumbling through the empty streets, human faces that are borrowed masks, and lenses for a peering Eye.” (428)

Clearly, the future is not so bright you have to wear brass goggles. It is a future when the Difference Engine seems to have become self-aware, and humans are only conduits for the machine to see through, to use as avatars. Humankind becomes extinct to make way for the next form of life – the machine. Not an original idea, but definitely done in a very original, dare I say steampunk, way.
Email Post
Labels: Novels Technology