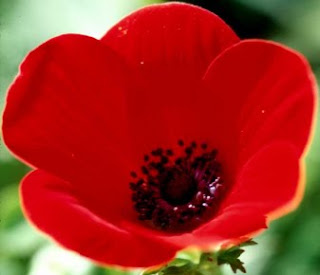 Today, the front page of the Edmonton Journal featured an account of one of Canada's "deadliest battles" in the war in Afghanistan. It reminded the readers of how Canadians have not only fought in numerous wars, but continue to be involved in conflicts overseas. Before putting the paper down, I flipped it over, and paused for a moment to read In Flanders' Fields. One must pause to read poetry. We can read journalism quickly, without thought, but poetry, if one stops to read it at all, forces us to slow down through its structure of lines and stanzas. I thought it an interesting commentary on our culture, that the immediate conflict rates the front page, but this piece of poetry is saved for the back. I suppose I ought to be pleased that it warrants a full page, and not simply a side-bar, but I find myself considering the end of William Carlos Williams' Asphodel, where he writes:


My heart rouses
thinking to bring you news
of something
that concerns you
and concerns many men.  Look at
what passes for the new.
You will not find it there but in
despised poems.
It is difficult
to get the news from poems
yet men die miserably every day
for lack
of what is found there.


What do I get from the news? I get the latest H1N1 information, or lack thereof. I get misleading headlines and celebrity gossip. I get mostly bad news: murder, gangs, war, a failed economy. Letters to the editor are a revelation of how miserably men die every day for the "lack of what is found there", in the news.
I was more heartened by my reading of In Flanders' Fields than by the article of war in Afghanistan. Perhaps that's only because I teach English. English professors and poets are the only ones who give a damn about poetry any more. It's "despised," as William Carlos Williams says. But "my heart rouses, thinking to bring you news of something that concerns you, and concerns many men." I think it is important to pause for reflection on Remembrance Day: we are encouraged to take two minutes of reflective silence to do so. What will we reflect upon? Some will reflect upon the loss of loved ones, some on the glory of fighting for one's country, others will reflect upon the hope of peace.

This is the purpose of poetry. To allow us to pause, and to reflect. It cannot be quickly digested. It must be mulled, not glossed over.  Specifically today, we are encouraged to reflect on the poetry of In Flanders' Fields, which I have copied here for your reflection:


In Flanders Fields the poppies blow
Between the crosses row on row,
That mark our place; and in the sky
The larks, still bravely singing, fly
Scarce heard amid the guns below.
We are the Dead. Short days ago
We lived, felt dawn, saw sunset glow,
Loved and were loved, and now we lie
In Flanders fields.
Take up our quarrel with the foe:
To you from failing hands we throw
The torch; be yours to hold it high.
If ye break faith with us who die
We shall not sleep, though poppies grow
In Flanders fields.


Years working with people who seek peace as a first resort has troubled my reflection of the last stanza, both by their devotion to Peace, and by the words of other poets, such as Wilfred Owen. Like John McCrae, Owen also fought in the first world war, but wrote a rather different piece of poetry concerning it. Here is the text, along with the slide I made for teaching this poem in my introductory English classes:


Dulce Et Decorum Est
Wilfred Owen
Bent double, like old beggars under sacks,
Knock-kneed, coughing like hags, we cursed through sludge,
Till on the haunting flares we turned our backs
And towards our distant rest began to trudge.
Men marched asleep. Many had lost their boots
But limped on, blood-shod. All went lame; all blind;
Drunk with fatigue; deaf even to the hoots
Of disappointed shells that dropped behind.
GAS! Gas! Quick, boys!-- An ecstasy of fumbling,
Fitting the clumsy helmets just in time;
But someone still was yelling out and stumbling
And floundering like a man in fire or lime.--
Dim, through the misty panes and thick green light
As under a green sea, I saw him drowning.
In all my dreams, before my helpless sight,
He plunges at me, guttering, choking, drowning.
If in some smothering dreams you too could pace
Behind the wagon that we flung him in,
And watch the white eyes writhing in his face,
His hanging face, like a devil's sick of sin;
If you could hear, at every jolt, the blood
Come gargling from the froth-corrupted lungs,
Obscene as cancer, bitter as the cud
Of vile, incurable sores on innocent tongues,--
My friend, you would not tell with such high zest
To children ardent for some desperate glory,
The old Lie: Dulce et decorum est
Pro patria mori. 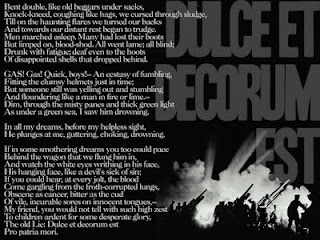 While the Latin lines were well-known at the time of the Great War, few today are likely to see the ironic twist of Owen's final line, which means, "It is sweet and fitting to die for one's country." The title of this poem, translated from Latin, would simply read, "It is Sweet and Fitting," which contrasts immediately with the opening lines detailing the horror of battle. Perhaps, as a variant reflection this Remembrance Day, you would consider reflecting on Wilfred Owen's thoughts as an alternative to the pastoral poppies. Save the slide and make it your desktop today, and pause for reflection, not once, but several times. 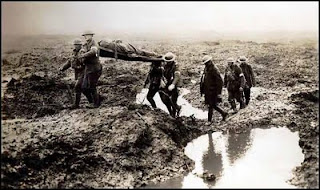 Perhaps you find this suggestion to depart from Flanders Fields misguided, but if you wish to continue to reflect upon the words of John McCrae, I would ask that you leave your poppy pictures behind, and consider this one for your reflection instead, and image of Canadian soldiers at Flander's Fields.
After all, John McCrae might well have been thinking about Longfellow's Aftermath when he penned his words about poppies. In Aftermath, Longfellow presents the reader with what initially seems a nature poem:


Aftermath
Henry Wadsworth Longfellow
When the summer fields are mown,
When the birds are fledged and flown,
And the dry leaves strew the path;
With the falling of the snow,
With the cawing of the crow,
Once again the fields we mow
And gather in the aftermath.
Not the sweet, new grass with flowers
Is this harvesting of ours;
Not the upland clover bloom;
But the rowen mixed with weeds,
Tangled tufts from marsh and meads,
Where the poppy drops its seeds
In the silence and the gloom. 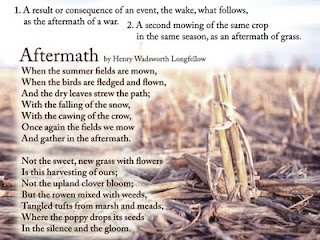 Longfellow utilizes carefully chosen words which all convey images of death, of the passing of life. While we consider "aftermath" immediately as a word associated with calamity or death, it was also understood in Longfellow's day as the second cutting after the initial harvest. The image of cut wheat is a powerful one, of new life cut down before it has time to fully grow, a metaphor for the youth sent to the fields of battle. Students will often cite McCrae's poem to explain why they see the poppy dropping its seeds as an image of death, not recognizing that Longfellow wrote his poem in the nineteenth century, years before In Flanders' Fields. But one has to wonder if McCrae wasn't pondering Longfellow's words, which are simultaneously about a field of harvest, and a field of battle.

What is certain, is that McCrae was not picturing a verdant landscape filled with red flowers, but a once-pastoral scene now turned to horror, the image of the Canadian soldiers standing in Flander's Fields. The poppies McCrae suggests are likely the ones which drop their seeds "in the silence and the gloom." We need the poetry of all these writers to properly reflect upon the nature of war. One perspective will not do, or we fail in our remembrance. If we remember only the glory of war, we fail the memory of Wilfred Owen. If we are dismissive of those who fought for the freedom to "wage peace," then we fail the memory of John McCrae, who asked us to "take up our quarrel with the foe." I suppose so long as we see the foe as another human being, we are doomed to honor this day with front pages devoted to the immediate conflict. My hope is that we might some day only have the past to reflect upon, to remember.
Email Post