Given how late many Steamcon attendees kept the party going after Abney Park finished on Saturday night, I was dubious about what kind of crowd I'd have for my last session, "Steam Wars: Steampunk Aesthetic meets Space Opera." Based on the paper I'd submitted to the Journal of Neo Victorian Studies, the presentation is about the steampunk Star Wars images produced by Eric Poulton and other artists for the challenge issued by CG Society. I'll have to learn to never underestimate a fan's ability to get up early, especially when you're presenting a mash-up on two of their favorite things. One of the first attendees in the room had a full-sleeve tattoo of Star Wars characters, in addition to a cool steampunk-mechanic outfit (which underscored my point about steampunk heroines in the presentation rather nicely, now that I think back on it). 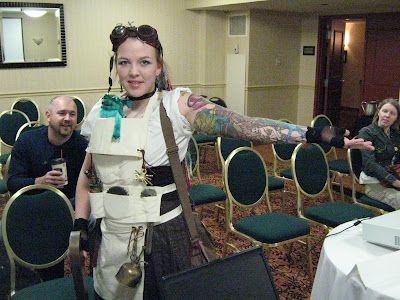 There were friends in the room, both new (Kevin!) and old (Chris and Linda, and Daniel and Autumn, come to say farewell before boarding their flight home). The discussion was lively even before I got started, and continued out into the hallways once again. While I was standing there, chatting with panel attendees, I was greeted by Alisa Green, who was my touchstone via email in the months leading up to Steamcon. It was great to put a face to the name, and I was really impressed that she had made the effort to track me down and say hello. That's a definite plus for Steamcon - the people in charge were very personable, and available. You could tell the weekend had taken its toll on them, but they weren't showing it in demeanor - they maintained a very Victorian stiff-upper-lip, even though they looked ready to collapse.

Jenica had gone to do some quick shopping, so I had time to hit the vendor room: I'd already picked up a print of Myke Amend's "The Rescue" on Saturday in the art gallery, and I added Girl Genius Book Four, Heart Breakers and Boilerplate, and some goggles for a friend back home to my acquisitions for the weekend. Exiting the vendor's room, I entered into a conversation with an Alaskan pilgrim who had been in my "Dungeons and Dickens" session, and had provided a lot of positive non-verbal feedback. We found some comfortable seating and engaged in a great conversation about gaming and books for the better part of an hour, until Jenica returned, and it was time to pack, and head to the airport. 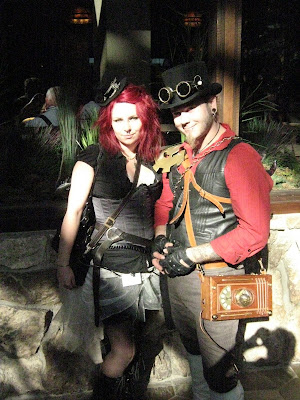 While it was mainly out of necessity that we headed back on Sunday, it was another major difference between Steam Powered and Steamcon. I stayed after everyone had finally gone home in Sunnyvale, but was an early departure from Seattle. Unless I absolutely have to, I won't be repeating that. This sort of immersive experience needs some time to process and unwind, and exiting the surreality of Steamcon to arrive home in my mundane reality back home (with Jenica and the kids still in Kelowna!) was a bit of a downer. I've already made plans to leave earlier and stay later for the Nova Albion Steampunk Exhibition. 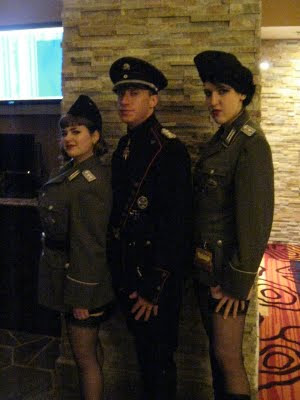 Nevertheless, Steamcon had me on enough of a high that I was able to ride it into the week that followed. Since I'd had Jenica and our friends along, we were able to reminisce, which extended the experience, in a way Steam Powered didn't, because all the people I'd experienced it with had remained behind. Aside from the annoyance of tophats at the concert, the weekend was a huge success - by now everyone is aware that they'd planned for around 800, and ended up with around 1300. Given the success of Steamcon, and the proliferation of  steampunk conventions sprouting up across North America in 2010, I think we can safely say that rumors of the demise of steampunk, have been greatly exagerrated. 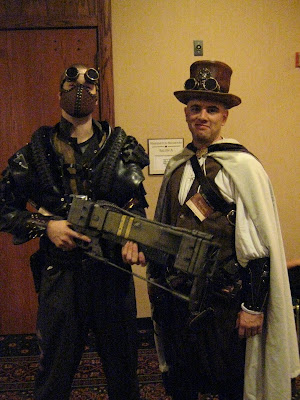 Kudos to Martin, Diana, Alisa, and all the rest of the folks who made Steamcon happen. I can't wait for next year's event, which is already themed: "Weird Weird West." I think I see a presentation on Joe Lansdale, Jonah Hex, or Deadlands on the horizon. Here's hoping the world still needs a steampunk scholar come next fall. 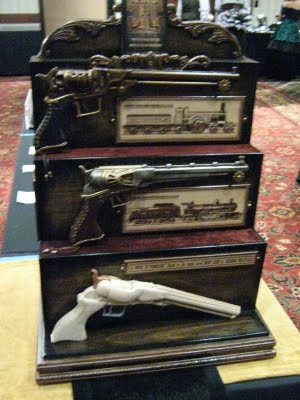 Todd Lovering's incredible hand-carved Hastin pistols.
These are definitely on my Christmas list.