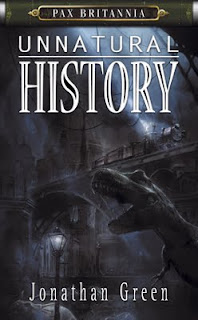 I had promised earlier in this project that I wouldn't resort to merely reviewing books or films, but commenting on how they contribute to the work of discerning the aesthetic of steampunk. However, if I were to merely comment on the steampunk elements in Jonathan Green's Unnatural History, I might be misleading my readers in thinking it's a book worth picking up. Then again, perhaps my comments alone will reveal my bias towards what I would unreservedly say is some of the worst writing I've ever read in my life. I've had three months to contemplate that statement, so I don't say it lightly.

Unnatural History is the first in a steampunk series called Pax Britannia, published by Abaddon books. The back cover includes an endorsement by Clive Barker, which I can only hope was referring to some other title published by Abaddon. I took Unnatural History on summer vacation with me, knowing it was likely to be pulpy fare, given the description of the hero, Ulysses Quicksilver on the bookjacket: "dandy, rogue, and agent of the throne. It is up to his dashing soldier of fortune to solve the mystery and uncover the truth before London degenerates into primitive madness and a villainous mastermind brings about the unthinkable." Some of my best childhood memories are of reading Conan or Doc Savage paperback reissues on beaches, so it seemed appropriate. Jonathan Green might be (and I hope he is) attempting to emulate a pulp writer by writing poorly, if that's his agenda he's overshot his mark. Both Robert E. Howard and Kenneth Robeson (Lester Dent) had their moments of bad writing, but the brilliance of their raw creativity shone through nonetheless. I can still read both Conan and Doc Savage without feeling the need to pick up a red correcting pen.

With Jonathan Green, I not only picked the pen up, I made good use of it. I could be an arrogant bastard and say I want his job, but I'll settle for his editor's. This book has enough writing errors to fill a semester of teaching composition, from lack of precedent to horribly mixed metaphors, ridiculously wordy prose to word choice errors. And this is just the technical side of his writing.

I was hoping that, despite the technical issues, the story itself might be worth reading, or at the very least, for recommending to younger adolescent readers. I can suspend my need for cutting edge special effects when I see a film, so why not suspend my need for correct grammar?

This was not the case. Before I move on, I'll recommend some good steampunk for the YA set: Airborn by Kenneth Oppel, Mortal Engines by Philip Reeve, or Leviathan by Scott Westerfeld.

Thankfully, Mr. Green's missteps were as revealing as other writers' leaps and bounds.

Firstly, Green has created an alternate history where the British Empire, and strangely, Nazi Germany have survived into the 1990s. I'm dubious about the likelihood of the rise of the Third Reich if Britain was still a powerful world Empire, but I was willing to let it stand for the sake of fun. Sadly, Green's neo-Victorian '90s, while playfully amusing at times (he seems to suggest Michael Crichton as a major professor of Evolutionary Biology), reads like a catalog of all the things the Victorian era is presented as in steampunk, and yet in its best iterations, never really is. There are airships, Victorian slang (toadies and toffs), and of course, a "brown velvet frock coat" (13). What could be more steampunk? The problem with Green's approach is that he writes as though he doesn't understand history--there are few explanations (I can only hope they are forthcoming) about why the world is still stuck in a very proper and British nineteenth century.

Now, one might argue that I'm being unfair, and I should just let Green have his fun, but as a critical scholar, I expect good historical research and speculation, even in a mindless adventure story. Consider how Paul Guinan used primary historical sources in writing Boilerplate, or the use of Henry Mayhew's writings on the London poor in Jeter, Powers, and Blaylock's steampunk novels of the '80s. Even when a writer conjectures a future, rather than an established past, there must be a believability to it. Stirling's Peshawar Lancers is a dense read, because he's gone to the trouble of extensive world-building. This is a standard task for the writer of SF and Fantasy. If your world doesn't hold together, your story won't either. Because we know little about the why of the setting of Pax Britannia, we find it hard to imagine, hard to see what characters look like - what are they wearing? Are brown frock coats back in style, or did they never go out?

Second, Green's hero, Ulysses Quicksilver, is a pulp hero without any real post-colonial sensibilities. While he has some rogue tendencies, he is still an unswervingly loyal agent of the Crown. He is a caricature of a number of other heroes, most notably Batman and Doc Savage - a mix of brawn and brains, neither of which are delivered well: the brains always seem to be something Quicksilver is lucky enough to stumble upon, rather than a logical deduction. The brawn is likewise without precedent until Quicksilver needs it. While he makes a passing reference to Tibetan monks, it is only in the heat of a battle that we learn that Quicksilver would survive this fight, "thanks in part to the martial arts he had learned in the company of the Tibetan monks" (68). It was like reading a book written by a gamer: "Oh, and by the way, my character learned martial arts when he was in the Himalayas." Green adds injury to literal insult when he writes that Quicksilver "push[es] a foot into [the creature's] midriff." Perhaps I'm being overly pedantic(and if this were the only instance of Green's poor word choice, you might be right in saying so), but 'midriff' is word without combat connotations. You "kick" in the "stomach"; you do not "push" in the "midriff", no matter how much you're trying to emulate what you suppose to be the polite manners of Victorian style or culture. But I digress -- I'm supposed to be talking about how Quicksilver is a caricature.

When hired by a beautiful woman to find her lost father, Quicksilver is said to be unable to "resist a pretty face, and when that pretty face belonged to a damsel in distress it made any attempt at resistance even more futile" (57). If Green were clever enough to write with an ironic tone, I could swallow this sort of writing. However, while he's not taking himself too seriously, he's also no Pynchon. While this serves as a femme fatale plot device later on, it's handled poorly. In short, Quicksilver is Moorcock's Bastable without the narrative conceit of time travel to explain his idiosyncracies. As with the secondary history itself, one wonders how such a cultural dinosaur could have survived a century. Even with the continuation of the British Empire, societal change would have been more advanced. Britain before Victoria was very different from Britain after Victoria. The world of Pax Britannia reads mostly like a historical neophyte's idea of what a steampunk universe would look like. And while steampunk doesn't have to be about alternate real-world histories, Pax Britannica is. And it shows what happens to the steampunk aesthetic when history is ignored.

One of the ribbons at Steamcon stated that "Steampunk needs historical accuracy like a dirigible needs a goldfish." While this quote, attributed to Steamcon coordinator Diana Vick, is true for convention Cosplay, it is mostly wrong when applied to steampunk literature. Even within a fully secondary world, historical "accuracy" lies at the heart of steampunk narratives being quality instead of quagmire. There must be an inner consistency to the alternate history or the possible world, or the reader cannot negotiate the narrative's virtual spaces. Setting is as important as character, and when both are poorly rendered, as is the case in Unnatural History, the end result is a muddled mess.

At one point Ulysses muses that "there were many unexplained mysteries in the world -- such as who built the giant heads of Easter Island and the mystery of the Whitby mermaid -- and Ulysses had solved some of them in his time, but how Maurice Allardyce had ever made it to inspector he would never know" (48). I feel much the same way about how Jonathan Green got a contract to write not one, but four of these novels. Worse yet, I own all of them, and for the sake of academic research, will likely read them all. I can only hope Green gets better as he goes.

NOTE: El Sombra, The second novel in the Pax Britannica series, was written by Al Ewing, and while it will never be considered literature, it fulfilled all of the hopes I had for Unnatural History without any of the writing faux pas. I'll be blogging about it soon. To my new readers from Steamcon - I'll be putting some of the slides up in the next two weeks, as well as reporting on my experiences at the convention.