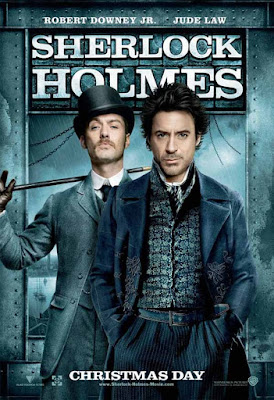 From the odd review or Facebook comment I'd seen about the film, I was prepared to enjoy two hours of a sort of recursive fantasy, a film about the icon Sherlock Holmes rather than the character from the Sir Arthur Conan Doyle novels and short stories. I have no axe to grind when it comes to film adaptations involving characters who have hundreds of adaptations ranging from slavishly devotion to the original texts, to invocations in name only. Sherlock Holmes is like Dracula - we all know who they are (or more accurately, have become), even if we haven't read the original books. So while I remain a stolid canvasser for an accurate Nemo, I'm more than willing to let both the world's most famous detective and most famous vampire undergo artistic liberties. They've both had great adaptions of the original works that gave them birth.

While I was prepared for some wild departures from the original Holmes, I wasn't prepared for the presence of some steampunk elements. There's always the chance when dealing with Victorian adventure for something approximating steampunk to make an appearances, but Blackwood as the dastardly villain with an Infernal Device was straight-up steampunk. That isn't to say I'm arguing for the film as a steampunk movie. Remember - I don't really see steampunk as a genre, but rather an aesthetic applied to genres. In this case, Holmes has received a slight steampunking - the costumes alone would lend credibility to my argument, (SPOILERS AHEAD) but I'll let it stand at the chemical weapon revealed at the end of the film. There are other arguments for including the film as part of my research, but I'm most interested in the standard adventure plot with an evil villain seeking to take over the world with his advanced technological terror. While this is commonly recognized as one of the supposedly inherent plot devices in steampunk, I'd argue it's inherent to James Bond films, and Guy Ritchie has made a neo-Victorian James Bond film, replacing the huge laser beam from Goldfinger with a chemical weapon designed by Jake von Slatt.

On a more personal note, I thoroughly enjoyed the film, all the more because I've been thinking a lot about Sherlock Holmes while reading Mark Frost's The List of 7, which chronicles the adventures of Sir Arthur Conan Doyle and the mysterious agent of the Crown Jack Sparks as psuedo-historical Watson and Holmes. Frost's snappy dialogue between Doyle and Sparks is echoed by Jude Law and Robert Downey Jr.'s performances. I'd be interested to know if The List of 7 was any inspiration for the screenplay, and if not, to suggest someone capitalize on the current popularity of Sherlock Holmes by making a film of it.

I should also mention how satisfying it was to see the theater packed, over a month after the film's release. It made me wonder if, given the rapid proliferation of steampunk conventions across North America as well as the UK; the appearance of steampunk fashion in everything from the New York Times to recent Victoria's Secret runway shows; and the popularity of this Holmes film, if we aren't just around the corner from steampunk's "tipping point". It seems like we're on the cusp of steampunk going mainstream. Time will tell. While I know there are a lot of you who hopes this stays a subculture, I'm kind of hoping it means we'll finally see a decent steampunk movie. If Sherlock Holmes is any indication, it seems rather elementary.
Email Post
Labels: Movies recursive fantasy Sherlock Holmes