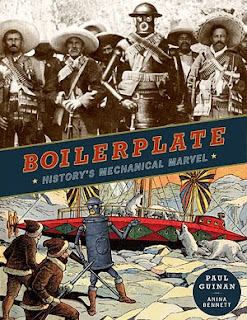 Boilerplate is not steampunk.

At least, not if you consider steampunk a genre, which I don't. I know I mention this a lot, but since people can drop in and not have a context of the discussion here at Steampunk Scholar to date, I want to continue making it perfectly clear that I don't consider steampunk a genre. I've probably lapsed at times into making statements that it is, early on in the research, but I'm doing my best to avoid those statements now. Steampunk is an aesthetic, applied to art forms, narrative structures, clothing, decor, and apparently, coffee table books. At best, I can say that Boilerplate is a historical coffee-table book with a very light dose of the steampunk aesthetic.

Boilerplate is a coffee table book about "the world's first robot soldier," a sort of fin de siècle Forrest Gump. Upon first glance, the combination of Anina Bennett's documentary-style prose and Paul Guinan's nearly flawless Photoshop-fakery may cause the casual reader to wonder, "Is this for real?" As such, it's a brilliant, albeit completely unintentional hoax. If you're foolish enough to buy Boilerplate as historical reality, then you'd be stupid enough to think that all the war-time bombast and "boy's adventure story" homages were jingoistic, in praise of some dark moments in American history. The key to reading Boilerplate is found on page 115, where Bennett quotes Lawrence of Arabia under the header, "Documents are Liars":

"Remember that the manner is greater than the matter, so far as modern history is concerned. One of the ominous signs of the time is that the public can no longer read history. The historian...learns to attach insensate importance to documents. The documents are liars. No man ever yet tried to write down the entire truth of any action in which he has been engaged. All narrative is partis pris...We know too much, and use too little knowledge."

Bennett told me that the finding of this quote was cause for excitement: it is clearly a self-reflexive moment, a slight "winking at the camera" to make the reader stop and consider the document(lie) they're holding in their hands. The difference between Boilerplate and other historical coffee table books is that Boilerplate knows it's a lie, admits it's a lie with the preposterous nature of its hero, and then goes on engaging in a balancing act between narratives of its fictional robot, creator, and creator's sister, and narratives of American history: there is enough reality in both the text and the images that the reader is constantly wondering where history leaves off and fiction begins. Wikipedia, dubious historical source that it is, suddenly becomes the companion to Boilerplate, as you enter name after name, or event after event, trying to know "what really happened."

I'll save you some of the trouble. It all happened, it just happened without a Mechanical Marvel created by Archibald Campion. All references to Campion, his sister Lily, Edward Fullerton, and Boilerplate are pure fiction, creations of Guinan and Bennett, while others, such as Frank Reade Jr., "creator of the Electric Man" are bits of recursive fantasy: Reade Jr. was the son of the hero of the Steam Man of the Prairie Eddisonades (his father is involved in building a steam-powered body for Buffalo Bill Cody's pickled head-in-a-jar in Joe Lansdale's weird-west steampunk adventure, Zeppelins West). These fictional characters are thrown into the histories of Nikola Tesla, Theodore Roosevelt, and Pancho Villa, to name a few. But like Forrest Gump, Boilerplate is merely present at pivotal events in U.S. history. His presence changes nothing. Unlike alternate histories where counter or contra-factual possibilities are explored, Boilerplate posits no point-of-change. The premise of the book is that Boilerplate himself is a somehow forgotten piece of history, the mechanical marvel you never heard of: at Boilerplate's unveiling at the World's Columbian Exposition, "simultaneously the best and the worst place to introduce an invention as innovative as Boilerplate", the robot is obscured by wonders such as hamburgers, picture postcards, and the Ferris Wheel.

My hat is off to Guinan and Bennett. They're very good at subversive subtext. If it seemed rather preposterous that the world would forget a robot meant to replace human soldiers in war over chewing gum, you need only to consider what makes front page news these days. Consider how in the early 90s we were more concerned with Milli Vanilli lip-synching than we were with the Siege of Sarajevo. By saying that Boilerplate got lost in the entertainment morass of the Columbian Exposition, Bennett might be saying we're missing something too. 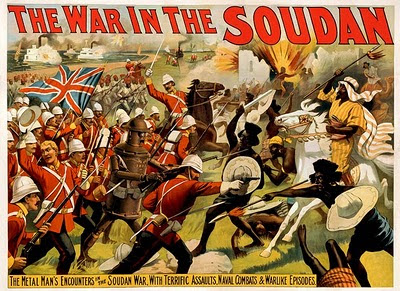 Or consider this image of Boilerplate fighting at "The War in the Soudan" on pages 46 and 47: Boilerplate is show, gun in hand, charging side-by-side with British troops into ranks of Sudanese soldiers. The caption beside the image reveals that "Boilerplate never participated in infantry charges such as the one in this poster. Rather, the robot helped build the rail line depicted at the top of the illustration, in the background" (47). Given that the poster is a mix of fact (an actual poster celebrating the 1896-98 Sudan campaign of Gen. Horatio Herbert Kitchener) and fiction (the Boilerplate figure), we need to ask why Guinan bothered to go to the trouble of digitally compositing Boilerplate into the image. Further, why has Guinan and Bennett created a book that is simultaneously so historically accurate (Guinan worked with primary historical sources for his research of the 1871 "First Korean War") and yet so clearly fictional?

The answer is nowhere as clear as page 65, where Boilerplate is pictured standing with young coal miners, opposite a page titled "Childhood's End", detailing the "harsh life of child workers" in industrial America. While the image without Boilerplate, coupled with the historical facts are powerful enough, most of us would readily admit we're unlikely to purchase a coffee table book about child labor. Of course, Boilerplate is about more than just child labor. It's about the Panama Canal, and how 27,500 workers at the Canal died of malaria and yellow fever. It's about The Boxer Rebellion, and the situation of women in America at the turn-of-the-century. But it's about these things, told from the perspective of Archie and Lily Campion, along with their mute mechanical marvel. Lily Campion acts as the voice of moral outrage towards child labor while Boilerplate stands dumbly behind the children, looking out at us, impotent to do anything about this undeniable historical reality:


"Seldom have I seen true fury burning in my brother's eyes...Though we do not speak of it, I know that he and I feel a kinship with this children, having been orphaned ourselves. We are fortunate that we were never reduced to such piteous desperation as these waifs who spill their blood that we may have fine gloves and warm parlors." (65)

Boilerplate's presence in these images is a powerless one within the narrative of the text. Archie Campion's dream of replacing human soldiers with an army of Boilerplates is never realized. And yet, the robot is potentially very powerful, should the reader have ears to hear and eyes to see.

Paul Guinan was the Artist Guest-of-Honor at Steamcon 2009. There was no small irony to Guinan's presence at a Con which had the phrase "Steampunk needs historical accuracy like a dirigible needs a goldfish." I make no bones about steampunk costuming - combine Le Chateau fashions with 19th century bracers, and stick a ray gun on top for good measure. I have no issue with these things. But as the cliche goes, if we ignore history, we are doomed to repeat it. Boilerplate not only acts as a commentary on the past, it also acts as commentary on the present: the issues dealt with in its pages are still dealt with today. And while the average steampunk fan isn't likely to shell out $30 for a book on the Pullman labor strikes, he will shell out $30 for a well-packaged hardback about a Victorian-era metal-man. And in doing so, may learn something about history, as well as the present.

NOTE: I am no longer convinced that alternate history is a requisite for the steampunk aesthetic. Alternate history posits a moment of change, which steampunk doesn't always do. I think Diana Vick's statement about historical accuracy is correct, to a point. Steampunk largely ignores historical accuracy. That doesn't mean that steampunk should ignore historical accuracy, even in cases where it is the history of a secondary world, as in Stephen Hunt's The Court of the Air, Emilie P. Bush's Chenda and the Airship Brofman, or Ekaterina Sedia's The Alchemy of Stone. Tolkien was a student of history, and was rigorous in establishing the history of Middle-earth. Steampunk authors need to be as rigorous, or they run the risk of writing weak adventure novels which forget the sorts of historical shadows Guinan and Bennett explore obliquely in Boilerplate's adventures.

I'll also add that I've written a teacher's guide for Boilerplate, which is available at the Abrams' Boilerplate website. I'll be posting further on how I think Boilerplate is a useful text in upcoming posts on "Teaching Steampunk".
Email Post
Labels: Alternate History Anina Bennett Automata Boilerplate Paul Guinan Technology