Casting Call for 20,000 Leagues Under the Sea 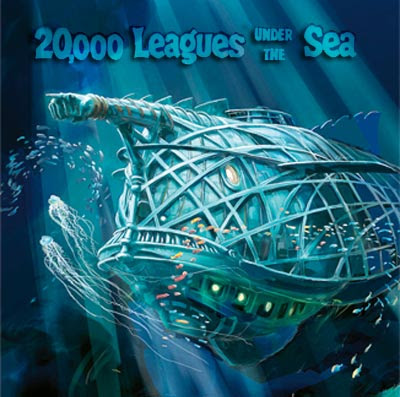 Last semester I taught 20,000 Leagues Under the Sea in my Intro English course at the King's University College. On the final exam, as a means of assessing how well the students understood the four main characters, I asked them to cast a hypothetical film version of the novel. Given that it's Verne's birthday this month, and that Disney has abandoned their Nemo prequel (blessing or curse?)and there's talk of Sam Raimi taking things over, here are the results. I've only included actors who received more than one vote, with some one-vote honorable mentions for what I consider laudable choices:

Comments: Since Tahir is my choice as well, I applaud the students who chose him, knowing full well this choice was predicated by my saying as much in the lectures. I love Oded Fehr's look, but I'm not sure he has the acting chops to pull off the complex nuances of Nemo's character, being both villain and hero. Sean Connery might possibly be the worst choice, based on my reasons for wanting an Indian or Pakistani actor to play the Captain. The choice of Connery was made worse by the reason most often given: he'd already played a submarine captain in The Hunt for Red October. Connery is the king of casting-call cop-outs, which occurs when a person can't think of the right person for the role, so they just pick their favorite or the most famous, which is likely how both Naveen Andrews and Robert Downey Jr. made this list as well. While Andrews has the right look, he doesn't strike me as old enough or a powerful enough onscreen presence. Thankfully, not a one of them suggested Will Smith.
Honorable Mentions: Erick Avari (a probable choice if it was being made for television) and Alexander Siddig.

Comments: I like Neeson, but he's too strong a presence, and Aronnax's adoration of Nemo would be a difficult sell with Neeson in the role. Elwes is too pretty, Broadbent is too old, Depp is overexposed right now, Reno has too much baggage playing dangerous characters, and Cage is in the list for the same reason Connery was for Nemo: he played a professor type in National Treasure, so he could do it again...blahblahblah. Nic Cage is one of my least favorite actors, so he won't be in my version. I like the suggestions of Fiennes, and Gryffud, but personally settled on David Thewlis, because he's a capable actor, the right age, and can likely handle a French accent. I refuse to have Aronnax speak in anything else. If anyone could suggest a French actor who fits the bill, I'd love to hear the suggestion.
Honorable Mentions: Anthony Stewart Head, who was the quintessential geek-culture academic as Niles on Buffy, and Colme Feore, who could handle the French accent (but is sadly too old - Aronnax is 40).

Ned Land:
Hugh Jackman 10 votes
Gerard Butler 3 votes
Brendan Fraser 3 votes
Brad Pitt 3 votes
Ryan Reynolds 3 votes
Comments: I love the casting of Hugh Jackman, and if he can handle a French-Canadian accent, he's in. The other suggestions are standard action-hero actors, and I don't think any but Butler could really pull off the seething cauldron of rage Ned eventually becomes. No one chose my pick, which is Jean-Claude Van Damme. After seeing him sporting a beard, and really acting (to the point of tears!) in JCVD, he's my first choice. I think Van Damme could do something really awesome with the right script, and Leagues could definitely be that script.
Honorable Mentions: Bruce Campbell - if I was doing a campy send-up of the Disney version, Bruce would be my Ned Land. I can just imagine him singing "Whale of a Tale".

Conseil
Sean Astin 6 votes
Michael Caine 6 votes
Rob Schneider 6 votes
Comments: Conseil is clearly the most difficult character to cast, as there was nearly no consensus outside these three. Students admitted this in their answers, stating that his phlegmatic personality plus providing the comic relief made him a very difficult persona to cast. I agree completely. Sean Astin got picked for his Conseil-like performance as Sam in Lord of the Rings, while Michael Caine, although far too old (Conseil is only 30!) is a shoo-in for his performance as Alfred in the revamped Batman films. While I have a perverse interest in seeing if Rob Schneider could actually pull off a dramatic role, Conseil isn't just comedy. Many students chose comedians or comic actors for the role, mistaking Conseil's subtle humor for Jack Black's over-the-top shtick. Ultimately, I agree with the student who chose Orlando Bloom, who is the right age, and can play a low-key background character. While he's been typecast as the action hero, films like Elizabethtown have displayed the subtle side of his abilities. I have no idea if he could do a French accent, but here's hoping.