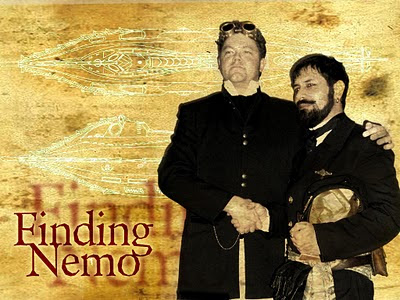 Today is Jules Verne's birthday. You'd think, given the way Google will tailor their logo for the anniversary of Sesame Street or the birth of just about every other famous writer or historical figure, there would be a Nautilus or something up there today. It seems it remains up to the Verne fans to keep the flame alive.

To that end, I'm posting a link to my first published academic article on steampunk, which I first wrote as a term paper for my PhD coursework in 2008, then presented at the Eaton Science Fiction Conference in 2009. Verniana, the online, open-source journal of the North American Jules Verne Society, requested what they deemed the best papers from that conference. I was fortunate enough to be considered one of those papers, and worked on revising and editing the paper over the past nine months to be ready for its final iteration at Verniana. This has been a major achievement for me - my goal had been to be among the first articles in academic scholarship published on steampunk, post-Stefan Hantke's 1999 article in Extrapolation.

Verne is definitely one of the precedent writers for the steampunk aesthetic, and this article suggests Nemo as a proto-steam-punk, using the term as a noun, to refer to a type of neo-Victorian hero. Here's the abstract, and a link to the page where you can read the article (and many others - I recommend perusing Howard Hendrix's article - it's fantastic!).

In the foreword to his annotated translation of Jules Verne’s 20,000 Leagues Under the Sea, Walter James Miller suggests that Verne’s image was in need of rehabilitation due to the plethora of poor English translations his works have suffered. With the emergence of better translations, the same need for rehabilitation has emerged for Captain Nemo, the anti-hero of Verne’s underwater adventure tale. In the updated, post-colonial English translations of The Mysterious Island, Nemo is revealed to be the antithesis of the Caucasian pop-culture iteration made famous by James Mason and most recently continued by Patrick Stewart and Michael Caine: an Indian prince whose real name is Dakkar, a leader of the Sepoy rebellion against colonial rule in 1857. It is this Nemo, Verne’s original character, who embodies the essence of the Steampunk aesthetic of the instability of identity through his repeated death-and-rebirth cycle in both novels. Mixing one part recursive fantasy, one part historical criticism, and one part textual analysis, this paper will demonstrate how Captain Nemo is representative of one of the core elements of the Steampunk aesthetic, namely the redefining of identity.