Chenda and the Airship Brofman by Emilie P. Bush 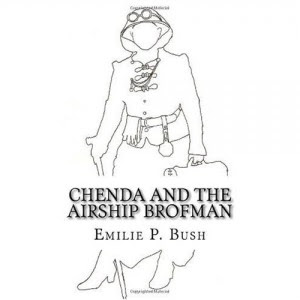 Chenda and the Airship Brofman is the self-published first novel from Emilie P. Bush. It's a sort of bildungsroman, relating the adventures of Chenda Frost, a recently-widowed young lady. Sheltered up until her husband's death, Chenda becomes the "richest woman in the Republic," as well as the inheritor of mysterious blue stones, which force her to become a fugitive: forced to quest for the secret of the "singing stones" and a new identity for herself.

Chenda is what I expect from self-published novels: in desperate need of a professional editor, and fraught with the sort of mistakes most new writers frequently make: multiple changes in point-of-view within a scene, poor diction, inconsistent character voice and action, conflicting tone, use of all-caps for shouting, excessive punctuation, and a lack of thematic unity. Chenda's traveling companion, Dr. Candice Mortimer, is introduced as a strong, independent female, and by half-way through the book has been undone by a particularly robust kiss from the Airship Brofman's captain, after which she lacks the same agency and necessity she had at the outset, replaced in many ways as Chenda's aide by members of the Brofman crew. It was frustrating to engage with Dr. Mortimer with her initial echoes of Philip Pullman's Mrs. Coulter without the evil, and then find her weak-in-the-knees not too long after. Bush also has a propensity towards dropping into modern vernacular, which felt terribly out-of-place in the pseudo-Victorian secondary world Chenda takes place in, with the use of "gonna,' "Who-wee!" "Man alive" and "I went bonkers" from the heretofore erudite Dr. Mortimer. While it's possible that persons living in a secondary world could say anything, this was a lack of consistency, as opposed to the way in which elves and dwarves use current colloquialisms in Michael Swanwick's The Dragons of Babel, which is intended to say something about that secondary world.

In commenting on what Chenda and the Airship Brofman brings to the steampunk aesthetic, it is this use of a secondary world which resembles our own Victorian era in some ways, but allows for the creation of magical technologies, such as the Singing Stones which possess a perfect crystalline structure and therefore emit an amplified, clear musical tone upon being struck, as well as glowing from within. I won't say what these stones do, as such a spoiler is unnecessary for my purposes, and provides one of the page-turning devices in the narrative. In writing Chenda in an entirely secondary world, Bush joins the ranks of steampunk writers such as Stephen Hunt, Ekaterina Sedia, Allan Campbell and Dru Pagliasotti. While this may seem incidental, it's a key facet of steampunk writing since 2000, and challenges the idea that steampunk "takes place in a history that never was." In the case of Chenda's world and other steampunk secondary worlds, the action takes place in a world that never was. While this can be an excuse for a writer to be lazy in their attention to history, it should rather constitute a more rigorous exercise in world-building. One of the greatest challenges to the writer of fantasy is the construction of a coherent, believable secondary world. This is a hallmark of fantasy fiction, and writers who do it well win loyal readers. Writers who do it out of a lack of desire to attend to rigorous detail show their colors very quickly, and fans of fantasy are quick to reject such lazy writing. Bush is somewhere in-between these poles. She's developed elements of a believable world, but on the whole it lacks a credible cohesion. The technology she's imagined for it is great; the society of the Tugrulians is a caricature. At it's best, Chenda's world is filled with cool steampunk marvels; at its worst, Chenda's world is too simple, lacking the sort of cultural complexity real-world societies exhibit.

While my professional demeanor behooves me to comment on the technical problems of Chenda, lest I give the impression it is a flawless work of art, I must admit that Chenda, the one character Bush writes with a fairly consistent voice, is compelling. I wanted to know how things turned out for her, and while I was disappointed in what felt like a deus ex machina conclusion ala Paul Atreides, I thoroughly enjoyed a few of the early moments of personal transformation. The first of these is a bit clichéd, utilizing fire to burn away Chenda's former life. The second of these is much better, and makes good use the airship Brofman to do so:

The Brofman moved faster, heading east. Chenda stood there, alone and afraid ... As the Brofman advanced, the tears in Chenda's eyes spilled out onto her cheeks [and were] quickly blown away ... She wrestled with the pain and fought to control it. The wind pulled at it too, working against her, trying to drag it all up to the surface.
More tears. More pain. More wind.
When the struggle to contain it became too much, she gave up. Chenda let the wind take what it wanted from her. In letting go of her baser emotions, she found a kernel of strength. Chenda pulled her hands free from the railing and ... leaned into the wind. More regret and anguish for Edison bubbled up, and then blew away. Chenda took a step forward. The airship moved faster. The wind grew stronger. She pulled up worry and dejection, and tossed them toward the greedy air...
She raced forward to the bow of the airship, her eyes flowing with tears for Edison. Every drop of her grief flew away as she gazed into the open sky ahead of her. She opened her mouth to wail, and the wind reached inside and stole the lament from her...
Soon Chenda felt her eyes stop overflowing with tears. She had run dry of all emotion and felt hollow, but in a hopeful way, anticipatory. Now that she was empty, she knew it was only only a matter of time before she started to fill again ... The empty space felt like a promise. (66)

This passage is one of my favorites, as it utilizes the fictional space of the airship in a thematic way, to physically manifest leaving one's cares behind. But it is also why I was disappointed in where the story went: after Chenda's personal transformation aboard the Brofman, I kept wondering how else this airship would figure into her journey of becoming: sadly, it didn't. Given the title, I had imagined that the airship would be pivotal in her progression from dependent widow to independent aviatrix. But any further commentary here would be me conjecturing the book I think Bush should have written, instead of assessment of the one she did. And there's something important to note there: while some will read my words as harsh criticism, I can only hope you're also hearing that I see a lot of promise in Bush's writing, and think she deserves applause for sheer nerve and drive. Self-publication, even in this day and age is nothing to sneeze at. Remember, I'm a jaded academic: I read for meaning. And I should also relate that nearly all those technical mistakes I listed above I've found amongst books I peruse the best-seller rack at the airport. At the very least, I can say this much: I've tried reading Twilight twice, and failed both times out of sheer revulsion for Stephanie Meyers' writing style. I finished reading all of Chenda. So if you read for pleasure and love a good adventure-romance, then you might enjoy Chenda and the Airship Brofman.
Email Post
Labels: Airships Novels Secondary Worlds