The Glass Books of the Dream Eaters by Gordon Dahlquist 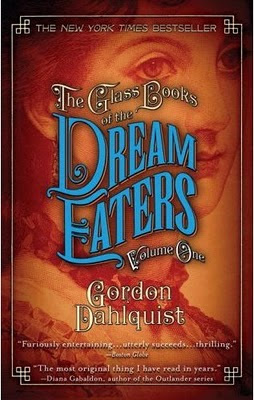 I absorbed Gordon Dahlquist's The Glass Books of the Dream Eaters as abridged audio, and augmented that with reading what the audio omitted. Sadly, while I was reading, I wasn't doing as much highlighting or annotating as I normally do, so my thoughts are going to be less detailed than they normally are. Instead of just analyzing details about what Glass Books contribute to the steampunk aesthetic, I want to reflect on Glass Books as an example of steampunk in mainstream fiction. First, a quote:


"For even the finest writer of horror or SF or detective fiction, the bookstore, to paraphrase the LA funk band War, is a ghetto. From time to time some writer, through a canny shift in subject matter or focus, or through the coming to literary power of his or her lifelong fans, or through sheer, undeniable literary chops, manages to break out. New, subtler covers are placed on these writers' books, with elegant serif typefaces. In the public libraries, the little blue circle with the rocket ship or the magnifying glass is withheld from the spine. This book, the argument goes, has been wifely praised by mainstream critics, adopted for discussion by book clubs, chosen by the Today show. Hence it cannot be science fiction."  -- Michael Chabon, p. 21 "Trickster in a Suit of Lights: Thoughts on the modern short story" from Maps and Legends.

I can't count the number of times I thought of Chabon's words on genre fiction while reading Glass Books. This book should be in the science-fiction/fantasy section of your local Borders or Chapters, but it likely isn't. Borders has it listed as "historical fiction", which is odd, as it's not terribly historical. In fact, aside from cursory references to European locales, there aren't any historical references. None of the standard steampunk history faves have walk-on parts: no Tesla, Edison, or Babbage.

This book is also an unabashed adventure story, complete with contrived coincidences, close escapes, and abundant cliffhangers. The three heroes are standard neo-Victorian types: the jilted Miss Temple, a mix of elegant manners and boudoir curiosity, utterly at home in the nineteenth century when it comes to tea and fashion, but anachronistic in her post-suffragette tendencies; the mysterious Cardinal Chang, the chivalrous assassin-thief; and the endearing Doctor Svenson, reluctant hero, and awkward academic. These three oppose a mysterious Illuminati-like cabal in battle of good vs. evil lacking any postmodern sympathies for the villains. 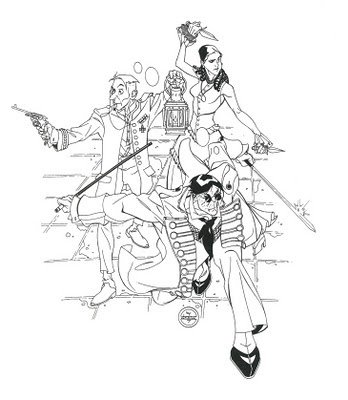 The heroes of Glass Books as rendered by Drew Johnson
The villains, in good steampunk fashion, are employing an infernal device of alchemical technofantasy: books made from a strange blue crystal, imprinted with people's memories. These books seem at first but a steampunk version of pornography until the true motive of the cabal is revealed. This is one of Glass Books' great strengths: reading steampunk book after steampunk book, one begins to think they know what to expect. The sensuality and eroticism of Glass Books caught me a bit off guard, but seems very appropriate, given what we know about nineteenth century double-standards regarding sex -- keep your kink behind closed doors, and all is well. The kink is definitely present in Glass Books, and should be of interest to the same type of steampunks who attended the sessions on proper bondage techniques at Steam Powered.

So it's not historical, it's kinky, and it's high adventure technofantasy. Then what the hell is it doing in the regular fiction section? One wonders the same thing while reading Thomas Pynchon's Against the Day or Mark Frost's The List of 7.

In short, it's because, like Chabon and Pynchon, Dahlquist writes very well. That isn't to say you'll like his pacing, or characterization, or the books themselves. That's simply too subjective. But for a story about derring-do, it's very well written. People often misunderstand me when I say this. I'll tell steampunks I think the Difference Engine is beautifully written, but that I thought it a bit tedious. For many people, good writing means enjoyable writing. Twilight is ostensibly very enjoyable, but it's awful writing. I'm enjoying the self-published Chenda and the Airship Brofman for its characters, but I can't say I think it's well-written.

It's the level of prose I'm talking about here. Dahlquist's conceit is ridiculous, a mix of  Machiavellian conspiracies with Sadean mad science and Dumas-like adventure, written so well that you're unaware of how silly it all is until one of the characters escapes yet another cliffhanger moment. And even once you become aware of how silly it all is, you just smile and keep reading, because it's simply too delicious to put down.

Perhaps that's the reason I can't post about the details. I'm simply too biased about what may very well be only a guilty pleasure. But if you're looking for some steampunk masquerading as serious fiction to read while you're hanging around your serious literary friends, then Glass Books of the Dream Eaters are for you. The covers even have those elegant serif typefaces. 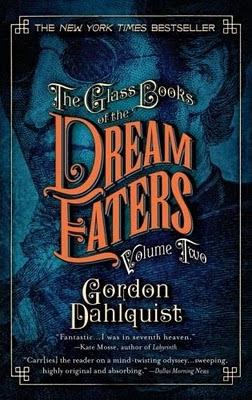