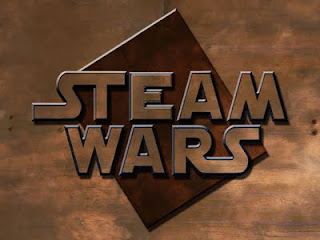 I'm still waiting to find out whether or not Neo-Victorian Studies wants my Steam Wars article for its special issue on steampunk, but I thought that I'd post one of the "deleted scenes" from the original draft here. In streamlining the argument, the establishment of space opera as related influence/precedent to steampunk didn't seem as important. It still strikes me as a good bit of information, and I thought it would make a nice post while I'm writing for publication this week. It's also timely, given the increased visibility the original images have been given by cosplay artists Outland Armour. Here's the excerpt:

John Brownlee, commenting on Marcel E. Mercado’s steampunk Star Wars art, stated that “[m]ore than any other science-fiction film, Star Wars feels like it was meant to take place in a steampunk universe” (blog.wired.com). Before moving onto a close reading of individual artworks to disseminate the steampunk aesthetic, we will expand upon Brownlee’s statement by investigating why Star Wars, more than any other science fiction (or pop culture) narrative has been subjected to steampunk’s retrofitting.

Star Wars is widely, arguably incontestably, labeled as space opera (Pringle 40; Monk 298; Hardesty 121), a subgenre of science fiction with strong ties to steampunk’s roots in nineteenth century adventure literature. Pringle draws a line between “scenes of warfare in space” and the “Victorian future-war [stories]” such as Garrett P. Serviss’s newspaper serial Edison's Conquest of Mars, which supposed a counterattack to the Martian invasion of Wells’s War of the Worlds. Pringle references Clute’s coinage of “Edisonades,” or stories “which glorified the careers of Edison and other hero-inventors in futuristic terms”, which draws another line between steampunk and space opera. E.E. Smith’s The Skylark of Space, commonly held to be held to be the first space opera, is effectively an Edisonade for the novel’s first half (40-41). Jess Nevins, annotator of fantastic Victoriana, has demonstrated the literary connection between the Edisonade and Steampunk writings.Monk cites Verne and Wells, the godfathers of steampunk as progenitors of space opera (300).

Steampunk is ostensibly lacking in the “cosmic vision” of the space opera, wherein travel occurs “between planets”, granting it an awe-inspiring, “interplanetary, interstellar or even intergalactic” scale (Pringle 41). However, this ignores the nineteenth century perception that “the train, the steamship, the telegraph, the typewriter, the linotype, and the gramophone, together with the myriad other technical marvels of the age” had served to “annihilate space and time” (Keep 138). To travel to unexplored continents amounted to virtually the same fantastic concept as traveling to another planet or galaxy. One needs only to consider the goal of one of the earliest objects of space travel: the moon via ballistic projectile in Verne’s From the Earth to the Moon to understand how different conceptualizations of vast distance have become between the nineteenth and twenty-first centuries (Chatelain and Slusser 26). And this is to say nothing of the underwater voyages in machines such as Verne’s Nautilus or temporal voyages such as that of the Time Traveler in Wells’s The Time Machine. Compare Professor Arronax’s astonishment at the viewing windows aboard the Nautilus with Pringle’s example of the view of the Trifid Nebula in Hamilton’s The Star of Life (42) to see how the events are only different given the scale of the physical settings: in steampunk, it's confined to terrestrial worlds; in space opera, multiple worlds.

Beyond issues of origin, steampunk and space opera also share the difficulty of definition. Both are pastiches, combining disparate elements. Pringle’s attempt at definition for space opera is cast in a cooking metaphor:


“So we begin to arrive at a recipe. Put together the following ingredients: a pinch of serious, which is to say utopian, interplanetary sf; a large dollop of planetary romance; an equally large dollop of the future-war tale, or Edisonade; and a bucketful of salty sea yarn; and voila, you have the makings of space opera” (41).

Monk abandons the project of definition altogether, in favor of understanding space opera in terms of its attitude:


“The effective way to proceed with a discussion of space opera is to abandon definition on the grounds that space opera is not susceptible of definition, being neither static nor monolithic. It is not a collection of texts but an attitudinal bias, and its literary expression reveals an authorial mindset which sees the extraterrestrial universe in holistic terms as both knowable and manageable, just as the writers of the models from which it derives had seen the terrestrial world. The space opera bias is betrayed by the monomythic romance mode, action-adventure plot, emphatic closure, optimism, social naïveté, mimeticism (in Frye's sense of the term), mix of entertainment and instruction, maximal encoding, fudge factors, minimal proleptic continuity, conflict (human/human or alien/human) in both stories and subsequently novels” (300).

Star Wars is not the only major science fiction franchise to have been steampunked in recent years. Images of Gene Roddenberry’s original Star Trek cast have been composited with antique photographs by digital artist Rabbittooth (rabbittooth.com), but a comparison of web searches for steampunk Star Wars vs. steampunk Star Trek demonstrates the superior popularity of the former. Again, even within popular space opera, Star Wars seems to be uniquely suited to a steampunk aesthetic.

This is because, as one blogger has commented, “Star Wars is already about anachronistic technology”, citing the presence of the lightsaber battles as swordfights, space battles as dogfights and how Chewbacca’s bowcaster resembles a crossbow (Llamas and My Stegosaurus). Star Wars is, like steampunk, invested with a nostalgia that “does not portray a real past but rather evokes a sense of cultural past” (Wetmore 7). As Steffen Hantke has noted concerning the neo-Victorian setting of the majority of steampunk, and the visual aesthetic of all the steampunk Star Wars revisionings, “Victorianism, what little there is of it in the conventional sense, appears not as a historical given but as a textual construct open to manipulation and modification” (248).

Chatelain, Daniele and George Slusser. "Flying to the Moon in French and American Science Fiction." In Westfahl, 25-33.

Monk, Patricia. "Not Just 'Cosmic Skullduggery': A Partial Reconsideration of Space Opera." Extrapolation: A Journal of Science Fiction and Fantasy. 33.4 (1992): 295-316.