I know I had Howl's Moving Castle scheduled for today's post, but I'm in the office at Grant MacEwan today, where I still share space with other people - playing a video would have been distracting, so I went with my promised post for tomorrow, which only required a book: something so ubiquitous in an English wing as to be invisible. 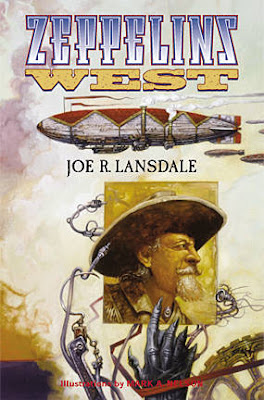 As I stated in my recent post on defining steampunk as an aesthetic, I knew I'd be referencing that definition of "Technofantasy in a neo-Victorian Retrofuture" in my ongoing posts. Looking at the cover of Zeppelins West, one might ask "what's neo-Victorian about that?" While we've got an airship, a common steampunk icon, we also have Buffalo Bill Cody, a legend of the Wild West, not Victorian London.

While steampunk in openly embracing the Old West in its aesthetic, it's been part of steampunk literature since Rudy Rucker wrote The Hollow Earth in 1990. Rucker was using the frontier of Mark Twain's Huck Finn, not Billy the Kid, but his book is set in nineteenth century America nonetheless. The notion that the steampunk aesthetic was unilaterally based in London or the British Empire up until recently is incorrect, especially when one includes (as I do) the television series Wild, Wild West as a steampunk precedent. Zeppelins West was published in 2001, only a few years after the film version of Wild, Wild West was released, but don't conflate them. Zeppelins West was published by Subterranean Press in their standard limited printing run. Subterranean is responsible for releasing some of the best steampunk books out there, including the Nebula award-winning The Women of Nell Gwynne's by Kage Baker. So publishing Zeppelins West was really just "business as usual" for the folks at SP. I highly recommend ordering something from them, as it will remind you what a book is like when, instead of pandering to current trends, a publishing house releases something because it thinks it kicks ass.

Zeppelins West is a great example of this. I've never read anything like it. Honestly. Coming up with a precis of this book is as challenging as defining steampunk. In the first 35 pages, we've been introduced to Annie Oakley, Sitting Bull, Wild Bill Hickock, all traveling in Buffalo Bill Cody's Wild West Show to Japan by airship. But the airship is only scratching the surface of Lansdale's anachronistic deviations (and deviances): Buffalo Bill isn't half the man he was in history, he's perhaps 1/8: he's been reduced to a head in a Mason jar filled with pig urine. The jar can be affixed to the top of a steam man, designed by (who else?) Frank Reade, who often invents in steampunk what he only wrote about in real life (see Paul Guinan and Anina Bennett's Boilerplate for another instance of this). We have learned that the Japanese discovered Western America, and that samurai fought with Custer at the battle of Little Bighorn. It is implied that Jules Verne desgined a communications satellite. And, if all this weren't enough, Sokaku Takeda, the "soon to be ruler of Japan", is slowly cutting off slices of the captive Frankenstein's monster, to consume them. I'd tell you what he's consuming them for, but I don't want to spoil the naughty fun.

You might think to yourself, "I love off-the-wall writing like that!" and hurry to order yourself a copy. Stop for a moment before you do, because if you don't like your batshit crazy novels to include the craziest sex you've seen in fiction since John Varley, cannibalism, and off-colour humour on every other page, then you might want to overlook Zeppelins West. I'm an academic, so I have to read it even when it might make me cringe. Lansdale doesn't make me cringe, but I thought a warning was necessary, as I know some of you take my writing to be recommendation, which it isn't always. I loved the book, but if ever there were a moment to say, "it's not for everyone," this is it.

Warnings aside, I think Zeppelins West is one of the best examples of what steampunk could be. It's the sort of book written without any consideration for a subculture, political correctness (although that isn't to say that Lansdale doesn't treat his subjects fairly - Lansdale is like The Simpsons: nothing is sacred, so he's equal opportunity with his lampooning), or marketability. It's a perfect example of "gonzo" writing, which is one of the words K.W. Jeter used to explain what he, Powers, and Blaylock were up to with what he dubbed "steampunk." In addition to everything in those first 35 pages, Lansdale takes the reader on a literary who's who, a League of Extraordinary Gentlemen for the Coen Brothers to direct (I'd have said Tim Burton, but his films are generally sexless - you need someone who won't flinch from flesh here): before the book is done, he'll have borrowed characters and plot devices from Verne's 20,000 Leagues Under the Sea, H.G. Wells' Island of Doctor Moreau, Bram Stoker's Dracula, and Frank L. Baum's Wizard of Oz.

The following quote should give you a taste (all pun intended) of how crazy this book gets: it takes place right after the beast men of Doctor Momo have decided they are free to eat anything and anybody they want, with the exception of the Goat Man, who says "I'm sticking with vegetables."


They howled at the great big moon. They danced on the beach. They made love to each other. They drank spoiled fruit juice. They had a big time.
Of course, the next morning they were mighty sick, two of the creatures had bleeding asses, and the Lion Man, high on fruit juice, had eaten one of the goats. (137-38)

I'm sure there are some who would exclude Zeppelins West from steampunk on the basis of how crude it is, forgetting that "gonzo" is part of what gave steampunk some "punk." The writers were far more playful, far less serious than some of our current steampunk writers. Lansdale isn't interested in history so much as histrionics, and the result is far more interesting than other books with zeppelins on the cover, such as George Mann's The Affinity Bridge. While I decried Jonathan Green's writing chops, I can still applaud how over-the-top his story ideas are. I think a lot of recent steampunk is trying too hard to explain the goggles and the airships. This isn't hard SF. As evidenced by my "technofantasy" label, steampunk doesn't often explain itself. Lansdale doesn't spend any time explaining why the Frankenstein monster or the Tin Man can be alive. They're both automatons of sorts, and in Lansdale's mind, that adds up to a good reason to get them in bed together.

I'm not advocating for all steampunk to be this bizarre. I like how serious Theodore Judson is in Fitzpatrick's War. But those who are writing "ripping yarns" should check out Lansdale, the first act of The League of Heroes, or any steampunk by Blaylock for a sense of how to incorporate some "gonzo" into their steampunk. In all the seriousness surrounding certain steampunk debates, let's not forget that steampunk is often about whimsy, and not take ourselves too seriously.

Zeppelins West is a tough book to track down. You're likely going to be ordering it from Ebay or Amazon.com's used option. You'll likely also pay more than $30 for it, but if anything I've said here has piqued your interest, it's worth your while. With the renewed interest in steampunked wild west though, it's not suprising that Tachyon Publications will be releasing Zeppelins West and its sequel Flaming London in a collected edition, aptly titled Flaming Zeppelins.
Email Post
Labels: Airships Gonzo Joe. R. Lansdale Novels recursive fantasy Whimsy Wild West