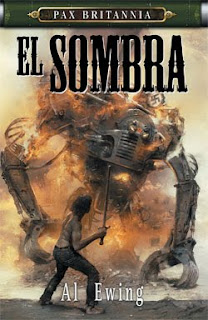 With Abaddon Books about to release Al Ewing's Gods of Manhattan, the sequel to El Sombra, I figured it was high time I wrote something about the first book.

I read El Sombra while on vacation in the Okanagan Valley last summer. It's the second book in the Pax Britannia series, which appears to be Jonathan Green's brainchild. Those who are familiar with my assessment of the first book in the Pax Britannia series will know I have little good to say about it. I read it while on that same vacation, and put it down in exasperation. Because El Sombra was written by a different writer, I decided to give it a chance. From the opening lines I was hooked. At risk of some copyright infringement, I'd like to quote it in its entirety:


The man walked across the desert.
And the desert destroyed the man.
The sun was a dragon that breathed fire on his neck and his back. Each grain of sand beneath his feet was a branding iron. He wanted to cry, but the desert had stolen his tears. Instead, his eyes wept blood.
In his left hand, he clutched a sash of silk, red stained black with spattered gore. His right hand gripped a sword. The knuckles on both hands were white and straining, almost bulging through the burned skin. He couldn't have opened his hands if he'd wanted to. But he didn't want to.
All the man wanted to do was die.
The wedding had been three days before. (5)

Now, some of you may be thinking, "but it's so pulpy!" And you'd be right. But it's good pulp, unlike Unnatural History, which began with the line, "The jangling of the doorbell rang through the echoing space of the entrance hall" (5), and then proceeded to describe said doorbell ringing, rebounding, and reverberating through a massive house. Nothing wrong with it per se...but by comparison?

El Sombra is pulp, and it makes good on the promise made by the gorgeous covers of the Pax Britannia books - you are about to read some high-adventure, and it will be grand. Unnatural History was high-adventure, but its writing was so low-brow that it obfuscated my enjoyment. El Sombra, on the other hand, makes no literary pretensions, but is a far better-crafted narrative. Jonathan Green's writing is like the steampunk equivalent of a charming-but-sleazy car salesman - his hero, Ulysses Quicksilver ogles women and sees them as trophies, and he achieves success without serious harm in the way of Roger Moore's take on James Bond. To carry the Bond metaphor another step, Al Ewing's writing is more like Daniel Craig's James Bond - brutal, intense, and gripping.

As I've already implied, El Sombra is a book you can judge by its cover, which features a barefoot, shirtless man with disheveled shoulder-length hair squaring off against a huge, clanking automaton with nothing but a sword in his hand. If you look very closely, you'll notice the swastika on the automaton's shoulder...because this shirtless sword-weilding hero is battling Nazis, the darlings of people-seeking-villains-no-one-will-complain-about-in-a-political-sense. In the universe of Pax Britannia, not only has the glory of the Victorian Empire lasted into the 1990s, but so has the monstrosity of the Third Reich: ridiculous as this is, requiring no small amount of suspended disbelief, Al Ewing plays admirably with the idea. This is not a deep book - there are no Big Ideas within its pages - it is an homage to pulp-fiction. It is a mashup up Zorro, Batman, V for Vendetta, and WWII adventures from the days before Tarantino problematized hating Germans with swastikas on their uniforms unilaterally.

That's El Sombra in a nutshell - evil Nazis vs. shirtless sword guy. The steampunk elements are mainly on the Nazi end of things: they have steam jet-packs and the aforementioned automaton, Der Zinnsoldat, which is described by its smell, with the same sort of pulp-poetic-prose the book opens with:
Blood and steam and the smoke of the terrible automated processing factories that clanked and belched human fat into the sky in the heart of the Fatherland. The conveyor-belt monstrosities that carried corpses to the fire--the dead bodies of 'them', the 'others', the different ones with the skin, their faith, their love that could not be allowed. (163)
Al Ewing also provides a very positive Catholic priest as the hero's mentor and aide, which makes for some good moments of philosophy over what will really bring about change, violence, or passive resistance such as the secret school members of the oppressed Mexican community engage in? There are genuinely touching moments in the spaces where Ewing's hero nearly fails to rescue a child because he's hell-bent on revenge.

However, due to its comic-book/pulp roots, the conclusion of the book is that it may be a good idea to instill hope by educating children for the future, it's effing necessary to stomp Nazis first. Ewing is not only a poet of pulp, but a poet of beating-to-a-pulp. Deaths don't just happen in El Sombra - they are related to us in gore-splattered detail. Ewing knows what he's writing, and goes so far as to insert a self-reflexive moment when El Sombra is about to be tortured, and the evil doctor, Master Minus ruminates, "If this was a scene from a pulp novelette, doubtless I would be cast in the role of the villain" (228).

There's also a love-story, a Rupenzel-esque girl-in-the-tower who acts as El Sombra's damsel-in-distress for the climactic battle. There's no great strides for gender representation here, but at least it isn't the straight up misogyny of Green's Ulysses Quicksilver. El Sombra is a subtler hero in his sexuality, and the ending is anything but cliche for an action hero, unless you catch the numerous nods to Clint Eastwood's man-with-no-name, who was never much for getting the girl either. While I doubt it's going to appeal to the most excellent Katie Casey or Jha Goh based on its rather typical treatment of its female character, those looking for a blood-soaked, action-packed page-turner can do a lot worse than El Sombra. For those who want to check their brain at the door and see some furious ass-kicking rendered with some really good writing, check out Al Ewing. He's got the goods.