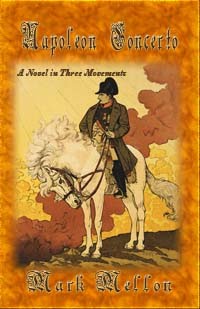 I've become gun-shy about reading small press and self-published works, because I generally find them so awful as to be unreadable. Because of this, I put off reading Napoleon Concerto by Mark Mellon for several months. While it's not a perfect read, it's very good, and I found myself frustrated by how little time I had allotted to spend in Mellon's alternate Napoleonic war.

In his review of Napoleon Concerto in issue seven of Exhibition Hall, Christopher Garcia describes Mellon's book as "military and detailed," but notes with a hint of surprise in his tone that he kept on reading, propelled forward by the intrigue and action. I'd concur fully - while I wasn't as off-put by the naval jargon and sometimes dense prose, I was surprised to find myself thoroughly engaged with the characters, and interested in what all good page-turners should interest their readers in: what happens next? This didn't happen immediately, and if there's a fault with Napoleon Concerto on the whole, it's that Mellon didn't focus his attention on O'Sheridane, an Irishman bent on revenge against the British Empire (this is the first of several items one could find to bring Napoleon Concerto into conversation with Verne's 20,000 Leagues Under the Sea). Instead, Mellon begins with Fulton, moves to O'Sheridane, and then ends with Napoleon as focalizers for each of the three movements of the book. This might have worked, except that Mellon invests so much in O'Sheridane that the final movement falls flat. I'd almost recommend not bothering with the final movement of Napoleon Concerto, because the first two movements are so satisfying.

This is the key difference between steampunk and alternate history: alternate history posits a moment of change in history, but does not abandon the laws of the physical universe in the process. I am of the opinion that despite being perceived as a seminal work of steampunk, The Difference Engine should not be categorized as steampunk. I'm in agreement with the assessment made in Locus in May 1991: “The Difference Engine is not steampunk, because it is a work of hard sf” (Qtd. in Prucher 221). Jay Clayton explains this further: “[a]ll of the information technologies portrayed by Gibson and Sterling existed in some form or other during the reign of Queen Victoria” citing the progression of Charles Babbage’s work on the actual Difference Engine, and his later designs for the Analytical Engine, “which is the true ancestor of today’s computer” (110-111). While Difference and Analytical Engines make frequent appearances in steampunk fiction—sometimes under a different name, such as Turing device or machine, in reference to mathematician and computer scientist Alan Turing—they are rarely given the sense of verisimilitude Gibson and Sterling imbue their Difference Engine with. This verisimilitude is less the result of any intricate explanation of the Difference Engine’s workings, but rather the attention the authors pay to the likely outcomes the advent of the computer one hundred years early might have visited upon Victorian London. The majority of steampunk is not as concerned with such retroactive speculations, but rather with telling a “ripping good yarn”, a phrase that could be pulled from the jacket-blurbs of any number of steampunk novels. What Sterling and Gibson did was to create a strong work of alternate history, wherein “anachronism, in the literal sense of something out of its proper time” is raised to a “methodological principle” (Clayton 113). But something is not anachronistic in the universe it belongs in, and more often, steampunk does not posit a moment of the break in history, but rather a whole new world with its own set of physical laws, cosmology, and occasionally species as well. Gail Carriger’s Soulless posits an alternate world, not alternate history, imagining a reality where vampires and werewolves exist. Accordingly, it cannot be alternate history: there was never an actual historical moment when the British Empire told vampires and werewolves they could not attain citizenship. Ergo, a world where Britain granted citizenship to imaginary creatures is not a divergence of historical fact, but a work of fantasy:

This difference between alternate history and the alternate worlds of steampunk may seem minimal, but I contend, as the EF does, that it is “crucial”:


If a story presents the alteration of some specific event as a premise from which to argue a new version of history … then that story is likely to be sf. If, however, a story presents a different version of the history of Earth without arguing the difference—favorite differences include the significant, history-changing presence of magic, or of actively participating gods, or of Atlantis or other lost lands, or of crosshatches with otherworlds—then that story is likely to be fantasy. (Clute “Alternate Worlds” 21)

The same is true for Mellon's Napoleon Concerto. Having Robert Fulton design a steam-powered vessel that could threaten the British Navy is not quite the flight of fancy that imagining a Whitechapel with metal that grows like trees, as in S.M. Peters's Whitechapel Gods. Steampunk works with technofantasy, and as a result is most often taking place in an alternate world, not history. Jay Lake's world of Mainspring with its massive Equatorial Wall, a clear indication of God-as-clockmaker, is not a divergence in history like having Hitler win WWII. It's not even on the same playing field as the alien invasion during WWII in Harry Turtledove's novels - we've accepted alien species as a trope of SF that, when done well, doesn't abandon scientific theory in its conceit. It's the idea that the world was created in a totally different fashion. This is divergence at a level of metaphysics. Again, this is not an alternate history, it's an alternate world.

There are examples of steampunk which utilize alternate history: Boneshaker doesn't disregard physical science in the way that Ian MacLeod's The Light Ages does. However, you're still dealing with zombies and airship pirates, and those are part of the offbeat, "gonzo" aspect of steampunk that separates it from other approaches to history. Napoleon Concerto is unarguably alternate history, without a shred of gonzo Victoriana in sight. It sits closer on the bookshelf next to Master and Commander, not His Majesty's Dragon.

I'm sure I'm going to get it with cannons blazing from those who still think steampunk is straight up SF, just done Victorian style. I'm too pedantic, too academic, yet again (please note the title of the blog, folks). My agenda is the same as Gary K. Wolfe's concerning the nomenclature of science fiction in general: “if the field is ever to establish a coherent critical vocabulary, scholars, fans, and writers each need to know what the others are talking about” (13). Not all fiction set in the nineteenth century is steampunk. Not all fiction set in an alternate history evoking the nineteenth century is steampunk. Napoleon Concerto isn't steampunk, but it's highly satisfying alternate history imagining Napoleon getting the upper hand with a series of steamships invented by Robert Fulton, who ostensibly could have invented such machines.

I end with a quote from Larry the Cucumber of Veggie Tales: