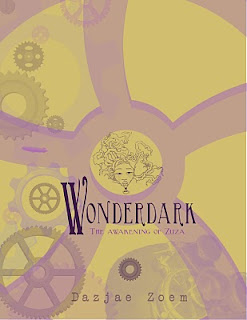 Between my last post on Mark Mellon's Napoleon Concerto and today's on Dazjae Zoem's Wonderdark: The Awakening of Zuza, my faith in self-publishing and small press publishing has been restored. Like Napoleon Concerto though, I am again posting on a book I would not classify as steampunk. Zoem doesn't even consider it steampunk, if the "YA Fantasy with Faery/Steampunk elements" description on page 4 is hers. That said, this book should be of interest to people interested in the intersection of steampunk and race, and is a laudable effort from Zoem.

I can say without reservation that I've never read anything quite like Wonderdark. Zoem's poetic prose is delightful to read, with a twenty-first century writer's rejection of standard structure: Wonderdark is a mix of first-person narrative, narratives within the narrative (bedtime stories both linear and non-linear, with a tip-of-the-hat to the once-popular Choose Your Own Adventure books), recipes, and dream visions. In truth, the whole book has a sort of oneiric quality, which is appropriate given its theme of awakening.

The steampunk element is interesting, and echoes some unpublished writers' aspirations to write about "real-life" steampunk, as it is expressed in fashion, lifestyle, etc. This is a minor aspect of the book, and isn't related to its themes, though it certainly could have been, and had it been treated as steampunk 'scapes in Whitechapel Gods, would have contrasted starkly with the uber-green/eco-friendly/Vegan space of Loomcity. The theme of awakening is combined with a number of Zoem's self-admitted real-world interests, such as Vegan food, eco-justice, and energy healing/work. Zoem takes the path of a magical system tied strongly to a real-world practice, which reminded me at times of reading certain Evangelical Christian books back in the 80s and 90s, or James Redfield's Celestine Prophecy. Thankfully, Zoem isn't as didactic as say either of those examples, or worse yet, Ayn Rand, and accordingly rescues her art through having an engaging narrative. Zuza's a great protagonist, albeit socially overconfident for an ostensible bookworm. Her coming-of-age interactions with both her birth mother and step mother are great contrasting relationships, and despite expecting the fantastic, I was more interested in the mundane aspects of the book, such as the moments when Zuza babysits her younger stepsister, Kat.

There's not much I can say about Wonderdark that relates to my current research. Interestingly, it was more evocative of the books I read by Holly Black, like Tithe: A Modern Faerie Tale, or Francesca Lia Block's Weetzie Bat series, except that unlike F. Lia Block, Zoem has a parents' propensity for valourizing moral behaviour - Zuza doesn't jump into bed with strange boys, doesn't get involved in drugs, all activities which Weetzie Bat engages in without a moment's thought or hesitation. While I'm not in favor of censoring teen reading, I'd be far happier to see my daughter reading Wonderdark than Weetzie Bat. But I digress. What I'm trying to say is that, in agreement with Jha Goh, I see Wonderdark as belonging to that class of books labeled young adult urban fantasy. In that respect, it's quite good, although not to my own tastes. This is owing more to the fact that I'm in my late 30s, not my teens: further, I'm male, and Wonderdark is definitely geared toward girls, though I wouldn't rule out boys enjoying it.

Beyond the narrative, Zoem includes a number of enjoyable appendices called "Zuza's Hivemind Archives," my favorites being the Vintage RPG (which likely isn't what many of you would expect, but will be of huge interest to those who "thrift" their steampunk), and "The Zizeru Companion: Fine Selections of Greenbone Cuisine," which is a Faery cookbook. Given that "most humans won't have access to Moodpetals" or other faery ingredients, the Zizeru Companion is good enough to suggest alternate ingredients. If there'd been a hobbit cuisine appendix to Lord of the Rings, you can bet I'd have been in the kitchen many years earlier.

So while it isn't steampunk, Wonderdark is well worth a look for anyone who enjoys YA urban fantasy, and has at least an appreciation for the issues Zoem addresses. Most of my red-neck meat-eating neighbours would find Zoem's regular highlighting of Vegan lifestyle offensive, since they share affinities with Zuza's wicked stepmother. I'd also recommend this book for middle-school educators looking for some hip, interesting fiction that's off the beaten path, or who seek fantasy with protagonists who aren't WASP wizard orphans. If nothing else, you'll have some interesting food for a class party, or a list of cool musicians like Brig Feltus to listen to.