The Half-Made World by Felix Gilman 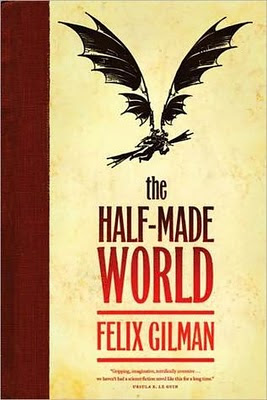 Here it is, Halloween, and I'm at the end of an exhausting month. The pumpkins are carved, the kids are picking out which costume to wear (yeah, they have that many), and I'm wishing my wife liked horror movies more, so we could watch one of the many I own tonight. I had originally hoped to tie in a review of Joe Lansdale's Flaming London with the anniversary of Orson Welles's radio broadcast/unintentional hoax of War of the Worlds, but I've learned my lesson this year: No more grandiose plans for the fall...OR...write all the blog posts in the summer, when I have nothing but time for reading and writing.

Nevetheless, I did get something done that has a Halloween bent to it: my review/reflection of Felix Gilman's The Half-Made World for Tor.com's "Steampunk Fortnight." It's all about Weird Westerns, Walt Whitman, and Emily Dickinson...


Demons and Deities in Felix Gilman’s The Half-Made World: A Review of Sorts, With Academic Shenanigans Throughout

Wikipedia gives an exceedingly expansive definition of the weird western as “any western blended with another genre.” This seems rather too expansive, as I don’t think anyone would classify Blazing Saddles or Brokeback Mountain as weird westerns, despite a blending of western with comedy and romance, respectively. I prefer a more stringent line of demarcation: Weird West is the western merged with the fantastic, either science fiction, fantasy, or horror, with a dark tone to it. When it treads into SF ground, it often utilizes a steampunk aesthetic. These are not necessarily interchangeable terms, though: not all steampunk set in America can be considered weird western: neither The Amazing Screw-on Head nor Boneshaker would be considered a western. Felix Gilman’s Half-Made World, on the other hand, is pure weird western, with a whole lot of steampunk thrown into the mix.

Half-Made World has got all the elements of the steampunk aesthetic. Technofantasy? How about the spiritual brother of Roland of Gilead, who doesn’t shoot with his eye, mind, or heart, but with a revolver housing a demon in addition to six bullets: “The weapon—the Gun—the temple of metal and wood and deadly powder that housed his master’s spirit—sat on the floor by the bed and throbbed with darkness.” (39) The Gun and its demon provide this gunslinger, Creedmoor, with Wolverine-like healing abilities, preternatural senses, and Matrix-fast, bullet-time reflexes. Without it, he is only an old man. With it, he is one of many Agents of the Gun, in the service of the spirits of the Gun. Gilman is unclear about the motivations behind the Gun’s machinations, keeping the cabal of spirits outside the frame of action in a “Lodge” that made me think immediately of Twin Peaks, the Black Lodge, and the strangeness therein. The opponents of the Gun are the Line, and they too have powerful spirits inhabiting technology, thirty-eight immortal Engines who are viewed as Gods by members of the Line.

Check out the whole article here.