"The Hole in Space" by James P. Blaylock 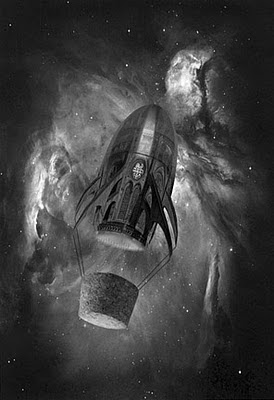 Whatever "The Ape Box Affair" lacked in technofantasy, this second short story in The Adventures from Langdon St. Ives makes up for. Blaylock admits Lewis's Space Trilogy as an influence on his work, and while I was reading "The Hole in Space," I couldn't help but think of what Lewis said about technology in science fiction: "I took a hero once to Mars in a space-ship, but when I knew better I had angels convey him to Venus." Blaylock takes the middle ground between those extremities, imagining the sort of solution to a blackhole an eight-year old boy might, especially the sort disposed toward plugging up dikes.
Blaylock has shared the story of the origin of “The Hole in Space” at public appearances, and records it in “Parenthetically Speaking,” at the end of The Adventures of Langdon St. Ives:


So there we were at O’Hara’s Pub, talking about something vital…K.W. [Jeter] tolled his eyes at something I’d said (something involving “science”) and suggested that given my curious notions of that subject I’d be likely to write a story in which someone plugged a black hole with a Fitzall Sizes cork. After a momentary silence I asked him whether, with all due respect, he was willing to let me have that idea or whether he wanted it for himself. He said I was welcome to it, and I went home and wrote “The Hole in Space”…” (469)

Here at the genesis of steampunk, as today, there isn't much interest in real physics or astronomy: this is Victorian science fiction, to be sure. Steampunk may have pulled away from these roots in the last decade, but Blaylock is clearly paying homage to the scientific romances from a century earlier.

The narrator of "The Hole in Space" is Jack Owlesby, the "boy downstairs" from toymaker Wilfred Keeble in "The Ape Box Affair," who is described as having been "mixed in with Langdon St. Ives himself some little time ago in another of St. Ives's scientific shenanigans" (14). While Owelsby was only one of many characters engaged in the pandemonium of "The Ape Box Affair," here he acts as first-person focalizer, in a voice that conveys anything but boyhood. I spent a bit of time wondering about timelines, and then remembered that Blaylock has all sorts of characters recur in his books without establishing any hard link between them. They're like characters in a David Lynch film, morphing in and out of roles, maintaining certain attributes despite arguably being entirely new characters. It's something I want to ask about when I interview Blaylock at Steamcon next week. For the time being, I'm assuming "The Hole in Space" is part of the Langdon St. Ives cycle of stories, but not to get too bogged down in trying to establish chronology.

Once again, as in "The Ape Box Affair," the frame narrative exhibits the traits of a secret history, something that you've heard only rumours about, but lack the whole story: "Virtually no one knows what actually occurred on that wild night"--but we're about to find out the truth.

The truth of "The Hole in Space" is nowhere near as slapstick as "The Ape Box Affair," though it still has its moments worthy of Buster Keaton. At one point, Owlesby is thrown bodily from a moving train by a pig-faced alien, and later returns a lit explosive, fuse still burning, back to his assailant, after ruminating that "there's something in a man that doesn't love a bomb ... And without a second though, I ... pitched it through the open the open door, out in to the meadow, where it rolled like a game of nine-pins down the hill toward the forest, gathering speed, bouncing and hopping toward the very place where the pig man had taken shelter" (37). 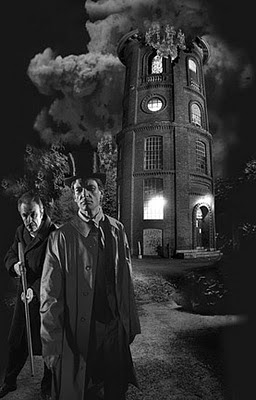 Professor Langdon St. Ives plays a more direct role in "The Hole in Space," as does his manservant, Hasbro, who is everything the film versions of Alfred Pennyworth have been to Bruce Wayne, and then some. When we first meet Hasbro, he is entering St. Ives's home from a heavy rain, carrying a "long smoking rifle of monstrous proportions" (33), having just dispatched one of the pig-faced aliens. Keeble makes an off-page appearance, having transformed from mere toymaker to an inventor of some merit.

St. Ives plays the role of leader-hero "on camera" this time, so to speak, having discerned that the alien threat are utilizing a black hole to drain our galaxy/universe of its essential energy. St. Ives plans to put a stopper in their plans quite literally, and before the tale is done, Hasbro, Owlesby, and the Professor will have journeyed into space aboard a vessel described as "a gothic assemblage of metal and glass" with the "appearance of a great ruddy bullet that had been decorated in the style of Chartes Cathedral." Blaylock remains a wonderful wrench in the great brass gears of those who decry modern steampunk as "not being serious enough." Apparently one of its ostensible originators wasn't taking it seriously either (it should be noted that although "The Hole in Space" has a 2002 copyright, it was originally written in 1977, shortly after "The Ape Box Affair," which is why it appears second in The Adventures of Langdon St. Ives). The technology here is far from the Hard SF John Campbell espoused: "There were gyros to ameliorate and fluxion sponges to douse," is how Owlesby relates the operations of St.Ives's spacecraft. When it's time to finally lift off, the Professor will jab buttons, and then heave on "a bloody great anti-something-or-other-crank with silver wires sprouting from it like tentacles" (40). Not much punk ideology here: if Blaylock has a political agenda, then the gag's on us - you'll know what I mean once you've read St. Ives's solution to sealing up a black hole.
Email Post
Labels: James Blaylock Short Stories Technofantasy Whimsy