Yeah, I know - I skipped the Ghost of Christmas Present. Let's pretend the Steampunk Santa wallpaper was my "present," and I'll steal the lame pun reference from Animaniacs doing A Christmas Carol and call it even!

Before I get into the bulk of this post, I wanted to present my "things to do before the five-year mission is over" list: 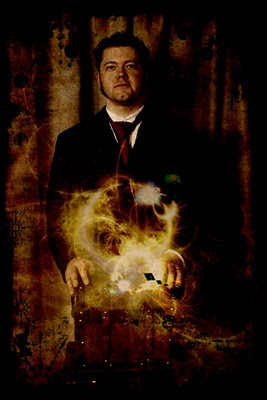 As I round the corner into the third year of my PhD work, I'm rather optimistic. With the writing the blog has generated combined with the articles published elsewhere, both in print and online, I've likely got the dissertation already written. It's just a matter of dropping it all into a Word document and organizing it, and then inserting a lot of major literary theorists into the mix. That's the work of May to August of 2011. I'm confident I'll have a first draft done and handed in by August.

My next immediate task is my prospectus, which is basically a paper saying how I'll be conducting my research, which is laughable, since I've been conducting said research for two years now. Part of these "ghost" entries here at the blog have been a sort of warm up for the prospectus. The papers I wrote from my visit to Rice in 2008 were me getting my feet wet: thank God for the serendipity of the "Steam Wars" paper, which really kick-started the concept of steampunk as aesthetic and not genre.

But beyond that first draft of the dissertation, the work will mostly be about colons and semi-colons, dangling participles, and shoring up arguments. I know what I want to say, and for the most part, have said it many times already. The structure of my dissertation won't surprise any regular readers:


1. Introduction to Steampunk: the difficulty of a definition
2. Seeking the aesthetic: an inventory of the novels and short stories utilized; theoretical approaches utilized
3. Aesthetic 1: Neo-Victorianism - how the aesthetic evokes the nineteenth century in a number of different places, worlds, and times, with examples.
4. Aesthetic 2: Retro-Futurism - how the aesthetic imagines what the nineteenth century past imagined the future would look like, with examples.
5. Aesthetic 3. Technofantasy - the inclusion of technology that is scientific in appearance only.
6. Case Study 1: Steam Wars - the aesthetic applied by others
7. Case Study 2: A steampunked Beowulf - the aesthetic applied by the author
8. Conclusion: A definition with broad application

That should do the trick, I figure. We'll see. It needs to be around 200 pages, but I'm pretty sure I have that already. Like I said, it's all about organization and revision now.

Beyond the completion of the dissertation, I see a horizon of writing - not the sort of stuff I write now, though that will continue. I'll get back to writing fiction again. I have a few people who've asked me to submit fiction to their publication/anthology/whatever, and I'm looking forward to the summer of 2012 when I can see myself doing that. If I'm right, this will officially turn out to be a four, not five-year mission. But we'll see.

In the meantime, I'll continue to attend one out-of-town con per year, write for Exhibition Hall, Journey Planet, and Tor.com, and do my best to keep the blog updated. Thanks to everyone who's helped me make the journey thus far. A few names to that end: