The Ghost of Christmas Past: Rice University - December 2008

Today is apparently "pretend to be a time traveler" day, and this is how I'm time traveling here at the blog, by going back to December of 2008. This should have been the first post I ever made, since it was during this Christmas visit to family in Texas that I started the Steampunk Scholar blog. I nearly posted about it a number of times in the past two years, but it never seemed that the time was quite right. With the recent release of the "Steam Wars" article in Neo-Victorian Studies, and a desire to have a holiday theme to the posts this month, it is, to use a Biblical reference, the fullness of time for this anecdote.

People often ask how I came to the decision to study steampunk for my PhD work. It started out of the confluence of two separate incidents. I wrote a paper on alternate history, which lead to finding Steffen Hantke's brilliant article, "Difference Engines and Other Infernal Devices: History According to Steampunk" in Extrapolation.  Around the same time, I'd drawn an image for a webcomic idea I'd had, and someone said something about it feeling steampunk. I'd heard of the term before, but had paid it little attention. When it came time to choose a topic for my dissertation, it was between Intertextuality of Dystopic literature in Nine Inch Nails' Year Zero, or something to do with steampunk, based out of the interest generated by the two unrelated incidents. My M.A. thesis advisor, who I have a great relationship with, said, "Dystopia's been done. You do steampunk, and I'll be your advisor again." I was sold.

That fall, while doing grant proposal research (you know, the research you do to tell someone what you're going to research), I came across an advertisement for Steam Powered, the North California steampunk convention. With what little I knew about steampunk, I was aware that with guests like Jake von Slatt, Abney Park, the Vandermeers, and Greg Broadmore, this was not an event to be missed. Tofa Borregaard, the programming coordinator for the event, put me on a few panels and let me present, all very last-minute. The event was incredible, and galvanized my research. 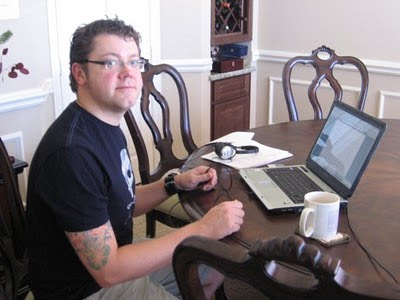 Two months later, I was still finishing up term papers while on vacation in Katy, TX. I had to put the finishing touches on a paper about Captain Nemo, and needed to write a theory paper from the ground up. My prof had been interested in me writing something about steampunk, so as to write toward my research. My brother-in-law wanted to have a Star Wars marathon over the holidays, and in the intersection between researching the paper and watching the films, the "Steam Wars" paper was born. 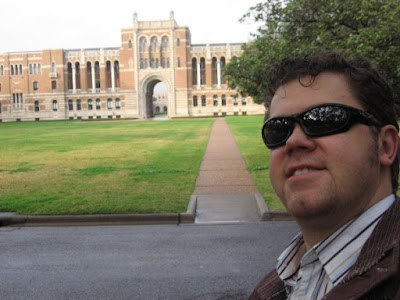 Writing papers on your holidays is always a chore, even when you love the subject matter. Yet despite missing out on a lot of fun moments, I have a very fond and vivid memory of a day spent in the library at Rice University in Houston. The campus was gorgeous, and as a great fan of architecture that supports learning, it energized my excitement. What I didn't know at the time was that Rice holds one of the best collections of vintage Verne editions in North America, which is probably just as well, as I'd have lost a day looking at those when I needed to be photocopying. 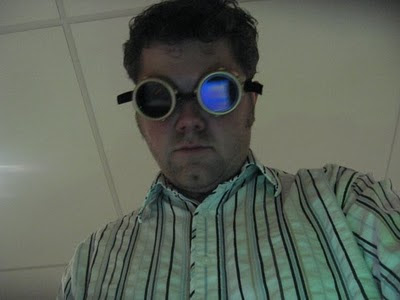 Since I couldn't take any books out of the library, I set to a vigorous regimen of locating my research, then taking it down to the photocopier where I spent a lot of money photocopying huge sections of books. I had my steampunk goggles along, as they travel wherever I do when I'm on steampunk scholar business, even when it isn't a con. In this case, it was a lucky thing: no joke, with the amount of photocopying I was doing with the top of the copier open, I put the goggles on to protect my vision. Plus, the photo ended up looking kind of cool. 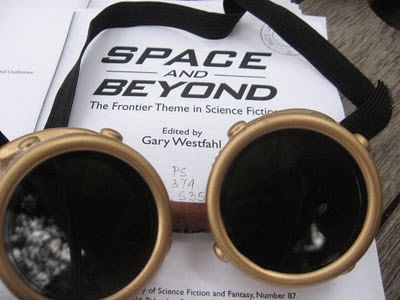 I had a moment where I paused in the day with a stack of my research in front of me, staring out one of the windows of the library. I pondered how I should go about writing my dissertation: what would be the best approach? I didn't create the blog until a few days later, but I'm positive that was the moment this website was born. I'd been thinking about how much fun it had been to attend Steam Powered and was wondering what the future would hold. The horizon was before me, as it were, and I was deciding on the best path to embark on. 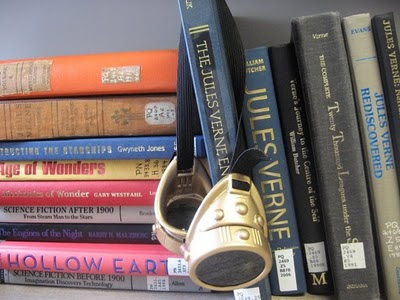 While I made the decision for steampunk in my hometown of Medicine Hat, Alberta, and the research most certainly got its start in California, the advent of this blog was at Rice University in Texas. I had no idea when I started the blog that the monthly readership would climb to 10,000 readers (well, just shy of it last month, but that's the round number!), that it would lead to being on several review lists (yes, they're coming in January!), a nomination for an Airship Award at Steamcon II, and best of all, so many good friends in the steampunk community all around the world. I just thought I'd start a blog, and some people might give me feedback. Talk about underestimation. 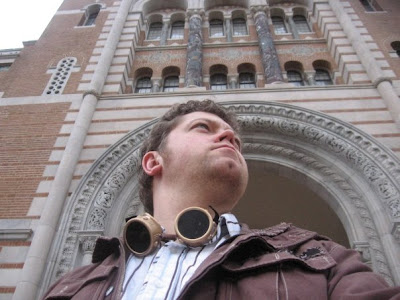 Post-scriptum: it occurred to me too late to have time for the revision, that I should have written this in the present tense: "I'm standing in front of Rice University..." It would have given the posting a better "time travel" feel, but I'm busy with marking and giving exams, so I have to be happy with publishing anything at this time of year!
Email Post
Labels: Steampunk Christmas The Mission