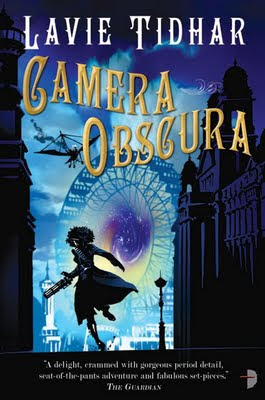 Lavie Tidhar’s Camera Obscura, out this week from Angry Robot, is dreadful: penny dreadful.
This steampunk novel both evokes the cheap, serialized sensational fiction of nineteenth century Britain, and engages the aesthetic of the comic book, grandchild of the penny dreadful. While it contains more literary references than any literature/creature mashups flooding the market these days, don’t go looking for high-brow literary illumination through this Camera’s lens: Tidhar writes in the manner Michael Chabon champions in “Trickster in a Suit of Lights,” applauding the speculative writers who keep one foot in the land of “literary” fiction, while invoking “the idea of playfulness, of mockery and inversion.” Tidhar is such a writer, delivering a rollicking adventure with passages of brilliant prose, all the while wryly winking at the reader. At its core, Camera Obscura is a little bit like a Dirty Harry movie, with a young Angela Bassett replacing Clint Eastwood, and 19th century Paris standing in for San Francisco. But that hardly encompasses the dizzying array of elements Tidhar weaves together in a maelstrom of pop culture and recursive fantasy.