Bustlepunk: the softer cousin of steampunk 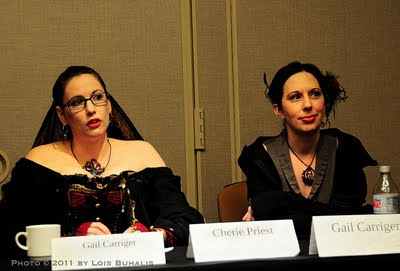 Gail Carriger and Cherie Priest at the Nova Albion Steampunk Exhibition
Photo by Lois Buhalis, used by permission
A few weeks back, Tor.com published an article called "The Bustlepunk Apocalypse Continues," in which writer Alyx Dellamonica defined the term Bustlepunk as "the softer cousin of steampunk." Bustlepunk was coined by writer M.K. Hobson back in '09, and while I'd heard the term before, I hadn't given it much thought. However, Dellamonica's article went on to conflate the writing of Gail Carriger and Cherie Priest with this soft cousin of steampunk, which bothered me (It should be noted that Alyx Dellamonica has retracted her use of Priest in relation to Bustlepunk - she readily admits she was simply quoting Hobson's Bustlepunk Manifesto).

Hobson's original coinage of the "Bustlepunk" was a clever marketing strategy. Bustlepunk has a nice ring to it, and for an author looking to carve out a niche in the larger pool of SFF, serves the purpose of creating a buzz. Nevertheless, words take on a life of their own, beyond authorial intent. My concern with Dellamonica's article is that it lumped Carriger and Priest into a 'soft' category, a space reserved for women in Science Fiction and Fantasy for decades, most famously with Ursula K. LeGuin's The Left Hand of Darkness. This isn't "real" science fiction, it's "soft" science fiction. My concern is shared by Deborah of  The Bookish Dame, who wrote in December of last year, "By singling ourselves out, we destroy the ideal that authors are all equal in their intelligence and capabilities to confir[sp] and express their imaginations and knowledge.  It's a battle women have fought for ages." Despite this critique, Deborah walks a gracious middle-path with Bustlepunk, excited by "a story written by a woman, about a woman, for a woman," but equally concerned at the ramifications of the potential for signifiers like Bustlepunk to mark women as "second best to the male author."

The outright pairing of Priest and Carriger as representative of anything other than the use of the steampunk aesthetic ignores the diversity demonstrated in their writing. None of Priest's steampunk to date features any romance. This omission of romance has angered some readers, some going so far as to perceive Priest's heroines as lesbians, simply because they don't find every man they meet (while escaping near death adventure)attractive. Priest writes hard-edged alternate history adventures with drug-crazed revenants who will chew your face off. In Clementine, one scene prominently features the removal of a bustle to accommodate firing a Gatling gun in an airship cockpit. Priest's heroines are best understood by Maria Isabella Boyd's request in that same scene: "Put me where I can make the most trouble." When Priest writes "soft," as in the moving opening chapters of Dreadnought, it's in stark contrast to the hard edges she utilizes later. It is a dynamic technique, not a uniform style.

Gail Carriger is often perceived as "soft:" in addition to being called Bustlepunk, her work has also been categorized as Mannerpunk, excluding her from unreservedly being considered steampunk. Again, this is why I've suggested the understanding of steampunk as aesthetic, not genre: it's a more inclusive approach. We don't get into arguments over whether a book is steampunk, but rather how much and what aspects of the aesthetic it utilizes. But I digress: Soulless and its sequels contain all the elements I've identified in numerous steampunk works. I don't think I need to argue the Neo-Victorian aspects of Carriger's work, but some may find the retrofuturism and technofantasy lacking. Carriger's retrofuturism is more often of the subtle, socio-political variety. Carriger has taken the New Woman mentioned in Stoker's Dracula, and realized it in Alexia Tarabotti in a way Mina Harker never achieves. Alexia is effectively a 21st century woman with a 19th century voice. Carriger's society of humans and supernaturals is predicated on a hierarchy of soul, and when you get into the particulars of those with an excess of soul, Carriger is seen to be making further social commentary on current issues surrounding marginalized groups. One need only read the conversation between Alexia and American scientist McDougall regarding his brother, who was hunted down by his Puritan family after becoming a vampire, to glean resonances with current discourse in North America concerning homosexuals: "I loved my older brother,you see? I saw him once after he'd changed. He was still the same person: stronger, paler, night born, yes, but essentially the same. He probably still would have voted conservative, if they'd let him vote" (141). Anyone who argues the absence of technofantasy in Carriger is either working with a narrow concept of steampunk technology, or hasn't read the books: from the clockwork golem VIXI to Lyall's glassicals, to parasol gadgetry, to airship highjinks: if Carriger isn't working with steampunk tech, then not even K.W. Jeter is. Further, her understanding of steampunk technology goes beyond industrial tech: her hierarchy of souls repeatedly references other sciences in bloom in the nineteenth century: spiritualism and medicine. In short, Carriger uses the steampunk aesthetic in spades, and doesn't need a sub-category to describe what she's doing. As for soft, where Priest has zombies chewing on necks, Carriger has a werewolf-transformation sequence explicitly describing a very gory neck-chewing at the end of Changeless that gives Stephen King a run for his money. Carriger can write the gross-out, the knock-down, and the thrilling chase as well as she writes the make-out, the knocked-up, and the romantic chase.

My concern is simply this: I don't want to see two of the premiere writers of the new wave of steampunk sidelined as anything other than masters of the aesthetic. While there are many who wouldn't see Bustlepunk or Mannerpunk as pejorative, there are many readers who will dismiss Carriger and Priest outright because they are women, and moreso if connections are drawn to a term like Bustlepunk. I have no issue with the term as something fun to further clarify a distinction within the larger classification of steampunk. But I do have issue with the blanket assumption that Priest and Carriger are involved in creating the "softer cousin of steampunk" just because they're women. Not all soft steampunk is written by women. For proof, try Matthew Flaming's The Kingdom of Ohio, a lovely story of love, loss, and nostalgia. Or as SF author J.M. Frey contests in this final word on the subject (at least so far as this post is concerned), ""Bustlepunk" has the potential to become pejorative, and without rigorous definitions of what makes Steampunk Steampunk, and makes Bustlepunk Bustlepunk (both of which are impossible as they are sliding definitions of an aesthetic that is still organically evolving), then there is the danger of separating the professional writing men from the little girls playing dress up."
Email Post
Labels: Cherie Priest Gail Carriger