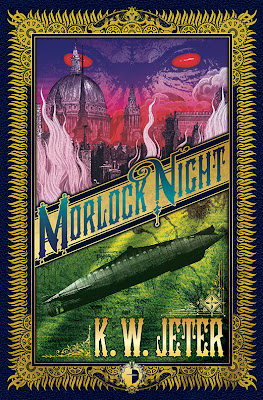 If you know anything about steampunk, you should know who K.W. Jeter is. He's the man who coined the label "steampunk" in a nigh-legendary letter to Locus magazine in 1987. While many have rightly noted that Jeter did not invent steampunk per se: he ironically (in every sense of the word) provided us with a term to describe those gonzo Victorian fantasies he and Californian writing mates Tim Powers and James Blaylock were creating. Arguably, Blaylock retains the distinction of having written the first of these tales among the California trio with "The Ape Box Affair," but steampunk scholars differ on who really wrote the first true steampunk work. Some would say Moorcock, writing Warlord of the Air across the Atlantic pond nearly a decade before Blaylock or Jeter. What is less ambiguous is Jeter being the man who first used the term steampunk, and so ostensibly coined the term.

Accordingly, newer readers of steampunk have a high bar of expectation when it comes to read K.W. Jeter's first steampunk work, Morlock Night (1979). They expect it to be a work derivative of cyberpunk in some way, since Jeter had written some cyberpunk. They mistakenly assume it to be serious and political like Moorcock. My most recent run-in with this flawed perception of seminal steampunk came at the Canadian National Steampunk Exhibition (CNSE) in Toronto, April 29-May1, when someone made the offhand comment that newer steampunk writing isn't as serious as the original works were. It wasn't the first time I've heard this statement, and it certainly wasn't the last. Following that session, Thadeus Tinker of UK steampunk fame and I had a chuckle at this, both citing Jeter's Morlock Night as a perfect example of how steampunk has always been a mix of the gravitas and levitas.

Readers of H.G. Wells' The Time Machine have further reason to raise the bar of expectation, since Morlock Night purported on the original cover, to explain "what happened when the Time Machine returned." Fans of Wells' serious social commentary are bound to be disappointed when they discover that Jeter's novel is pure page-turning fun. One of his characters self-reflexively warns the Wellsian faithful not to take things too seriously here: after all, it's only a story: "My good fellow, don't get so excited over a mere story! Divert yourself with whatever sequels you care to imagine, but save such passion for reality" (9). The conversation surrounding this statement should give the attentive reader the indication that this isn't Wells' agenda anymore -- this is going in a new direction.

Further, as Blaylock chronicles in "Parenthetically Speaking," his afterword to The Adventures of Langdon St. Ives, Morlock Night was written not only as a sequel to The Time Machine, but also as part of a series "that would involve the reincarnation of King Arthur throughout history" (469). Although the series was scrapped, Jeter found a home for Morlock Night with DAW paperbacks. In short, Morlock Night is a sequel to The Time Machine in story, but not in spirit, as well as a mashup with Arthurian legend.

I didn't know this when I first read Morlock Night last spring, and was accordingly surprised when Merlin himself walked into the story, when magic was used unabashedly, and ultimately, the goal was to save Christendom. I balanced this against forum discussion where I'd been told steampunk was intrinsically political, and likely of an anarchic stripe, because that's the way original steampunk literature was. And yet, here I was, reading original steampunk that shared greater affinities with C.S. Lewis' That Hideous Strength than anything by Moorcock. I've glibly stated that the psudeo-Judeo-Christian influences outweigh the secular political ones in early steampunk, though I have no interest in seeing any ideology conflated a priori with steampunk.

I wondered if Jeter wasn't trying to be ironic with Merlin's early speech about the call of adventure to the hero:


"King Arthur is reborn every generation in time to intercede against the direst threat facing the cherished Christian and human ideals that are embodied in England more than any other place. It's a commentary on humanity's penchant for mischief, inasmuch as there's always a threat to Christendom." (41)

But this is delivered with deadpan seriousness, despite the lead character's incredulity. There is even a moment near the end when it seems a more cynical conclusion will be delivered, when Excalibur hasn't manifested, but by the end of the book, all will have been set right in a fictional universe where there is right and wrong, without ambiguous shades of gray muddying the waters.

Angry Robot books has released a lovely new edition of Morlock Night in an omnibus with Jeter's other steampunk classic, Infernal Devices. As with the re-release of Joe Lansdale's steampunk works, this omnibus features cover art by John Coulthart, one for each story: Infernal Devices, arguably the superior work on the front, and, despite being chronologically first in publication date, Morlock Night on the back. What's fascinating about Coulthart's beautiful cover is that it continues to promulgate a horizon of expectation for Morlock Night as pure science fiction. There is no explicit indication of  the magical elements in the novel; one might construe the eyes as those of the evil Merdenne Ibrahim, nemesis to Merlin, but they could just as easily be Morlock eyes. While the Arthurian elements are crucial to the narrative, they are as absent on the re-release as they were in Josh Kirby's art for the DAW edition. While I love Coulthart's approach, I wish Kirby had still been alive to produce one of his crowded, overpopulated covers in the style he is famous for with Terry Pratchett's Discworld novels. It certainly would have indicated the tone of Morlock Night better: unlike many of Jeter's other books, Morlock Night does not contain dark themes: it is a romantic adventure story filled with nineteenth century tech and medieval magic. 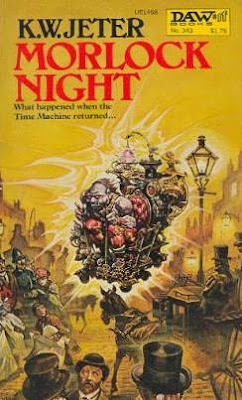 Yet I suspect that many steampunk fans will pick up Angry Robot's re-release, and finding Merlin lurking in the pages of Morlock Night, be as disappointed as several reviewers on Amazon have been. "Magic doesn't belong in my steampunk," they'll cry. "Where's all the industrial retrofuturistic tech?" And while there is some, there won't be enough to salve the presence of the Magician of all Magicians, nor of the goal of fighting for Christendom and Old Brittania. To scrub the filth of such ethnocentrism from their palate, they'll need to turn to something darker, grittier, and laced with political subtext. Yet ignoring Jeter's contribution to the steampunk canon (and yes, I'm going to use that contentious term, because steampunk reading lists have been including Jeter for years, while it was abundantly clear most of these list-makers have never read Morlock Night, being as it was out of print and expensive to track down before Angry Robot's re-release), is like excising The Anubis Gates on the grounds Powers himself says he doesn't really think it's steampunk.

Jeter coined the term steampunk as a tongue-in-cheek response to the an inquiry of what Blaylock was doing in his Langdon St. Ives short stories and novels, what Powers was doing in Anubis Gates, and what Jeter himself was doing in Morlock Night and Infernal Devices. Current steampunks might not like their steampunk featuring reincarnated Kings and immortal wizards, but a serious study of steampunk literature must include these seminal works.

My recommendation to those who have never had the fun of reading Morlock Night is to adjust their horizon of expectation accordingly. This is only Jeter's third novel. It was written effectively on spec for a series idea. Knowing it isn't going to deal with Wells' social issues helps. Knowing there will be magic ahead of time may assist in reading and enjoying it as well. The bottom line? Steampunk has always been about the application of the aesthetic to many different approaches involving different themes and ideologies. This isn't Moorcock's political Warlord of the Air, nor is it the pure whimsy of Blaylock. It is a short adventurous romp using the plot devices of The Time Machine combined with a reincarnated King Arthur storyline. If you're expecting more, you're going to be disappointed. Go in with the same brain that enjoyed Saturday matinees of Doug McClure movies, and you'll likely have a good time. This isn't high-literature, it's high adventure based on high literature.
Email Post
Labels: Novels Seminal Steampunk