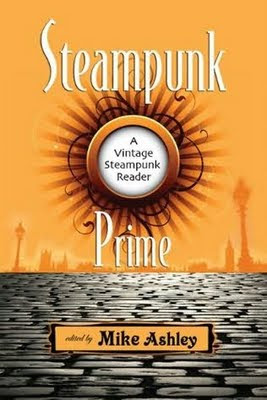 To kick off the May to June theme of Seminal Steampunk here at Steampunk Scholar, I begin with a book I do not consider steampunk, to clearly delineate what I mean by seminal steampunk from steampunk antecedents.

One of my recurring bones of contention is the tacit assumption that nineteenth century speculative fiction is steampunk. Lists of steampunk fiction regularly include Verne and Wells without any caveat to their works being inspirations or antecedents to steampunk. And while I understand the marketing strategy involved, Steampunk Prime is guilty of picking at this bone of contention.

In his introduction, "When Steampunk was Real," editor Mark Ashley makes several statements to the effect that Victorian and Edwardian science fiction is steampunk. While he concedes Edward Ellis's Steam Man of the Prairies as a "progenitor" of steampunk, he is not using this term in a grandfathering sense that many use Verne or Wells when constructing a lineage of science fiction writing. Rather, Ashley asserts this is where steampunk began. Avoiding all ambiguity, he boldly claims that "steampunk was well under way by the 1880s, but came into its own in the 1890s."

Those who frequent my blog will know I argue for steampunk's genesis in the 1970s with Moorcock in the UK, and Powers, Blaylock, and Jeter in the 1980s in the U.S. I'm open to a "blast radius" (in both directions - Wild, Wild West in the '60s and the increase in steampunk publications in the '90s) inclusion of other works within that period, such as Richard Lupoff's Into the Aether, but I firmly contend that steampunk is a postmodern phenomenon. Nevertheless, in the interest of keeping the debate open, I was willing to agree to disagree with Ashley, until I read his introduction to the very first short story in Steampunk Prime, where he makes a distinction of terminology:


We should not call these steam men or automata by the name robots. That word did not pass into the English language until the translation of Karel Capek's 1920 play Rossum's Universal Robots in 1923 ... For the steampunk period they were automata and, as the essence of steampunk, they feature in our first two stories. (12)

Ashley establishes and transgresses his rules of nomenclature, all in one paragraph. We ought to avoid  anachronistic terms for these nineteenth century artificial beings: don't call them robots--call them automata. I hate to be the nitpicker, but by the same standard, shouldn't we call it Scientific Romance Prime, as the term steampunk "did not pass into the English language" until K.W. Jeter coined the term, tongue-in-cheek, in 1987?

I can hear the protests already: I'm being anal retentive. Can't we retroactively subsume works which fall under the steampunk header, regardless of when they were written? To me, it's like saying The Eddas and Beowulf are high fantasy, which they are not. Tolkien used these as inspiration to write The Lord of the Rings, but that does not make them high fantasy. That is a twentieth century innovation. You might say I'm being restrictive, and you'd be right. I'm a guardian of precision in language, because too often I see the discussion getting inclusive to the point of insignificance.

What Steampunk Prime laudably collects under one cover are fourteen short works of speculative fiction. There is nothing retrofuturistic or neo-Victorian about it. Mark Hodder has a wonderful moment in The Strange Affair of Spring-Heeled Jack, when the enigmatic Jack names Sir Richard Burton one of the great Victorians, to which Burton replies, "What the hell is a Victorian?" (126). In Hodder's London, Victoria was assassinated: accordingly, there are no Victorians. But I had to laugh at this passage as a commentary on steampunk at large: we consider nineteenth century Brits to be Victorians, but they would not have. This is the perspective of the backward gaze, which is intrinsic to steampunk: literary or popular, political or frivolous, steampunk is commentary on some facet of the nineteenth century, even when it doesn't take place there.

What Ashley has collected in Steampunk Prime isn't retrofuturistic: it's futuristic. George Parsons Lathrop's "In the Deep of Time" an excellent example of what I mean, since the Time Traveler, sent forward by the Society of Futurity finds a world decidedly un-Victorian, and furthermore, un-steampunk. Where steampunk nostalgically revisits the fashion of the nineteenth century, Lathrop's Time Traveler summarily rejects it. In a comparison between Eva Pryor, his love interest from the nineteenth century, and Electra, a modern woman, the Time Traveler is decidedly attracted towards the Electra's costume, which seems pulled from the set of Logan's Run:


Charming though Eva was in her way, she had perhaps placed herself at a disadvantage by having insisted on keeping her nineteenth century costume. The angular slope and spread of her skirt, her unnatural wasp waist, the swollen sleeves, and the stiff, ungainly bulge of her corsage had a grotesque and even offensive effect. The extraordinary tangle, also, of artificial flowers, wings, and other rubbish that she had carried on her head-for she still wore her hat-was as barbaric or savage as the head-dress, of some early Norse warrior or Red Indian chief.
To all this Electra presented a refreshing contrast of harmony, with grace and dignity and style of dress modern, yet classic, womanly, yet suggesting the robes of a goddess. (99)

This is only one of several such rejections of the very style and aesthetic steampunk embraces. Admittedly, this cannot be restricted to corsets (and yes, all puns are intended), since other fashion choices abound in steampunk writing. Maria Boyd, the heroine of Cherie Priest's Clementine, finds herself needing to shed her undergarments in order to properly handle a bubble-turreted gatling gun; Matt Cruse finds Nadira's lack of corset alluring in Kenneth Oppel's Skybreaker; Gail Carriger's Madame Lefoux wears men's clothing. But these divergences from fashion norms still evoke the neo-Victorian retrofuture of steampunk. Lathrop's proclivities, do not - even the technology of the future dismisses the dreams of the nineteenth century: "They are on an entirely different plan from the flying machines which were announced but had not yet come into use when I was last alive" (104).

Even when the stories seem reminiscent of steampunk, we must remember they are antecedents to steampunk, and remain futuristic, not retrofuturistic. They are the science fiction of their day, not the nostalgic recreation of a romanticized past. There is a difference, and I think it is wrong-headed to claim them as steampunk: effective marketing, yes, but not accurate taxonomy. Steampunk is, at the earliest, a mid-20th century innovation.

All this said, people who like steampunk will enjoy a number of the stories collected in Ashley's anthology, as well as Paul di Filippo's excellent foreword. There is a wonderful mix, including adventure ("The Gibraltar Tunnel," my favorite of the lot), horror ("What the Rats Brought"), apocalyptic ("The Great Catastrophe"), and more. I applaud Ashley for unearthing these stories from the vaults they were in. Where I had expected an anthology of short stories by Verne, Poe, Wells, and other oft-cited steampunk antecedents, I found a collection of artifacts of what we should likely consider science fiction antecedents as well. This is speculative literature from the days before it had a proper name firmly affixed to it, providing us with a window into the birth of SF ideas that have become cliched: the very first story, "Mr Broadbent's Information," contains ideas possibly borrowed from Wells's Island of Dr. Moreau, prefiguring the four year life span of androids in Dick's Do Androids Dream of Electric Sheep, and "automata like prize-fighters" such as the one in James Lovegrove's steampunk short story, "Steampunch."

So even as I refuse to call Steampunk Prime steampunk--in much the same manner I refuse Verne, Wells, and other Victorian and Edwardian era writers as such--I cannot help but recommend it for those who enjoy genuine windows into the past. As artifact of bygone speculative fiction, Steampunk Prime is worth a read. My hat's off to the marketing strategists who decided to capitalize on steampunk's popularity to get this collection out there -- while it might offend my more pedantic sensibilities, the mercenary in me is glad this collection has not only seen the light of day, but might end up in more hands than it would have if it had been labeled Dusty Old Speculative Fiction primarily from the Edwardian Period.
Email Post
Labels: Antecedents Anthologies Seminal Steampunk