Apologies to anyone who was looking forward to seeing a Blaylock post today. Aside from doing Canuck Steampunk, I'm likely returning to posting reviews and analyses of whatever I've just finished, as working on the dissertation, writing for Tor.com and steampunk fanzines, and gearing up to be a DM again are occupying more and more of my time. In addition, no one should read Blaylock at high speed. The man's words are meant to be savored. So, for those who missed it, and because I use the blog as a hub to all my steampunk writing, here's my analysis/review of Anno Dracula from Tor.com: 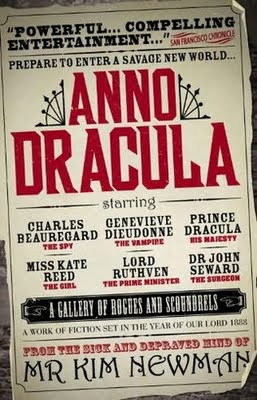 I think Kim Newman would agree with me when I say, “Once you go Drac, you never go back.” Or perhaps more accurately, “you might leave Drac, but you’ll definitely be back.” For my generation, there weren’t a lot of bloodsucking alternatives to the big D, aside from the Count on Sesame Street, or if you were older and not a Baptist, Warren Comics’ Vampirella. In the 70s, if you said “vampire,” people thought of Dracula, and “Dracula,” usually meant Bela Lugosi or Christopher Lee’s onscreen portrayal. I got my first copy of Dracula in grade four: Leonard Wolf’s annotated version. I never got past the first four chapters. Jonathan Harker’s story was riveting, but the Austenesque switch in voice to Mina Murray and Lucy Westenra writing about their love lives was lost on my pre-adolescent self. The illustrations by Sätty gave only a surreal window into the story’s later events.

As I grew up, more accessible options abounded: books like Stephen King’s Salem’s Lot and Anne Rice’s Interview with the Vampire; films like The Lost Boys and Near Dark. But when Francis Ford Coppola released Bram Stoker’s Dracula, I returned to Transylvania. Despite the film’s numerous digressions from the novel, my love of its visual splendor helped me finally finish the entire novel, finding to my surprise that final chase scene wasn’t a Hollywood addition. That same year, Kim Newman’s Anno Dracula hit the shelves, likely hoping to generate sales off the new film’s popularity, but somehow escaped my attention.
It wasn’t until beginning my steampunk research that I became aware of this wonderful piece of recursive fantasy, and I was thwarted in my first attempt to read it by some devious party, who had folded a space of some 70 missing pages together so well it escaped the notice of the used bookseller I purchased it from, and me buying it, until I turned page 50 or so and discovered the missing section. I tried soldiering on, but found myself somewhat confused, and abandoned the reading until I could find a complete copy.

Finding a complete copy up until this past weekend was a formidable task. Paperback copies on the Internet sold at collector’s prices ranging from $50-200. With the rabid interest in vampires via Twilight, and the growing interest in steampunk, Anno Dracula was clearly an in-demand-but-out-of-print treasure. Neophytes and veterans of Anno Dracula can rejoice at the new edition released by Titan Books. Sporting the best cover I’ve seen of it yet, this lovely trade paperback boasts a number of extras, including annotations, the afterword from the paperback edition, the alternate ending from the novella version first printed in The Mammoth Book of Vampires, extracts from a screenplay treatment, an article called “Drac the Ripper,” and a short story set in the Anno Dracula universe, “Dead Travel Fast.” Unless you’ve been the most assiduous collector of Newman’s Anno Dracula works, this book offers a number of treats, even if you already own a previous edition. For those who have never read it before, it means you won’t have to pay through the nose to experience Newman’s wonderful alternative history of Stoker’s fiction world.

The premise is hardly original; any writer reading the line in Dracula when Van Helsing says, “if we fail,” to his vampire hunting companions has wondered at the counterfactual ramifications of those words. Stoker himself posits the outcome, and this speech is reprinted as an epigraph in Anno Dracula. What if good had not triumphed? What if Dracula had succeeded in securing a place on Britain’s foreign shores? Worse yet, what if he had somehow seduced the Queen, and become the Prince Consort of the greatest empire on the planet in the nineteenth century? Further, what would you call a man who murders the new citizens of this half-human, half-vampire Britain? A hero? A serial killer? Who then, is Jack the Ripper, if he’s only killing undead prostitutes? These are the questions that drive Newman’s story, and while others may have considered them, may even have written them, Newman, like Dracula, will continue to stand as a giant among many peers, given his encyclopedic knowledge of vampire lore, both literary and pop culture.