Murdoch Mysteries: The Curse of the Lost Pharaohs is an exclusive 13-part original online series created as an extension of the fourth season of Murdoch Mysteries on Citytv. Featuring the stars of the series and illustrations by acclaimed comic book artist Francis Manapul (The Flash, Superman/Batman), the online adventure brings to life Constable George Crabtree’s first novel, "The Curse of the Lost Pharaohs." In each installment, Crabtree must work alongside Detective Murdoch, Julia Ogden and Inspector Brackenreid to battle mummies and evil villains in a valiant attempt to save the Queen of England and - in turn - the world. Produced using a hybrid of live-action video and breathtaking animation, this groundbreaking transmedia project will feature a new chapter of Crabtree's tale each week. The storyline of The Curse of the Lost Pharaohs has also been woven into the plot of the new season of Murdoch Mysteries, creating a unique 360-degree experience for fans. The first episode of this thrilling adventure will be launched on Citytv.com on Tuesday, June 7 following the premiere of season four on Citytv on June 7 at 9 pm ET. - From the CityTV Press Release I realize my seminal steampunk series has been punctured many times by other posts, but it's been a busy month filled with many reviews, the unexpected brouhaha of bustlepunk, and now, a public service announcement regarding a steampunk web series: Murdoch Mysteries: Curse of the Lost Pharoah. In short, the web series is a glimpse inside the imagination of Constable Crabtree who writes fanciful Penny Dreadful style stories. The web series is those stories. I've only seen Murdoch Mysteries twice, but I'm familiar enough with the character of Crabtree to see the brilliance in making him the focalizer of this steampunked version of Murdoch Mysteries. 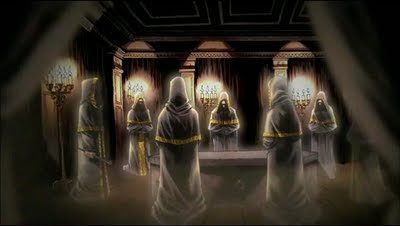 We're not seeing a period police drama, but a steampunk Penny Dreadful, a perspective reinforced by the inclusion of animated segments drawn by Francis Manapul. Watching a regular episode of Murdoch Mysteries and then watching Curse of the Lost Pharaoh is a little bit like seeing the difference between the layers of reality in Sucker Punch. Murdoch Mysteries strives for historical accuracy: like much steampunk, Curse throws it out the window. With a good dose of whimsy, the lead characters have been transformed into romanticized versions of themselves, with the funniest contrast being Dr. Julia Ogden's. On Murdoch Mysteries, Ogden is described as "a pathologist who works with the Toronto police force. She’s a forward-thinking, modern woman who can be quite blunt and straightforward." In Curse, she's a "comely heiress," who keeps abruptly showing up like Madame Yes, woman of mystery from that episode of The Flintstones. 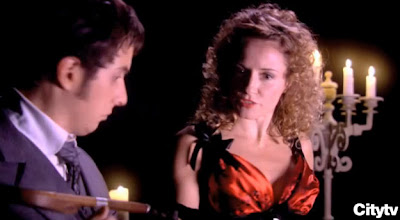 The folks behind Murdoch Mysteries: Curse of the Lost Pharoah are going to be giving away some very cool prizes every first Tuesday of the month for the next four months.