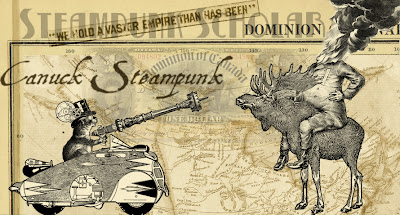 Once again, my best laid plans are too grandiose for my workload. I had hoped to include a few more reviews/analyses in this year's Canuck Steampunk, but between taking on a new course (Introduction to Comparative Literature), staying home with my kids most of the summer (my wife had to return to work), and punching out the dissertation, there simply wasn't enough time. My biggest regret was not getting to finish my review of Peter Tupper's The Innocent's Progress (which I'll now wrap up in February for the second annual Steampunk Romance and Erotica month at the site), and introducing you to Adrienne Kress, author of  Alex and the Ironic Gentlemen, which while not being specifically steampunk, should appeal to steampunk fans. Adrienne did forward a copy of her short story, "The Clockwork Corset" from Corsets and Clockwork: 13 Steampunk Romances

. It's a delightful love story set during World War I, and if it's any indication of the quality of the rest of the book, it's well worth your time.

I'd also hoped to get to Arthur Slade's The Dark Deeps and The Empire of Ruins, but my brain put me on forced vacation during the month of August (I'll be covering The Empire of Ruins in September as part of the Fall New Releases series of posts). I took a steampunk hiatus, trying very hard to be fully on holiday, which was really good for me, but bad for the completion of Canuck Steampunk. Oh well. As we say in Canada, c'est la vie. (While I was on my steampunk break, I read mainly high-fantasy and re-read Robert E. Howard's Conan stories. I also completed Canadian J.M. Frey's Triptych, which was a brilliantly challenging piece of pure SF. Frey has some steampunk in the cooker, so she's an author to watch for.) 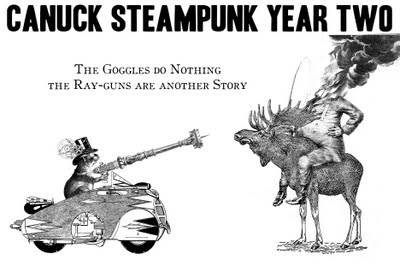 For those who are interested in these things, a little commentary on this year's Canuck Steampunk banner. I love David Malki's Wondermark, and wanted to pay homage to it. I knew I wanted some iconic Canadian elements, and chose the beaver and moose, and went from there. The beaver is a tip of the hat to both the Parks Canada logo, and Cory Gross's submission for the Steampunk Canada logo (which wasn't chosen, but was a clever idea). The finished image is the final frame of a cartoon I did for The Dominion Dispatch, which I'll post a link to once I have one. It's the punchline frame, and it struck me as the funniest. Most of the images that really made the banner "steampunk" came from The Sum of All Crafts, where Valerie B. has collected some really crazy images. 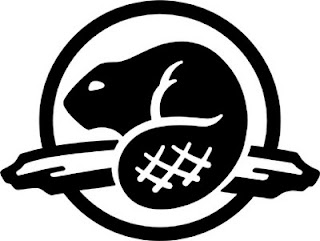 The dissertation lives in its first very rough form! I'm a few pages short of the minimum 200 pages right now, but that will get shored up in revision. While I had hoped to hand something in by the end of summer, the current document is too fragmented for submission, so I'm going to spend the fall semester polishing it up to make it shiny. I have two articles submitted for publication in two academic anthologies. Whichever one gets released first will have the distinction of being the first English academic anthologies on steampunk. The first of those I cast my lot like anyone else, with fingers crossed: the second came as a request, so I'm more hopeful about the article's inclusion. The first article is titled, "Useful Troublemakers: Social Retrofuturism in the steampunk novels of Gail Carriger and Cherie Priest." I'm very excited about that one, as it looks at steampunk retrofuturism's social aspect, as opposed to the more common technological one. The second is called "Flying Towards Grace: Steampunk and the Hole in the Sky," which looks at the tension between the rational and the fantastic in a selection of steampunk novels. Both will be added to the dissertation, so it's a two-birds-with-one-stone approach, which is what I've been trying to do with all my publications, with the exception of my Nemo article.

I'm still waiting to hear on approval of my research funds for a trip to Steamcon, but I'll be at Edmonton's Pure Speculation festival in November for certain, doing some panels and presentations, as well as running a game of Arkham Horror at some point over the weekend.

The fall ARCs are already pouring in, and I'll be doing my level best to report on as many as I can. We'll see how things go come high-marking season. My plan is currently to post bi-weekly this fall, which seems like a better plan than promising weekly, and then ending up publishing bi-weekly. I'll also be participating in Tor.com's Steampunk Fortnight, with an annotated version of the Steampunk Gilgamesh I posted in 80 tweets a few weeks ago. I'll be explaining the thinking behind my choices, which should, in effect, act as a case study of the steampunk aesthetic. As always, there will be links!
Email Post
Labels: Canadian Steampunk The Mission