The Map of Time by Felix J. Palma 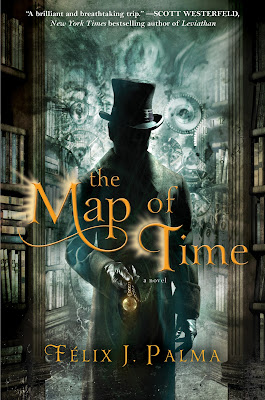 An exercise in never-judging a book by its awesome cover or overwrought hype (based largely in the mistaken idea that any book in translation must be brilliant!), I present my review for Felix J. Palma's The Map of Time, for those of you who might have missed it at Tor.com.


I once took a course in writing science fiction and fantasy from Canadian fantasy writer Ann Marston. In it, Ann warned against explaining oft-used concepts and tropes, as they no longer required explanation. She focused on post-apocalyptic literature that rambled on about how the world had ended, rather than advancing the story. Her point was that SFF readers have a vast intertextual repository of print and screen antecedents to fill in the gaps. A few hints are sufficient for the savvy speculative reader’s comprehension. Consider Cormac McCarthy’s The Road. How did the world become this burnt out husk? It doesn’t matter – the world burned, a father and son survived, and continue to survive. This is the story. We don’t really give a damn precisely how the world fell apart because we’re wrapped up in that story, no further explanation necessary.

While reading the third and final act of Felix J. Palma’s The Map of Time, I wondered if his target audience was someone who had never considered parallel universes, or alternate history, or time travel’s ripple effect. In short, someone who has never read Orson Scott Card’s Pastwatch: The Redemption of Christopher Columbus. For anyone familiar with possible world theory or Schrödinger’s cat, it feels terribly contrived. It’s like reading the alt history version of The Celestine Prophecy: characters exist only to deliver philosophical exposition. When H.G. Wells utters the words, “Does this mean we are living in . . . a parallel universe?” I couldn’t help myself. I took a red pen and wrote, “Gasp!” in the margin.

The awkward third act of The Map of Time is unfortunate, because there’s some really good writing in the first two acts. The problem is, Palma tried too hard to connect the dots for the reader, instead of letting it be a fragmented narrative involving Jack the Ripper, H.G. Wells, time travel, John Merrick the Elephant Man, and the sudden appearance of Bram Stoker and Henry James. Oh, and there’s a romance or two as well.