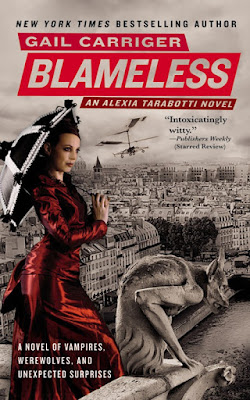 SPOILER ALERT: If you haven't read the previous two Parasol Protectorate books, I'm going to wreck all the surprises, so go read those before you come back and read this.

I begin our discussion of the third installment in the Parasol Protectorate by quoting another Gail--Gail Cunningham, in The New Woman and the Victorian Novel: "The fallen woman was a stain on society and had to be punished, either by the intolerable pangs of conscience or by death--preferably both." (21) Blameless finds Alexia in the role of fallen woman, rejected by Lord Maccon on the assumption of adultery, newly with child, firmly at the center of "The Scandal of the Century" (10).

When I taught Soulless, Carriger was mildly skeptical I'd find anything worth teaching. After all, as she once told me, the adventures of Alexia Tarabotti were a reaction to all the dystopic fiction she'd been seeing, in steampunk and speculative fiction in general. "I wanted to make people laugh," she said simply. And she succeeded. But being an addict of Masterpiece Theatre style drama rubs off on a writer, and insofar as such cinematic and televised adaptations are faithful to their nineteenth-century sources, so does the culture that informed them.

Without necessarily intending to, Carriger created a character who embodies and challenges common character tropes for women in nineteenth century fiction. Alexia’s desire to be useful to the BUR and later, the British Empire, provides a character arc that parallels the aspirations of the New Woman, that fin-de-siècle phenomenon of the New Woman, that “Protean figure” (Richardson and Willis xi), to quote Lyn Pykett, to whom Wilhemina Murray compared herself while seated at a typewriter in Bram Stoker’s Dracula. While it must be readily admitted, as Pykett states in her foreword to The New Woman in Fiction and in Fact: Fin-de-Siècle Feminisms, that the New Woman never existed, but “was (and remains) a shifting and contested term. It was a mobile and contradictory figure or signifier” (xi), the idea of the New Woman can be understood as the hope for social regeneration, a striving towards a future through the conception of “new, or newly perceived, forms of femininity which were brought to public attention in the last two decades of the nineteenth century” (1). Alexia embodies new forms of femininity, even for the radically different society of Carriger's London. She enjoys reading and pursues scientific knowledge at a time when “Education in itself was generally thought deleterious to female health” (King 18). And while she enjoys the attention of her husband, does not need him in order to survive, or to some degree, even thrive in Carriger's neo-Victorian alternate world.

Consequently, when this steampunk New Woman is cast in the role of the "Fallen Woman," she does not, like Madame Bovary, resort to self-destruction nor self-loathing. Her reaction to the women of London society in a Tea shop  may well engender applause in the theatres should Blameless find itself adapted for film, responding to invective with sharp wit:


Lady Blingchester, a mannish-faced matron of the stout and square variety with curly gray hair and too-large teeth, stood frowning down at her. She was accompanied by her daughter, who shared much the same expression and teeth. Both of them were known for having decided opinions on matters of morality.
"Lady Maccon, how dare you show your face here? Taking tea in such an obvious manner . . . in a respectable establishment, frequented by honest, decent women of good character and social standing. Why, you should be ashamed! Ashamed to even walk among us."
Alexia looked down at herself. "I believe I am sitting among you."
"You should be at home, groveling at the feet of your husband, begging him to take you back."
"Why, Lady Blingchester, what would you know about my husband's feet?" (57)

It is essential that we note Alexia's combative response to Lady Blingchester and her ilk, lest we be tempted to understand Alexia's next actions as flight. Alexia's response to her husband's dismissal, of society's gossip and reproach is not retreat: rather, she leaves London to go on a quest. Alexia's response to becoming the Fallen Woman is to ignore the dirty laundry and head for Italy and the society of the Templars. Admittedly, her motivation has come in the form of ballistic ladybug automata, but her undertaking of finding a solution on her own, without her husband's assistance, further supports what I said about steampunk women in "Steam Wars" when I called them damsels without distress. That isn't to say there won't be crisis after page-turning crisis once Alexia crosses the channel, but simply that Alexia and her steampunk sisterhood do not require the rescue of a Prince Charming to deal with it. They have inherited the earth prepared by the likes of Ellen Ripley.

Last year in Locus, I argued that steampunk isn't as interested in history so much as the history of Victorian and Edwardian literature:


"The mix of the historical and the literary have been the game of steampunk since its inception . . . Steampunk offerings continue to utilize a mix of historical figures whose lives have become legend, and fictional heroes whose stories have become truth in the minds of their readers, carrying on the tradition of blurring the lines between fiction as history, and history as fiction" (Sept. 2010 40).

Istvan Csicsery-Ronay Jr. puts it this way in his section on steampunk in The Seven Beauties of Science Fiction: "Steampunk works are, accordingly, not so much counterfactual, as, to use Matt Hill's term, counterfictional" (108). He clarifies by using Sterling and Gilman's London in The Difference Engine:


"Their focus is no on what might have been historically possible, which would presuppose the discourse of historical realism. Instead, they focus on the imaginatively possible, a dialectical mesh of fantasies of the Victorians' social, political, and cultural institutions, as both the Victorians themselves and the fin de millenium U.S. techno-bohemians might imagine them." (109)

Most discussions of steampunk retrofuturism are concerned with technology; but Carriger's heroine, as well as companions such as Madame LeFoux provide what I'm calling "social retrofuturism." Retrofuturism isn't simply how the past imagined the future - that would be Victorian futurism in steampunk's case. Instead, it is the way we imagine the past seeing the future. The ambitions of late Victorian progressives were less concerned with sky dreadnoughts and phlogiston powered rayguns than they were with medical advancements and human rights. Consequently, while Carriger's books have been somewhat derided as not being steampunk enough, as we'll speak of further when we discuss Heartless, I would argue that any work exploring the situation of women in the nineteenth century is as retrofuturistic, if not moreso, than ones positing technofantastic anachronisms, automatons, and airships.

For the steampunk New Woman is not the New Woman as she was imagined in the nineteenth century: she has far more agency than those women did, and is given the option to have her proverbial cake and eat it too. Unlike some expressions of the New Woman movement, Alexia does not hate the domestic sphere she occupies. This is arguably because she has power as part of the Queen's inner circle of advisors, but even still, she is not an Atwoodian heroine. Further, Alexia loves the fashion the New Women rejected: she is not an advocate for rational dress, as is seen repeatedly throughout the series, whenever Alexia becomes aware of how ill-suited her clothing is for high adventure. Yet she is still a type of New Woman, a fictional construct that may sadly still be needed to inspire women to transcend social conventions' constraints, if H.G. Wells' statement in Marriage still holds true:


"All the movement about us . . . women have become human beings. Woman's come out of being a slave, and yet she isn't an equal . . . We've had a sort of sham emancipation, and we haven't yet come to the real one." (qtd. in Cunningham 157).