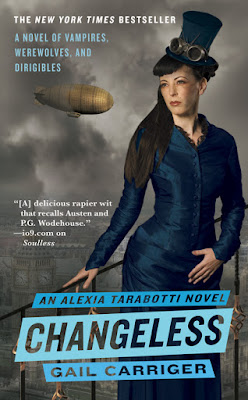 With a background in Comparative Literature, I think a lot about translation. When Carriger's Parasol Protectorate novels got translated into German, something got lost in the titles. Soulless, which is a lovely play on audience expectations of a novel about "Vampires, Werewolves, and Parasols" became Glühende Dunkelheit, which translates roughly to "Burning Night," or "Glowing Night," with connotations of torrid, hot and bothered, etc. It reduces the clever word play on reader expectations: I assume many, like myself, expected the soulless referred to the werewolves and vampires. Discovering it was the spinster protagonist subverted those expectations: the supernatural are not soulless. Rather, they have an abundance of soul. Alexia, our heroine, has none. There's nothing in a title like "Torrid Nights" or "Red-hot Nights" to subvert expectations at all. It plays directly into the assumptions many have about the Parasol Protectorate, based on the cover: they're romance novels, chick lit, bodice rippers (or bustle busters?). 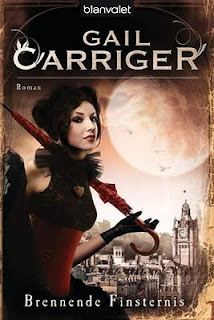 Further, the translation of Changeless became Brennende Finsternis, which can again be translated as "Burning Night" with associations of a torrid, hot and bothered nature. You can imagine the "typical" male of Germany looking to see a sequel to that last "Fiery Night" book and thinking, "wow, that writer must be a one-trick pony." I suppose that's how some would view Carriger here as well: "It's the "-less" author - don't take a class on writing with her - you get to discussing titles and she just recommends taking a word and adding '-less' (insert guffaw)." Even I stooped there with Daniel Sawyer one day on Twitter. But all cheap shots aside, these titles are clever, and Changeless might be the best of the bunch, given how it refers to several elements of changelessness: a mysterious power that nullifies a supernatural's power, so that in the case of werewolves, they are unable to undergo their change from human to wolf form; the tradition of Scottish werewolves, which refuses a woman the ability to be Alpha; and Alexia's assumption that intercourse with Lord Maccon, while dynamic, will never result in a particular change for her. 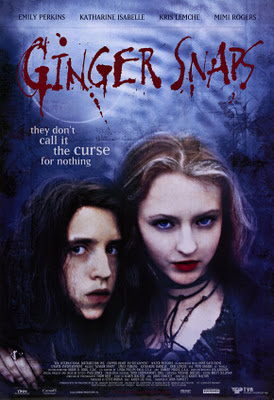 The absence of change for supernaturals highlights how the change affects them, and got me thinking about how Carriger has inverted yet another set of commonly held ideas about women in the Victorian era. Menstruation, a time of change, has been conflated with lycanthropy in several werewolf stories, but most notably to this Canadian in the Canuck horror film Ginger Snaps. The film's tag line read, "They don't call it the curse for nothing." In the Victorian period, menstruation was associated with madness, a "temporary insanity," and as Jeanette King notes in The Victorian Woman Question in Contemporary Feminist Fiction, was used as grounds to "defend women convicted of crimes like abortion, otherwise incomprehensible in women" (20). Carriger's uniformly male werewolf society are the ones subjected to this temporary insanity, in a way that highlights and satirizes the cult of machismo. This becomes clearer in the third and fourth books when a dandy becomes a werewolf, but is played out nicely in Changeless in both the verbal sparring between Alexia and the arrogant Major Channing of the Woolsey Pack, as well as the Rob Roy/Braveheart kilt-culture lampoon of the Kingair pack.

SPOILERS AHEAD.
Yet change is needed in the Kingair pack: their Alpha has died, and the best man for the job is a woman: Sidheag, Lord Maccon's granddaughter, who joins Alexia and the cross-dressing champion of the New Woman's "rational dress," Madame LeFoux as another hyperbolized, fictional realization of the nineteenth century New Woman. Carriger takes this egalitarianism a step farther than most would, not only permitting Sidheag to become the Alpha in the novel's last chapters, but doing it in a way that utilizes what Stephen King called "the gross-out" in Danse Macabre. It's akin to the violation of the nude female form in Ghost in the Machine, where a perfect manniquin-like female body is subjected to Robocop-level violence. Anyone expecting typical chick lit would find their horizon of expectation brutally savaged in the same manner Maccon must mutilate his granddaughter to affect the lycanthropic change. It's a profoundly disturbing scene that places the reader off balance for Carriger's final sucker punch.

The third changless/change interplay was controversial when the novel was first released. Some readers were angry, others impressed at Carriger's temerity, to end the second book on a book-chucked-against-wall-in-rage-that-you-don't-have-the-third cliffhanger. And what a cliffhanger.

Alexia and Maccon assume they cannot have children. We are told they cannot, and assume this is how Carriger's secondary world works. Then Carriger sneaks in Jeff Goldblum from Jurassic Park telling us how nature surprises us. Nature surprises Alexia and Maccon with a pregnancy. But Carriger's not done hitting us with surprises, like Alexia bashing us over the head with a parasol. Maccon accuses Alexia of infidelity, as this clearly cannot be his child. And just when the reader thinks this roller-coaster can't get any crazier, the tracks end, and we plunge into an abyss.

Talk about subverting expectations. If you were expecting a romance, you got none: that happened in the first book, and Maccon was largely absent for most of Changeless. It made me wonder if Carriger could construct a really serious conflict without her characters trying to get together. The finale of Changeless is a slap-in-the-face to conventional romance tropes: conventional romance can't have an unhappy ending. At least, not this kind. This isn't some tragedy where Maccon dies to save Alexia, which is sad, but bittersweet in a Titanic sort of way. No, this provokes hatred towards Maccon for his suspicious nature (which is, yet again, a subversion - isn't it usually the female that's considered suspicious?), and his histrionic reaction, to reject Alexia and render her as another icon of Victorian literature: the fallen woman (which we'll discuss next week with Blameless).

So one wonders what the German reader thinks of the title "Burning Nights" when she gets to the end of Changeless in Deutsch. After all, there wasn't a lot of burning, either pyrotechnic or passionate: marketing is a capricious beast at the best of times, and in this case, a savage werewolf chewing on your horizon of expectations. I at least had a relevant title, and I still wanted to throw the book across the room. My wife, who was nodding off to sleep woke up while I was reading it to her, and demanded to know, "Is that IT? You've GOT to be kidding me."

Which ended me up at a Chapters the next day, buying book three. If it had still been open at 11:30 the night before, I'd have been in the line in my housecoat. Talk about torrid nights.
Email Post
Labels: Gail Carriger Novels Romance