When I was a kid, I drew all the time. I won Most Promising Art Student in Junior High. I nearly did a degree in Fine Arts. And then life wore on, and while I've continued to dabble with my artistic skills, it's something I don't have much time for.

Which is why I bought a nice Wacom stylus for our iPad. And then I downloaded the Sketchbook app. And after a brief learning curve, getting used to how the stylus and screen interacted, I decided to draw Alexia. It happened in the middle of the night while I was awake after a coughing fit during Reading Week. I took an image of  Sabrina Impacciatore, one of Carriger's picks for casting Alexia, and placed her head on a shot of model Yaya Han in steampunk attire. Then I went to work. I worked on it when I needed a break, or when I was up late and couldn't wind down. I don't know how many hours went into this, but it was an enjoyable process, learning the Sketchbook interface, and getting back to a skill I neglect often, but love dearly.

It signals the end of my Tribute to Gail Carriger, and the beginning of three image-filled posts. I'm up to my eyeballs in marking (I'm effectively responsible for 250 students' grading this term), have final edits for an anthology chapter, an article for On Spec magazine, and a section for John Naylor's forthcoming Steampunk Gazette from Fil Rouge Press. So I hope the pictures will make up for the lack of a thousand words a week. Click on the image for a larger version. 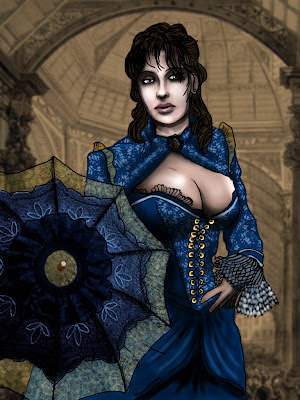