Ghosts of War by George Mann

Many thanks to Professor Cayne Armand, who closes this run of guest reviews, while I recover from the stress of finishing my dissertation and anticipate my oral defence on September 17 (the five year mission might be ending a year sooner!). You can check out Armand's science fiction serial at starmadacomics.com. 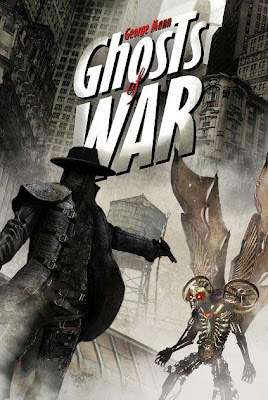 Initially hinted at in the ending of Ghosts of Manhattan, and featured on the cover of the novel, we spend much of this story interacting with the horrific brass and vellum raptors that are terrorizing New York City and who Lieutenant Donovan and the Ghost are trying to track down and stop. The characterization of these monsters is wonderful, painted in vivid strokes of inhumanity. This is contrasted well with the humanity of the Ghost. Where we spent much of Ghosts of Manhattan looking at the angst of Lt. Donovan, we spent much of Ghosts of War looking into the heart of the Ghost, and at his human struggle.

I will admit that my heart was thrilled to see such terrifically steampunk monsters, beings of brass and leather, using steam and pistons. The cogs of my heart churned furiously as the Ghost battled these monsters, not once, or twice, but the length of the story. While they’re not impossible for the Ghost to beat, they are a formidable foe – something that is often lost in modern storytelling. A villain that takes everything the hero can give--and then some--is a villain worth fighting. It makes a story worth reading. Mr. Mann quite thankfully chose this route.

We learn in this story that it was not The Roman that had created the moss and brass golems, but a mad scientist pressed into his service – and that these golems are his handiwork, as are the raptors.
These are not the only items of steampunk – as we had a continuation of all things that had been introduced in Ghosts of Manhattan. I’m happy to say that the dirigibles in this story do more than float ponderously in the sky – but I’ll not say more.

While the sophomore novels of a series are quite often the weaker novel of any series, the case is reversed here – Ghosts of War strikes me as the stronger of the two. As I said before, I recommend that you read both, to get yourself immersed in the storyline, in the world of the Ghost. I would recommend the purchase of both novels.

The story is not without its faults. While Mr. Mann does use grittier language throughout, he still refers to sex exclusively as “f**king.” I don’t know if this is a language disconnect, him being British and I, American. Not enough for me to put down the book, but jarring at those times I encountered it.

At a week’s remove from the story, I could now analyze very typical plot twists, twists that could easily be trite and clichéd. In the heat of the moment, as I flipped the pages of the novel as quickly as I could read, I didn’t notice them -- Mr. Mann’s use of them is enticing and refreshing. Where in other’s hands, they could detract from the story, Mr. Mann has woven a beautiful tapestry that pulls the reader along in excitement. This is absolutely a novel to let yourself be absorbed in.

While at first a bit off-putting to my scientific mind, I realized between the two novels that Mr. Mann’s reference to the supernatural through both stories is quite true to the Victorian period. I had at first thought to berate him for resorting to this measure rather than resorting to careful use of science. Reflecting on the novel after finishing it, I will actually give him applause for the integration of this aspect of Victorianism that is so often forgotten by other writers.

As I mentioned in my prior review, where we seemed to have two disparate setting pieces in Ghosts of Manhattan, I feel the two are well matched in Ghosts of War. Monsters of brass, vellum, and pistons assaulting the Big Apple in a reign of terror, a mad scientist working out his own longevity through artificial limbs, and the story culminating in a super-weapon quite apply powered by Tesla coils--I am much more pleased, and approve of the series on the whole.

Rating the story on our Steam Scholar’s scale, I would move this to a High rating for steampunk, and a B+ for the story and an overall B+ for the series.
Email Post