The End of the Mission 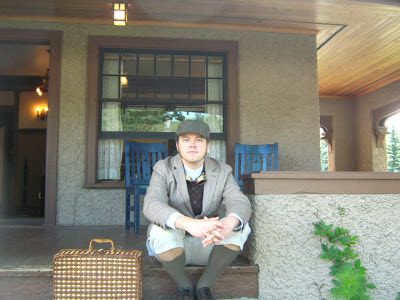 I had hoped to be attending Steamcon IV this weekend, but my summer writing went better than I'd anticipated, and as many of you already know, the mission I began in 2008 is over. The end of the mission has left me mentally fatigued beyond my expectations, and so I regretfully bowed out of my presentations and attendance at Steamcon back in September. While it would have made the best party to mark the end of the journey, a few unexpected sources provided other landmarks to commemorate the end.

On the beautiful fall day of September 17, 2012, I successfully defended my dissertation. It had been four years since I made travel arrangements to attend Steam Powered in California in the fall of 2008, the event which kickstarted my research in so many wonderful and unexpected ways. It was an introspective day. I taught two classes at Grant MacEwan University in the morning, and then headed across the river on Edmonton's light-rail transit to wander the University of Alberta campus. I ate at one of my favorite fast-food stops in HUB mall, and then sat outside Rutherford House, one of the oldest buildings in Edmonton, lazily reviewing my dissertation while reflecting on the import of what was about to happen.

For those who wondered, getting to the end of a Ph.D. is a hell of an anticlimax. The defense itself was not easy, but certainly enjoyable. My committee was rigourous, but congenial. A few commented that they found my dissertation enjoyable and funny. I don't know how often that happens, but I'll take it as a compliment. Drinks afterward were fun; food with my primary advisor, Dr. Irene Sywenky, was a quiet way to end the day. My kids left a phone message before they went to bed: "What's up, DOC?" But there were no fireworks. I rode home on public transit, and listened to music while I walked from the bus-stop. The next morning, I rose, and returned to my teaching duties.

But it was over. It took weeks for this to sink in. And the result? I chose to read something other than steampunk. For the first time in four years, I could choose to read something besides steampunk without worrying I was falling behind on my work. I read Superman: Birthright, which is one of the best retellings of the origin story I've seen yet. I started listening to Dennis L. McKiernan's Iron Tower trilogy on audiobook, a series I've wanted to read since my early teens. I watched a lot of Godzilla movies. I played Pokemon with my son, and fell asleep with my daughter. While I haven't hated the past four years, the pace has been fucking relentless. I am slowing down.

People keep asking me if I'm publishing the dissertation. Maybe. I don't know. Sure, why not? There are interested parties. But significant portions of the final work share ideas with published articles, so I need to look into the copyright issues first. Mostly, I don't care. I'm done. I'm finished. And I did it in four years, instead of the five I'd anticipated. That feels more spectacular than being Dr. Perschon, believe me.

Reading through all those pages in preparation for the defense got me thinking about the goals I set when I started. I wanted to be in the avant garde of some area of research. I wanted to be the person other people had to quote and cite, to have the theory they needed to argue for or against. I wanted to be published in both academic and popular venues. 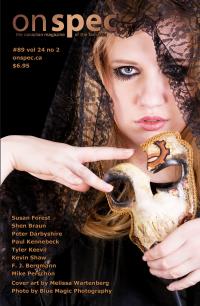 In the weeks leading up to the defense, On Spec magazine published its summer issue. I am a big fan of On Spec, so when they approached me about writing an article on steampunk for the magazine, I was elated. I have yet to conquer the fiction submission to them, but having the ask me on spec to write for On Spec was a real honour. My article is a summary of the dissertation, an accessible introduction to my theory of the aesthetic, titled "Through a Glass, Brightly: The Goggled Gaze of Steampunk." In it, I explain the aesthetic of steampunk through the "lenses" of neo-Victoriania, technofantasy, and retrofuturism. You can order the issue over at the On Spec website.

In the time since the defense, Steaming into a Victorian Future: A Steampunk Anthology  was released. Edited by Julia Taddeo and Cynthia Miller, this book represents the first academic anthology on steampunk in English. It's a gorgeous looking volume, and it contains the academic article I'm most proud of: "Useful Troublemakers: Social Retrofuturism in the Steampunk novels of Gail Carriger and Cherie Priest." Better still, Taddeo and Miller have organized the book with thematic coherence, so that my chapter is the middle act in an unintentional conversation on social commentary in steampunk. I'm not just proud to be part of this book, I'm proud to share space with writers who have been colleagues along the way, such as Dru Pagliasotti and Diana Pho. 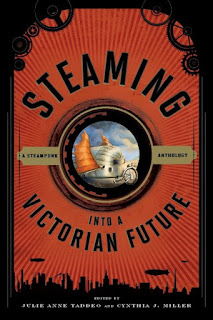 In all honesty, I was more excited about On Spec and Steaming into a Victorian Future than I was about finishing the Ph.D. Sure, I'm relieved all that work is finally over. I'm grateful that I will no longer be graded. But the one-two punch of seeing my work recognized in both popular and academic venues confirmed that I had achieved what I set out to do when my advisor first asked me, "What will you be writing on for your dissertation?" I had suggested Nine Inch Nails' Year Zero as a collage of dystopic fiction, but she dismissed it outright: "Dystopia's been done to death. What else are you considering?"