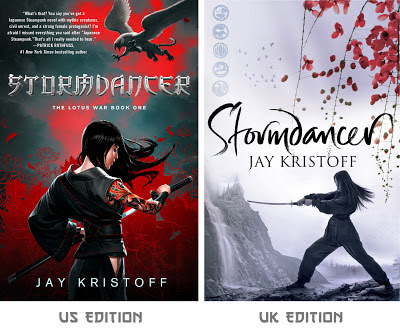 By the end of writing my dissertation, I had grown to hate steampunk. I couldn't read it, I didn't want to discuss it, and even thinking about it was abhorrent to me. It's apparently a common allergic reaction to one's subject matter at the end of a long writing project.

In the middle of this aversion to steampunk, Jay Kristoff's Stormdancer arrived in the mail. I'd been looking forward to reading this book since Jay had first announced it would be released. I was in complete agreement with Patrick Rothfuss's cover blurb: "What's that? You say you've got a Japanese steampunk novel with mythic creatures, civil unrest, and a strong female protagonist? I'm afraid I missed everything you said after 'Japanese steampunk.' That's all I really needed to hear."

Here is the publisher's blurb:

The first in an epic new fantasy series, introducing an unforgettable new heroine and a stunningly original dystopian steampunk world with a flavor of feudal Japan.
A DYING LAND
The Shima Imperium verges on the brink of environmental collapse; an island nation once rich in tradition and myth, now decimated by clockwork industrialization and the machine-worshipers of the Lotus Guild. The skies are red as blood, the land is choked with toxic pollution, and the great spirit animals that once roamed its wilds have departed forever.
AN IMPOSSIBLE QUEST
The hunters of Shima's imperial court are charged by their Shōgun to capture a thunder tiger – a legendary creature, half-eagle, half-tiger. But any fool knows the beasts have been extinct for more than a century, and the price of failing the Shōgun is death.
A HIDDEN GIFT
Yukiko is a child of the Fox clan, possessed of a talent that if discovered, would see her executed by the Lotus Guild. Accompanying her father on the Shōgun’s hunt, she finds herself stranded: a young woman alone in Shima’s last wilderness, with only a furious, crippled thunder tiger for company. Even though she can hear his thoughts, even though she saved his life, all she knows for certain is he’d rather see her dead than help her. But together, the pair will form an indomitable friendship, and rise to challenge the might of an empire.


I've been a dabbler in Asian literature and film since my teens, when I was caught up in the same fever as many other males of the '80s to be Sho Kosugi, Storm Shadow, or Nicholai Hel from Trevanian's Shibumi. Since then, I've grown more refined in my tastes, and thanks to Jha Goh and Diana Pho, am growing in my awareness of when this dabbling is inappropriate appropriation. In addition to enjoying Japanese popular culture, I'm a fan of Chinese classic literature, particularly Journey to the West. So I've been waiting for someone to provide the steampunk scene with a satisfying tale in an Asian steampunk world. While there are no top hats, corsets, or cravats to be seen, Stormdancer is heavily saturated with the steampunk aesthetic.

I could talk about Stormdancer as the rejection of Victorientalism, that term that in many ways embodies what's wrong with cultural appropriation in steampunk. I could tell you that it's the first moment of Asian steampunk I've read where the focalizer is not a Westerner acting as a lens for the outsiders to see in. Stormdancer's protagonist is an insider of this secondary world based in pre-industrial Japan, but is an outsider of privilege, due to her clan affiliation and the fact that she's a woman. Kristoff may be an egalitarian, but the Empire that forms his world is not.

I could talk about how Kristoff successfully applies the steampunk aesthetic to a world ruled by the Bushido code, innovating the tired technofantasy of most steampunk: instead of brass rayguns, we are given Chain Katanas; instead of Graf Zeppelin ripoffs, we're given something like a cross between a Chinese junk and a dirigible, powered by Kristoff's best novum, the powerful Chi, which is both fuel source and ecological threat. Unlike so many steampunk fuels, the Chi matters beyond its ability to make impossible technologies possible. It isn't just a convenient way of explaining how the airships fly in Stormdancer - it's the source of rampant social problems in Kristoff's secondary world. It allows Kristoff's civil unrest to be more than just "the individual against Empire." Kristoff's characters wrestle with the ramifications of changing the way things are. They see the damage Chi mining has done to the earth, but know that changing the way things are is complicated. Revolution is never simple.

But I vowed that when I finished the dissertation, I'd write like a fanboy. And despite being saddened that I read Stormdancer so late in the process of research, given how much I'd have used it as a positive case study of radical nostalgia, there is simply no better place for me to start being a fanboy than with Stormdancer. As I said, I was sick of steampunk when Stormdancer arrived. Nevertheless, I took it with me on a speaking trip, and when I found spare reading time that week, I instantly fell in love with this book. I highlighted passage after passage, not for their academic utility, but for the beauty of Kristoff's prose. Despite being a compelling page-turner, I refused to rush ahead in my reading, for fear I'd miss one of Kristoff's gorgeous descriptions or captivating, and at times heart-wrenching, dialogue. Kristoff never engages in clunky exposition, relying instead on his well-crafted and artfully placed descriptions of the world of Stormdancer.

This book will not appeal to all. I'm sure some will wonder at my praise for it, criticizing it for being too derivative, wordy, or poorly researched. On the subject of wordiness, Kristoff does not waste his words. They all inform. If one doesn't like description, then Kristoff's style will chafe.I found it a refreshing change from the shallow action-prose of so much steampunk. One might accuse Kristoff of ripping off Frank Herbert's Guild Navigators, but I'd say he's riffing on David Lynch's interpretation of the Guild Navigators with even more of the steampunk aesthetic thrown in. Certainly, Kristoff shows his influences, but what author doesn't? All writers stand on the shoulders of giants. Kristoff arguably invites us in to stories we've heard before, combined in ways we haven't imagined before: this is the heart of steampunk, the appropriation of many elements brought together in a glorious bricolage. For many writers, those elements spin out of control. Kristoff never allows the multiplicity of elements to get out of his hands. We see echoes of Naomi Novik's Temeraire or Christopher Paolini's Eragon in the intimate bond between rider and mythic beast. We recognize Knights in Shogun and demons in Oni, but there are crucial differences, and they change what is familiar to a Western reader to something new, something fresh. At times, it's like a mashup of Legend of the Five Rings with Iron Kingdoms. One of the highest bits of praise I can give a writer is that I want them as my DM. I want Jay Kristoff as a DM for a full campaign. Kristoff's world building is so complete and convincing, that at times I forgot I was reading about a secondary world, despite knowing that his use of Japanese culture has tenuous adherence to real-world history.

It has a strong female lead, a heroine who makes mistakes, who can fall in love with the "samurai with the sea-green eyes" but who is anything but a twitter-pated boy-crazy girl. She battles with ferocity, thinks with alacrity, and acts in nonconformity, in a world where adherence to Empire is everything. There are bloody, visceral battles, captivating characters whose lives and deaths matter to us, sympathetic scoundrels and onerous Emperors alike. It even has "punk," the counter-cultural ideology of radical resistance allied with eco-criticism, as these steampunk raise arm against an Empire worth rebelling against to arrest the destruction of their world by pollution.

To say I'm excited for the sequel is an understatement. The conclusion made me cry in public. I've not only had to adjust my list for top five steampunk books of the year, but I think I'll likely be adjusting my top ten steampunk of all time. It's that good. I know this is true, because at a time when I got hives whenever someone said "steampunk," I was flying through the skies of Jay Kristoff's Stormdancer on the airship Thunder Child, hunting a thunder-tiger.
Email Post
Labels: Asian Steampunk Novels