My apologies for promising a Doctor Who series this Christmas, and producing nothing. End of term marking was brutal this year, and then I fell ill and spent my holidays convalescing. I can only hope the next year is better for the blog.


As always, my list is somewhat incomplete, given that I have not read every work of steampunk released in 2012. I no longer purchase steampunk books, for the simple fact that the entirety of the ARC stack remains unread every year. Nevertheless, of the books I chose to read (and even that is a statement about the books that remained unread, is it not?), these are the best and brightest. While this year produced so much excellent steampunk I could easily have made this a top 10 list, I prefer the exclusivity that a top five list provides. This year is an anomaly, in that it contains Brian J. Robb's, Steampunk, which is not a work of fiction, but is, for my money, the best coffee-table book on the history of steampunk. 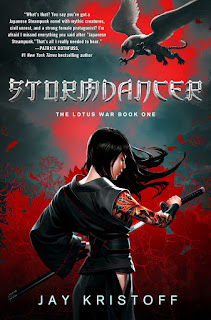 1. Stormdancer by Jay Kristoff. I love this book. I've been waiting for some kick ass Asian steampunk since I wrote my "Steam Wars" paper in 2008, and was glad to finally get the chance to read some. I know there are other examples out there, but Kristoff hit all the right notes with me. I read Stormdancer right after I submitted my thesis, and was fed up with reading anything steampunk. Despite that aversion, the story dragged me in immediately, and I don't get to say that very often. I love Kristoff's writing style, which some may find too florid or dense. I love the symbiotic relationship between the  female protagonist and the magical griffin, which evoked shades of Naomi Novik's His Majesty's Dragon at its best. I loved that Kristoff is willing to kill his characters, since an adventure story without cost isn't much of an adventure. And I'm dying for the sequel. 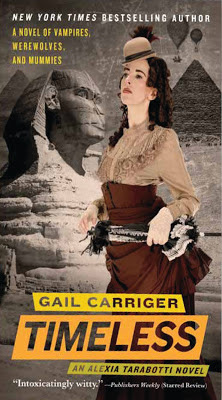 2. Timeless by Gail Carriger. If you haven't read this by now, go away, because I'm going to gush about all the spoilers I couldn't when I reviewed this book for Tor.com back in March. I have loved the entire Parasol Protectorate series, and this book was no exception. Every major character was given their due, and while some of those moments were tragic, from Lyall's exile to Floote's betrayal, there were so many more which were gorgeously satisfying: Ivy's death and subsequent undeath, which would have seemed ridiculous upon meeting her in Soulless, was perfect, but only because of how Ivy has proved herself over the series. Biffy's rise to Beta made all the sense in the world, and his deft tongue-lashing of Felicity Loontwill was one of my favourite moments in the whole series. Carriger even carried off Maccon's death convincingly enough to have me up late one night, furiously turning pages to find out if Lord Woolsey really was dead. Alexia finally got to be terribly, terribly wrong, which her character needed, but remained true to her character to the very end. Carriger has set the board well for the upcoming sequel series, and while I was sad to see this first series end, I'm glad she finished strong, and didn't drag the story out until it went out with a whimper instead of a bang. 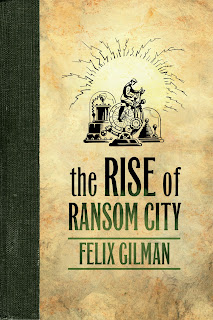 3. The Rise of Ransom City by Felix Gilman. Fans of The Half-made World might find Ransom City's memoir-style off-putting, but I applaud Gilman for being adventurous enough to relate the second book in this fantasy-Western in a somewhat whimsical first-person perspective. Seeing both the characters and the world of Liv Alverhuysen and John Creedmore with fresh eyes was a welcome change. Too many series fail for a lack of innovation beyond "the story continues," but that is not the case with Ransom City. In addition to being a strong addition to the Half-made World series, the book is an excellent example of self-reflexive fiction, complete with a somewhat untrustworthy narrator, a frame narrative reminiscent of Cervantes, nested tales, and ruminations on the nature of reality and fiction, which makes Ransom City an excellent choice for steampunk scholars. 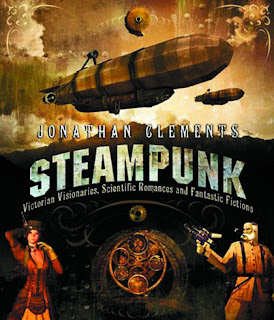 4. Steampunk: An Illustrated History of Fantastical Fiction, Fanciful Film, and Other Victorian Visions by Brian J. Robb. This is the first year that my top five list has included a work on non-fiction, but given that Robb's is not the first of its kind, a coffeetable book seeking to take an encompassing look at steampunk, we may be seeing more in years to come. That would be somewhat disappointing, since Robb's book strikes me as pretty damn comprehensive, focusing primarily on the literary and cinematic history of steampunk, with only two out of nine chapters devoted to steampunk as subculture. I'm certainly biased when it comes to this book, since my focus has been literary and cinematic, and I sometimes felt like Robb had been looking over my shoulder, cribbing notes from my blog or dissertation. But that's just my way of saying I agree with what the book has to say about steampunk. It's a gorgeous hardback with great choices for illustrations. Well worth picking up for neophyte steampunk scholars looking for a survey text. 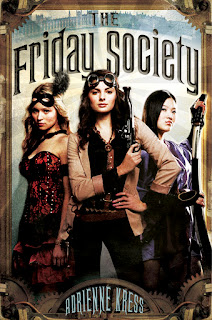 5.  The Friday Society by Adrienne Kress: Some will find this last one an odd candidate for my top five, but if I've worked toward anything here at this blog, it's been to be fair in my reviews. If your brand of steampunk is Mieville or Hodder, you won't enjoy The Friday Society. This is a YA book. A YA grrrl power book. It features girls who kick ass. And it kicks ass. Shit blows up in this book. These girls give new meaning to the word "bombshell," given how much shit blows up in this book. It is on this list, because it won me over, despite me thinking I wasn't its target audience. Think Gail Carriger meets Charlie's Angels meets Sucker Punch meets shit blowing up (I suppose those last two were a little redundant). I know some of the more serious steampunks out there will revile its inclusion on this list, but all work and no play makes Mike a dull boy. And Adrienne Kress's Friday Society is anything but dull.

Special mention goes to Devon Monk's Dead Iron, which was published in 2011, but I didn't get the chance to read it until this year. It's an excellent page-turner set in a steampunk old-West filled with werewolves and Faeries. Think Holly Black meets Hell on Wheels and you have the right feel. Kudos also go out to Rush for Clockwork Angels, but I only add reads on this list, and while I'd like to bend the rules for Neil Peart's lyrics-as-poetry, I'll have to wait until I've read the accompanying book to judge whether Kevin J. Anderson's novelization belongs on this list or not. I'll be writing full reviews of these books in the weeks to come, now that the dissertation is behind and the blog alone ahead. Happy New Year, everyone!