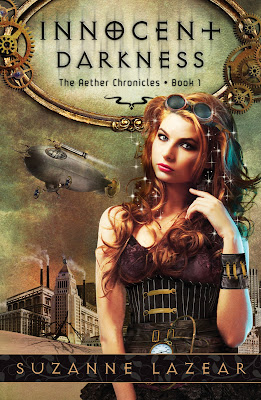 Innocent Darkness was a difficult book for me to review, because the cover lead me to expect solid steampunk, not the three narrative threads the book contains: the book's first three chapters are steampunk, while chapters 4-11 are neo-Victorian, with the remaining chapters a paranormal romance set amidst a Faerie Court. However, this is less a narrative problem than it is a marketing one.

The first three chapters are set in a steampunk San Francisco, which is lovely given the abundance of steampunk culture in the real-world Bay area. I love Lazear's use of hot-rod culture in the steampunk chapters, with the protagonist Noli modifying an "old Hestin-Dervish Pixy" which belonged to her father, a section which I read in tandem with an article on Rat-Rods, a trend in hot-rodding that shares some kinship with the steampunk aesthetic. As a girl working on hot-rods,Noli belongs to the ever-growing steampunk New Woman's club, joining the likes of Alexia Tarabotti and most of Cherie Priest's protagonists. However, Noli's rebel-thrill-seeking ways do not follow her throughout the book, and she loses all semblance to the New Woman when she is shipped off to a strict reform school for girls at the end of chapter three.

While this is to be expected, given the soul-crushing atmosphere of Findlay House, a hybrid of an insane asylum and the bedroom from Charlotte Perkins Gilman's "The Yellow Wallpaper," I was nevertheless disappointed by how entirely cowed Noli becomes in the face of behavior modifying punishments. I was further saddened that Noli's penchant for working with machines is likewise forgotten during her sojourn at Findlay House, so that by the time she escapes, all steampunk aspects have been left behind, save in passing. Despite these quibbles, this section of the book is Lazear's strongest, and taken on its own is a brilliant bit of writing. I stayed up late, needing to know if Noli survived the ordeal, and how she did so.

The third narrative thread, and the one that takes up the lion's share of the narrative space, is a paranormal romance set in Faerie, intertwined with the intricate machinations of a faerie court. I read a lot of fairy-tale fantasy when I was writing my M.A. thesis, and can say that Lazear has written a fine fantasy romance/adventure at the tail end of Innocent Darkness. Readers who enjoy Holly Black's Modern Faerie Tale series will also enjoy this portion of Innocent Darkness. I was nonplussed by it, simply because the strong steampunk New Woman who I met at the beginning of the book was lost for a time, recovering from her harrowing reform experience, and laboring under a Faerie enchantment. I made the mistake of having too many expectations, believing the book to be steampunk from start-to-finish. I expected the Hot-Rod-modding Noli to break out of the Findlay House on her own steam, using steampunk tech to do so. This did not happen. I expected her to get up in an airship at some point and kick some ass, and that didn't happen. My horizon of expectation was thwarted by the shifts from steampunk to neo-Victorian to Faerie spaces.

Such shifts in aesthetic or genre are not the problem with Innocent Darkness though. As an academic reader, I'm used to shifting my expectations, and by the twelfth chapter, when I realized that the steampunk world of San Francisco had been left behind for the world of Faerie, I reoriented my view to compensate,  to continue enjoying my reading. However, most readers are neither so accommodating nor forgiving, and if the Goodreads reviews are any indication, there were a number of readers expecting a thoroughly steampunk story who were disappointed with the lack of steampunk.

This is not Lazear's fault. The cover and marketing of a book are rarely in the hands of a newly published writer who isn't self-publishing. The cover of Innocent Darkness is misleading in a number of ways, from how conventionally attractive Noli is on the cover to the focus on steampunk to the exclusion of Faerie elements. Aside from sparkles in here hair, there's nothing on the cover to imply this book will contain elements of magic. The cover seems to be capitalizing on the popularity of steampunk, and Flux books should know better. To try and package what is predominantly a period-urban-fantasy/paranormal romance as a purely steampunk book is a bad move, and one that many steampunk readers may not be in any hurry to forgive.


Thankfully, Lazear is an active member of the online steampunk community, and I hope readers who can't forgive Flux for shoddy, inaccurate marketing will forgive Lazear, and continue with The Aether Chronicles further adventures. I'm suspicious that the steampunk elements came late to the drafting process, but knowing Lazear's love for steampunk, am certain that the next book in the series, Charmed Vengeance, will contain more brass and gears, and from the online summary at the Innocent Darkness website, Noli in an airship kicking ass. Despite its shortcomings, I enjoyed my read of Innocent Darkness as an entertaining promise of things to come, and look forward to exploring more of the steampunk/Faerie world Lazear is crafting.
Email Post
Labels: Fairie Romance Technofantasy YA Steampunk