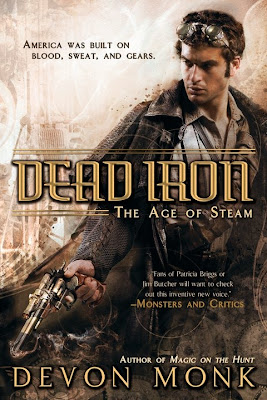 Just when I think I'll have extra time, another deadline beats me up and throws me around my office. This past month had me prepping a very large document for my three-year review here at Grant MacEwan University, so I had a flashback to the level of busy I was during the Ph.D.

It's all handed in now, and I'm ready to get back to writing once a week for this blog. I've got two steampunk books on the go in my reading right now, but I'm turning my review attentions further back, making good with a better-late-than-never promise to Devon Monk, who sent me Dead Iron for review many, many moons ago.


In steam age America, men, monsters, machines, and magic battle for the same scrap of earth and sky. In this chaos, bounty hunter Cedar Hunt rides, cursed by lycanthropy and carrying the guilt of his brother's death. Then he's offered hope that his brother may yet survive. All he has to do is find the Holder: a powerful device created by mad devisers-and now in the hands of an ancient Strange who was banished to walk this Earth.

In a land shaped by magic, steam, and iron, where the only things a man can count on are his guns, gears, and grit, Cedar will have to depend on all three if he's going to save his brother and reclaim his soul once and for all...


Dead Iron is the first book in Monk's Age of Steam series, which is at two books with Tin Swift as of last summer, and Cold Copper set for release in July of 2013. Dead Iron is well-paced, imaginative steampunk-Wild-West-fantasy, with enough new twists on old ideas to keep this reader interested. And at this point in my steampunk reading career, that's saying a lot. As with most good steampunk, it's the blurring and blending of several genres that makes it so much fun. While Western-steampunk isn't anything new, Western steampunk with werewolves, Fae creatures called the Strange, and folk magic is. Western steampunk has been a fixture of the aesthetic since as early as the '60s with Wild, Wild West, or as late as the '90s with...well, Wild, Wild West (I know Rudy Rucker's 1990 Hollow Earth takes place in America, but it's not a Western). Ian R. MacCleod used Fae elements in The Light Ages in 2005. And folk magic is a fixture of steampunk as early as Keith Roberts' Pavane (1966) or as late as Karin Lowachee's Gaslight Dogs (2010), depending on how inclusive you want to be.

I wouldn't for a moment suggest that any of these works are antecedents for Dead Iron: I'm simply forestalling objections to the use of Faerie and folk magic in steampunk. Magic has always been part of the scene, from Tim Powers' Anubis Gates to Ekaterina Sedia's Alchemy of Stone. But the magic of Monk's Age of Steam feels like it shares kinship with Orson Scott Card's Alvin Maker series, crossed with the dark faerie courts of Susannah Clarke's Jonathan Strange and Mr. Norrell. My quick and dirty description of this book is to say, "Imagine Hell on Wheels got crossed with Grimm." It's not entirely accurate, but it's a decent ballpark, especially in the reference to Hell on Wheels. Dead Iron is far grittier than I'd anticipated. Something about the cover said it was on the border of the romance market, and while matters of the heart are part of Monk's tale, this book shouldn't be shelved in the romance section. That's why I held off putting up the February top bar for today. Dead Iron is not a romance. There is romance in it, for sure, but this is a straight-shooting Western in a left-of-centre alternate world where rail barons are quite literally the demons of the rails. I don't want to say a ton about plot, as I find plot summaries somewhat pointless, but there's a gunslinging werewolf with a tragic chip on his shoulder, a widowed witch with a vendetta against the Strange bastard who killed her husband, that zombiefied husband whose heart beats with love and Terminator's tenacity, and some crazy tinkering brothers in the hills who remind me of the conniving dwarves in the Niebelungelied for some reason.

Halfway through Dead Iron, I found myself mystified as to why I wasn't hearing more about this series in steampunk circles. So many fans of steampunk are fans of urban fantasy and old west, and that's effectively what is getting mashed together here. To use the language of my aesthetic theory, it's set in a fantastic nineteenth century (hyper-Victorian), contains steampunk tech powered by magic (technofantasy), and features a woman who acts with agency in a period when it was hard for women to do so (social retrofuturism). Devon Monk writes accessible, page-turning adventure fiction, in an alternate world that coheres very nicely. It was one of my favorite reads of the past year, getting a shout-out in my top 5 of 2012, despite its 2011 publication date. Don't wait like I did. Get into the Age of Steam now, so you'll be ready for book three when it comes out later this year.