The Friday Society by Adrienne Kress


I don't so much teach short stories as use them as a means to talk about literary concepts. Likewise, I often respond to books more than I review them, using them as a means to talk about the steampunk scene at large. Besides, you can get a plot synopsis off Goodreads or Amazon. My reflections on Adrienne Kress's The Friday Society are emblematic of this, since I'm not sure a review of squee is what the book needs. There's a lot of squee out there for The Friday Society, including my assessment of it as one of my top five steampunk reads of 2012. It's fun fiction, targeted at YA readers who enjoy female protagonists and a healthy dose of amour with their adventure. I found it thoroughly enjoyable, but after four years of immersing myself in steampunk reading, playing at the fringes of steampunk culture, and hovering over debates in steampunk fora, I can hear supercilious naysayers disregarding Kress for the anachronism of her writing style alone. On the first page, an explosion is described as loud, bright, and explosion-y. This is not Gibson and Sterling, aping the writing styles of the nineteenth century. This is a cheeky modern author who uses playful tone and modern idiom to make her heroines accessible to her ostensibly YA readership. In many ways, Kress's approach to writing reminds me of Gail Carriger, but in a less Victorian fashion. Steampunk hipsters and snobs will find much to complain about in The Friday Society.

Which is one of the reasons I developed my theory of the steampunk aesthetic in the way I did. At the blog Entropic Worlds, the excellent post "Critical Engineering: A Perspective on Defining Steampunk" astutely recognizes that my "set of constraints seems to be effective at determining how steampunk something is, though not necessarily how good a work of steampunk  is." This assessment is reminiscent of Jess Nevins' division of prescriptive and descriptive approaches to defining steampunk. I am descriptive. Entropic Worlds seems to be defining steampunk prescriptively: "I am personally more interested in reading a book that does steampunk well, even if it only does it a little bit, versus a steampunk book that is unoriginal and uninteresting, regardless of how filled it is with dirigibles, aether, and parasols." Entropic Worlds' basis for good steampunk is value based, a definition that ultimately tells the genre or aesthetic where is should be going. As an educator, I applaud the impetus toward quality or greater engagement with social concerns, but this does not describe steampunk. It describes a movement in steampunk toward writing that engages these ideas. Entropic Worlds cites The Difference Engine as exemplar of how steampunk should be, citing the novel as "one of the most universally accepted examples of the genre." Locus magazine argued that The Difference Engine was too realistic to really be steampunk - in short, it wasn't gonzo enough. I tend to agree. The Difference Engine could be seen as reaction to the gonzo steampunk of Blaylock, Powers, and Jeter's Morlock Night, but is hardly the seminal archetype of what steampunk should be.

I like serious steampunk. I like steampunk that is socially significant, as Entropic Worlds recommends. And while I can read social significance into Kress's The Friday Society through the three female leads in much the same way I did when I read Alexia Tarabotti/Maccon as steampunk New Woman, I do not have the impression that this was Kress's explicit intention. I have more a sense of steampunk Charlies Angels than I do steampunk Herland. Kress's three heroines, Cora the inventor, Nellie the magician's assistant, and Michiko the blademaster, all face marginalization by the males in their life. However, this is as much a standard device of most YA fiction about young women as it is a commentary on the plight of women in the nineteenth century. I can read it socially, and I can read it politically. I can discuss how steampunk fiction addresses these concerns. But to prescriptively delineate the boundaries of good steampunk based on a work's qualitative engagement with those concerns is to ignore a significant portion of steampunk writing, consequently hobbling steampunk scholarship in the same fashion as general SF scholarship, which is often so busy talking about gender in The Left Hand of Darkness it sometimes forgets to talk about Star Trek's first onscreen interracial kiss.

I hope young readers of The Friday Society can see how Cora, Nellie, and Michiko are the navigators on their seas of fate, but in the event they don't, I'll be glad they're enjoying a page-turning adventure that allows them to explore three different personas through those women. Young readers are still discovering who they are, and Kress has done a lovely job of giving her readers three very different heroines to identify with. I like Michiko best myself, but you might think Cora is cooler. Or maybe I related to Nellie a week ago, but I feel more Michiko today. And even if I don't do that, isn't the scene where the old man gifts that awesome sword to Michiko sweet? Steampunk's pretty kickass, isn't it? 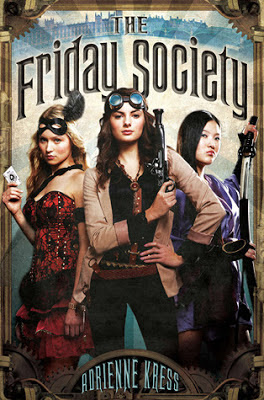