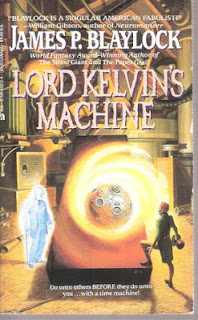 I'm reading my way through the seminal steampunk works of K.W. Jeter, Tim Powers, and James P. Blaylock for a chapter in a forthcoming academic anthology on steampunk. It's meant a re-read of some of the books, and in other cases, a first read. I'd read the short version of Blaylock's "Lord Kelvin's Machine" as it appears in Tachyon's Steampunk anthology, edited by Ann and Jeff Vandermeer, but I'd never read the entire novel before.

In their anthology, the Vandermeers speculate that "Lord Kelvin's Machine" may be the "quintessential steampunk story, with its combination of darkness and diabolical invention and cosmic scope" (17). I'm not sure why darkness needs to be present in the quintessential steampunk story, since so much of Blaylock, Jeter, and Powers' seminal steampunk works are whimsical and light-hearted. Cynthia J. Miller and Julie Anne Taddeo make a similar minor error concerning how "dark" these early steampunk works are in their introduction to Steaming into a Victorian Future, calling these early steampunk books "darkly atmospheric novels" in a "London darker and wilder than anything imagined by Dickens" (xv). There's a good deal of night-time dealings in these books, but while Blaylock's Homunculus is filled with animated corpses, it retains Blaylock's signature whimsy. Lord Kelvin's Machine (LKM), however, has far less whimsy than Blaylock's other early steampunk, and so is arguably as dark at points as the Vandermeers indicate, quintessential steampunk notwithstanding. Nevertheless, I agree that the cosmic scope of the novel especially make it a strong candidate for the best of the seminal steampunk offerings, including the works of Moorcock and Priest.

The book is divided into three acts: The first part, "In the Days of the Comet," contains an expanded version of the text from the short story, "Lord Kelvin's Machine" ("LKM"), which originally appeared in Asimov's SF in December of 1985. The expanded first part begins with a new prologue and shifts the original prologue into the body of the first act. (Minor Spoiler Alert!) The new prologue, "Murder in the Seven Dials," tells of the death of Alice St. Ives at the hands of Ignacio Narbondo, Langdon St. Ives' nemesis. The rest of "In the Days of the Comet" reads very much like the original "LKM," concerning St. Ives and Co. racing to stop Narbondo from driving the earth into the path of an oncoming comet using volcanic eruptions while trying to thwart the Royal Society's plan to shift the Earth's poles using Lord Kelvin's machine, save that St. Ives is far more brooding, driven by his wife's death. The original "LKM" reads like most other St. Ives' stories, with Blaylock jumping back and forth from adventure to absurdity. The absurdity of sabotaging Lord Kelvin's device with famished snakes and mice seeking grain stuffed into the machine remains in LKM, but has become muted in the shadow of Alice's death. The first act ends much the same way as it did in "LKM," with Narbondo seemingly drowned in a mountain lake, and Lord Kelvin's machine ruined by the offending snakes and mice: we learn that the unfortunate animals "had rained on Leeds like a Biblical plague" when the Machine exploded (323). 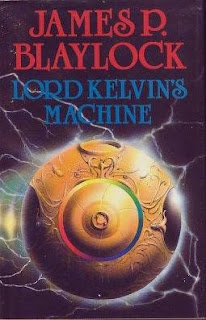 The second part "The Downed Ships: Jack Owlesby's account" is weaker than the other two, mainly because Blaylock shifts to the first-person perspective of Jack Owlesby. Like "LKM," "The Downed Ships" could nearly stand alone as another short work. (Medium Spoiler Alert!) The reader learns of Narbondo's remarkable survival from the mountain lake, witnesses the return of Willis Pule from Homunculus, and is treated to a number of Owlesby's bumbling misadventures; while these are funny enough, Owlesby lacks the same wit and concision that Blaylock's third-person omniscient narrator possesses in Blaylock's other steampunk writing. In short, he's just not as funny. This is a credit to Blaylock, who can clearly write in another voice, not simply transferring all of this narrators' traits to Owlesby.  Nevertheless, the shift weakens the overall product somewhat, and is ultimately unnecessary.

The third part, "The Time Traveler" is really the tour de force of LKM. In it, St. Ives uses the reconstituted core of the Machine to travel through time. (MAJOR SPOILER ALERT!) The journeys share a kinship with the time-hopping in Powers' Anubis Gates, with Ives changing himself as he changes the past. I don't know Time Travel in SF well enough to know if this is a first, but the way Ives' memories keep shifting as he changes the past might necessitate giving Blaylock creative credit on the concept for Looper. St. Ives seeks to change the past to save his wife, but in the process ends up saving the young Ignacio Narbondo from Menangitis. This act of compassion changes St. Ives as well, healing the bitter wound Alice's death left festering inside him. partly blaming the tragedy on his own indecision. When he finally succeeds in changing the moment of the past when Alice was murdered, he has changed enough to realize that he cannot remain in that past:


He looked out into the street, where his past-time self lay invisible in the water and muck of the road. You fool, he said in his mind, I earned this, but I've got to give it to you,when all you would have done is botch it utterly. But even as he thought this, he knew the truth--that he wasn't the man now that he had been then. The ghost in the road was in many ways the better of the two of them. Alice didn't deserve the declined copy; what she wanted was the genuine article.
And maybe he could become that article--but not by staying here. He had to go home again, to the future, in order to catch up with himself once more. (458)

This is a beautiful speculative reflection on the nature of identity and potential: St. Ives is no longer the man whose hesitation cost him his wife. He is no longer the man who stood and watched her die. He is another man, a man no longer driven by revenge upon his nemesis, but tempered by compassion, knowing the origins that may have driven Narbondo to the life he lead. The passages where St. Ives visits the fitfully sleeping child Narbondo are beautifully heartbreaking, given what a bastard Blaylock makes Narbondo out to be in Homunculus and more recently, The Aylesford Skull. St. Ives cannot conflate that villain with this child. The moment when he traces the spine for a hump is particularly touching, since it echoes the sort of touch a parent visits upon their own child, checking for injuries. St. Ives changes the past by curing the child's ailment, but more importantly, he changes himself. We often consider ourselves fixed entities, old dogs with an inability for new tricks, but plasticity has revealed that our selves are not nearly so fixed as we once thought. Blaylock's St. Ives, through the fictional novum of time travel, undoes even the fixed nature of the character in a play or novel, as Pierandello's Six Characters in Search of an Author once argued was set, always cursed to play out the same actions. While this is arguably still true of St. Ives in LKM and "LKM," even the existence of two versions of this story undermines the idea of a fixed self, a fixed path, a fixed destiny: as St Ives realizes in-between one of his time traveling jaunts, "he had come back to a different world than he had left" (448). Changing the past through time-travel is not only St. Ives' game, it is Blaylock; he is rewriting St. Ives' past in this novel by giving him a wife. And while we, in the real world, are unable to make such massive changes arbitrarily, we can, like St. Ives, change the world around us through the sort of compassion visited upon Narbondo as a sickly child. It is an act that doesn't change him so much as it changes St. Ives. 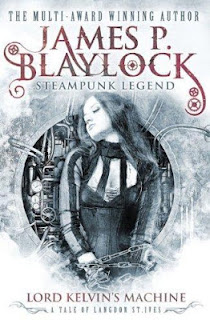 I find this particularly compelling because of how it synthesizes with a challenge I issued to steampunk writers in my Verniana article on Captain Nemo: to take the Captain's example in Mysterious Island of committing anonymous acts of charity as template for a possible steampunk ethos. Rather than railing against Empire or thwarting enemies of the Crown, if steampunk really sees Verne as a narratological guru, than shouldn't steampunk characters and personas seek to do likewise? Nemo welcomes the strangers to his Island and cares for them, a radical act of hospitality. Blaylock makes St. Ives go the extra mile of Christ's beatitudes, loving his enemy, blessing the villain who has persecuted him. This is a far cry from the sort of politicized "punk" ethos that continues to be thrown at the doorstep of the seminal steampunk writers. But before anyone assume I'm endorsing it as some sort of essentialist core to steampunk, think again. Like the time traveling adventurer of Lord Kelvin's Machine, steampunk has changed its own future. That said, while I cannot claim Blaylock as part of a Holy Trinity creating the scriptures of steampunk, I can at least say that I far prefer the path he takes his hero upon to the one writers like Mieville and Moore lead theirs upon. 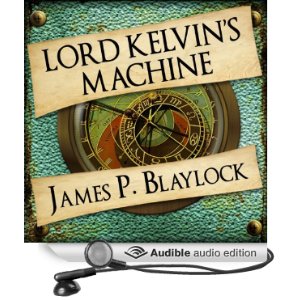 My references to Lord Kelvin's Machine (novel) are taken from Subterranean Press's The Adventures of Langdon St. Ives. My "read" of the book was via the excellent audiobook. Readers hoping to find the novel in print will be glad to know that Titan Books has released a new edition, with a lovely, albeit narratively incongruous cover.
Email Post
Labels: James Blaylock Novels Seminal Steampunk