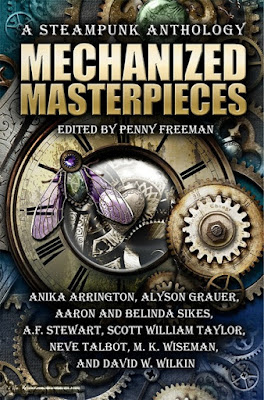 The anthology features eight short stories which apply the steampunk aesthetic to Jane Eyre in "Tropic of Cancer" by Neve Talbot, Sense and Sensibility in "Sense and Cyborgs" by Anika Arrington,
Dickinson's David Copperfield in "Micawber and Copperfield and the Great Diamond Heist of 1879" by David W. Wilkin, Andersen's "Little Match Girl" in "Little Boiler Girl" by Scott William Taylor, The Phantom of the Opera in "A Clockwork Ballet" by M. K. Wiseman,  Dickens' A Christmas Carol in "His Frozen Heart" by Aaron and Belinda Sikes and "Our Man Fred" by A. F. Stewart, and Frankenstein in "Lavenza, or the Modern Galatea" by Alyson Grauer. In all cases, the writers are engaging in pastiche or recursive fantasy, not mash-up mimicry. In addition to appropriating Victorian historical elements for its collage, steampunk appropriates Victorian literary elements, sometimes synthesizing both in a counterfictional, not counterfactual way. This appropriation and synthesis most often manifests in steampunk as recursive fantasy, rendering steampunk a highly intertextual aesthetic. In the EF, recursive fantasy is described as “exploit[ing] existing fantasy settings or characters as its subject matter.” Recursive fantasy can be parody, pastiche, or revisionist re-examinations of earlier works such as fairy tales, pulp adventures, or extraordinary voyages. These texts also play with what the EF calls “the flavor of true [recursive fantasy],” whereby “‘real’ protagonists [encounter intersecting] worlds and characters which are as ‘fictional’ to them as to us” (805). These approaches have been part of steampunk since its inception, from the use of Wells' Time Machine in Christopher Priest's Space Machine and K.W. Jeter's Morlock Night to the love affair of Walt Whitman and Emily Dickinson in Paul Di Filippo's Steampunk Trilogy. Mechanized Masterpieces is as broad in its sources - arguably, steampunking Frankenstein seems an obvious move, whereas steampunking Jane Eyre is an odder, perhaps more innovative one. While it might be counted as a strength to be using works less traveled by in steampunk circles (no Verne, and only the barest mention of Wells), in some cases, this is to the anthology's detriment.

The counterfictional explorations of Mechanized Masterpieces are not only diverse in their sources, but to my eye, the success of applying the steampunk aesthetic to their respective literary worlds. Much as I will readily admit that just about anything can have the steampunk aesthetic applied to it, this is not always done well, and the choice of object to steampunk plays a strong role in this. I found the anthology's lead tale, "Tropic of Cancer," a weak execution of the application of the steampunk aesthetic to Jane Eyre. Neve Talbot gets full marks for her conceit, which is a short, steampunk approach to the same ideas Jean Rhys explored in Wide Sargasso Sea: how did Bertha Antoinetta Mason go mad? It's a perfect space for steampunk looking to investigate the marginalization of both women and persons of colour, but the image of Bertha in BDSM leather at one point seemed not only anachronistic, but tasteless. The inclusion of airships and steampunk prosthetic limbs was ultimately unnecessary, adding little to the tale. It is the fictional equivalent of those superfluous but stylish gears on top hats. Worse yet, it's a somewhat incoherent, poorly-wrought story, with some very clunky use of regional dialect, and as the first work out the gates, neither invited this reader to keep reading the short story, nor the anthology as a whole.

Consequently, I took the approach I do when selecting samples to use in a lecture on strong beginnings in fiction. I've told my students that good short fiction writers tell us everything we need to know about their work in the first 50 words. I would test these steampunked versions first by whether I was invited to read on, since that is arguably what all my readers are wanting to know as well.


Anika Arrington's "Sense and Cyborgs" fared much better, not only for inviting me to keep reading in its first 50 words, but also in the use of dialect as persona voice. Her story is an engaging, but I couldn't ascertain what it referenced in Sense and Sensibility, other than the use of Margaret Dashwood as heroine, a steampunked-cyborg-first-mate on a sailing vessel. I'm sure someone will take umbrage with me on this statement, but I think the lack of trying to fit steampunk elements into an already-established story is one of the reasons "Sense and Cyborgs" works, while "Tropic of Cancer" doesn't. While it's not impossible to steampunk Jane Eyre, I think it's safe to say it would be more difficult; Arrington doesn't so much steampunk Sense and Sensibility as she does write a steampunk story and then stick Margaret Dashwood into it. Again, it's a bit like putting a feather on that hat with the cogs, but at least it looks fantastic.

I gave up on "Micawber and Copperfield and the Great Diamond Heist of 1879" by David W. Wilkin, but for pretentious academic reasons. As I've said already, I want short fiction to tell me where we're going in the first fifty words. It doesn't have to give everything away, but it should drop hints about where we're headed. If "Micawber and Copperfield" was well-crafted, it was about to become David Copperfield meets Master and Commander, and while I like Patrick O'Brian's work a great deal, it doesn't have a damn thing to do with David Copperfield. Granted, the hero of  "Micawber and Copperfield" is Daniel Copperfield, not David, who meets up with a descendent of Wilkins Macawber (whose part ownership in an airship company is the reason his grandson is serving as Captain on board the airship), but both felt as disconnected as the inclusion of Margaret Dashwood in the previous story, without the advantage of a great introduction. It could also be that I think pastiches and recursive fantasy should either match the tone or theme, or of the original source, as is the case when steampunk appropriates Verne, Wells, Poe, or Shelley - there is already a sense of adventure, speculation, fantasy, or horror in these works. To take the ancestors of characters from a Dickens novel and have them playing out a steampunk heist is admittedly "gonzo" writing, but I keep asking the question, "Why bother?" Compare Wilkin's use of Dickens with Cory Doctorow's "Clockwork Fagin," which is still about orphans and oppressors.

This is precisely why Scott William Taylor's "Little Boiler Girl" really worked for me. Taylor takes the brevity of Andersen's short, tragic tale, and turns it into a steampunk story of resistance and rebellion without abandoning the ties to the source fiction entire. It shares a strong kinship with Doctorow's "Clockwork Fagin," and was a real pleasure to read. For steampunk scholars looking at comparing original works with steampunk versions, this one is worth taking a look at.

M.K. Wiseman's "A Clockwork Ballet" is an interesting pastiche sequel to Phantom of the Opera, exploring the counterfictional "what-if?" of Erik surviving, with attentions turned to Meg Giry instead of Christine Daaé.Like "Little Boiler Girl," it does a fine job of applying steampunk elements to the characters and setting of Phantom without resorting to the far-flung distance of Wilkin and Arriington's stories.

Aaron and Belinda Sikes' "His Frozen Heart" is dark pastiche-prequel to A Christmas Carol, providing the first meeting of Jacob Marley and Ebenezer Scrooge in a steampunk quest for the key to bringing the dead back to life. It's a clever story that does a fine job of referencing its source material without being slavishly tied to it. The Sikes are able to combine fidelity to Dickens with the gonzo-steampunk distancing in a way that renders Scrooge and Marley's presences part of the narrative, rather than throwaway name-plates. This is less the case with "Our Man Fred," which, while being a fun steampunk spy-story, is tenuously connected to A Christmas Carol only through the use of the names of Scrooge's nephew Fred.

And finally, "Lavenza, or the Modern Galatea" by Alyson Grauer, which does a lovely job imagining an alternate origin and conclusion for Elizabeth Lavenza in Frankenstein. Along with "Little Boiler Girl," this one hews closest to its source material while forging out in new, counterfictional directions. If I'd been editing this book, it's the one I would have started with.

So, the question likely lingers: "Should I read Mechanized Masterpieces?" The e-Book is only $4.00, and I've given you an assessment of these eight stories that sheds a positive light on all but two. Only "Tropic of Cancer" and "Micawber and Copperfield" were unreadable for me, while the rest, despite varying in fidelity their original texts and artistry as written work, are all entertaining diversions of one stripe or another. It's not as good as my favorite steampunk anthology, Steampunk! from Candlewick Press or Tachyon's first Steampunk anthology, but it's as good as many of the stories in the subsequent Vandermeer anthologies, and at very least, would make for an interesting intertext for people teaching the original texts, or those doing research on steampunk as pastiche.