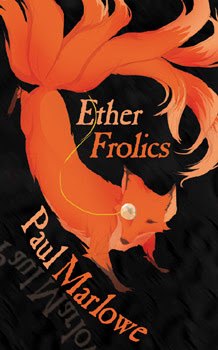 This is the first year since 2010 that I didn't do a dedicated feature on Canuck Steampunk. As I said earlier in 2013, I'm no longer looking to produce vast reams of content, both because I'm done writing my dissertation, and also because I'm a bit sick of all the content out there on the 'Net. I'm tired of lists telling you what sucks, instead of encouraging you to read something you'll genuinely enjoy.

Which is why I'm glad to tell you about Paul Marlowe's Ether Frolics. Marlowe's a Canadian writer of speculative fiction whose steampunk short stories in Ether Frolics veer decidely to the fantasy side of neo-Victorian technofantasies. Marlowe is a smart writer who is clearly well read, who knows that the late nineteenth and early twentieth centuries were obsessed with spiritualism. He's also a very good writer, at his best when writing in first person, which the majority of Ether Frolics' tales are. That isn't to say he's a brilliant writer - that will come at some point, I'm sure, once Marlowe is more adept at creating distinct character voices. But this is a minor quibble, since short story collections are best when read one story at a time, digested in the pieces they originally represented. I kept considering the stories as individual entities as well as part of a larger collection, and can imagine I would have been very impressed if I'd read "Cotton Avicenna B. iv" in Issue 13 of South Africa's Something Wicked.

The collection is divided into three groups, which are each linked together by time or concept, but are all connected by being part of a larger story cycle concerning the Etheric Explorers Club, a group dedicated to paranormal investigation. Readers meet a handful of the group's members, with many of the stories centering on Rafe Maddox, a gentleman scholar and erstwhile scientist and his companions. I thought it admirable that Marlowe's publisher chose to have as muted a cover as he did, given that this book could easily have been called Ether Explorations: A Rafe Maddox adventure, as many titles are boilerplated as these days. Steampunk series abound with the formula: Intriguing Title: A So & So and Sidekick Adventure/Tale/Chronicle/Anecdote. Perhaps Marlowe's publisher knew what I do: smart readers aren't attracted to Photoshopped covers and pulpy titles.

That isn't to say that Marlowe isn't entertaining: he is, but in an unconventional way for a modern writer, even a steampunk one. His writing successfully emulates Victorian and Edwardian conventions without aping them. When steampunk writers emulate nineteenth century styles, they either fail or overdo those styles, which fails to appeal to modern audiences. With Marlowe, I often felt I was reading a book that had been left in a time capsule, which is exactly what the framing narratives of Ether Frolics indicate the collection is supposed to be. The only crack in this illusion is the similarity of narrative voices, but I was able to pretend editorial redaction had created that effect, and pretend that once upon a time, there was a group of paranormal investigators called the Etheric Explorers Club, whose adventures took them to the trenches of the Great War, the underground of Victorian London, the far reaches of Antarctica, and deserted islands, whose tales evoked literary resonances with Dante, Shakespeare, Lovecraft, Poe, and Blackwood.

While not all of the stories may leave you astounded, my bet is that at least a few will leave you wanting to return. For me, those tales will be "The Last Post," a tale of the Great War whose literary antecedent includes The Song of Roland and Terminator, "The Grinsfield Penitent," which contains one hell of a moment in a confessional, "The Mud Men of Tower Tunnel," which is like a steampunk X-File, and "Cotton Avicenna B. iv," which is the sequel to "Grinsfield" and "Mud Men," in spirit and in darkness.

If you're looking for excellent short steampunk fiction from one author, I would place Marlowe's Ether Frolics on a par with some of Blaylock's short work. Definitely recommended.
Email Post
Labels: Canadian Steampunk Short Stories