The Aylesford Skull by James Blaylock 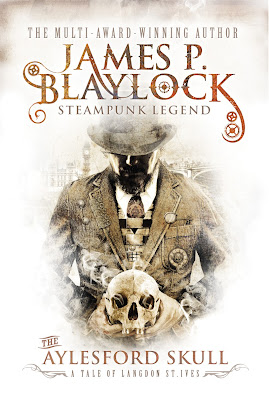 I've been studying Blaylock's work for four years now, since I first read portions of the omnibus collection of his early steampunk works, "The Adventures of Langdon St. Ives." When I was asked to interview Blaylock at a convention, I thought it best to acquaint myself with his non-steampunk writing as well, and read a few of his urban fantasies, such as "Last Coin" and "All the Bells on Earth." I found that I preferred Blaylock's later writing style to that of his steampunk work. This is not to say I find his early steampunk onerous to read. Blaylock has become one of my favourite writers, but if I were to recommend a Blaylock read, it would be one his modern theodicies. Modern readers generally lack the patience required for Homunculus or Lord Kelvin's Machine. Even The Aylesford Skull, a book that is easily one of his best, which combines the best of Blaylock's urban fantasies' villainous horror with the whimsy and romance of his steampunk world, gets reviews which complain about the blandness of Langdon St. Ives as a protagonist.

I suppose this is due to how steampunk is perceived by neophytes to steampunk literature. It was part of my own learning curve, to discover that the bombast of modern steampunk was not part of its genesis. I was pleasantly surprised by the quaint whimsy of Blaylock's early St. Ives' stories. It was a welcome change of pace from the steampunk-as-summer-blockbuster approach of many lesser writers I've had the misfortune to read. But Blaylock is being marketed by Titan Books as a "steampunk legend," matched with covers that don't necessarily pair well with the content behind them. Consider the cover for Lord Kelvin's Machine, which features an attractive young woman chained to an infernal device: while this can loosely be understood as St. Ives' wife, it's hardly indicative of the tone or events of the narrative. 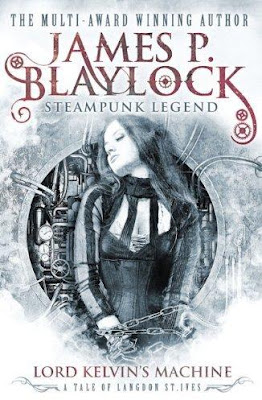 This isn't a bad thing, per se: I support the repackaging and reprinting of Blaylock's steampunk for this new generation of fans, but one can see how expectation might not match delivery. In truth, I consider this the failing of the reader, not the writer. If a steampunk fan reads Westerfeld or Hodder and then turn to Blaylock, they're likely to be disappointed. By comparison to Hoddder's Burton, Langdon St. Ives is bland. But that's part of his appeal, and it's a consistent feature of Blaylock's writing, steampunk and otherwise.

You see, Blaylock writes hobbits as heroes, all the time. Only his hobbits are humans. They enjoy food and drink and the quiet life, and would love to be left alone. Even in Homunculus, St. Ives is a hesitant hero. He wants to attend to his research, but finds himself caught up in greater events due to loyalty to friends.The heroes of Blaylock's books are average, sometimes even bumblers, prone to errors of timing and limited knowledge. They are like an Everyman version of Doc Savage and his Fabulous Five. And the St. Ives of The Aylesford Skull is no different. If anything, he's even more prepared to stop gallivanting about on wild adventures. He is ready to settle down and become a family man, but cannot, since his nemesis, the nefarious Narbondo, kidnaps St. Ives' four-year-old son as part of a much larger scheme.

This is where Blaylock departs from his earlier steampunk: while the heroes remain hobbit-like, a typical Blaylock-crew of regular joes stuck in the middle of bigger events, the villains have taken on the darker shadows of Blaylock's urban fantasies/horror. Narbondo and his cronies retained an element of the comic in Homunculus, while the villain was viewed through the lens of sympathy and compassion in Lord Kelvin's Machine. In The Aylesford Skull, the villains are monstrous, fully capable of murdering a child. They bear greater resemblance to the real-world style of villainy seen in Winter Tides; Blaylock confessed to disliking that villain more than any other. The consequence of a far more violent Narbondo is a decided loss in Blaylock's trademark whimsy, which runs across the board of his seminal steampunk works.

There is still levity, through the brash character of Tubby Frobisher, one of St. Ives' companions, but it is tempered by the darkness of the opponent they stand against, and the desperation they often feel. Time and again, Blaylock brings the reader to the point of hope, only to dash it on the rocks. Again, the average reader will be frustrated by this, used to formulaic plots that demand that the rescue happen at this point, followed by falling action, etc. Blaylock has never been a formulaic writer, and his steampunk is no exception. I will readily admit that Blaylock may not be to the taste of modern readers used to brainless page turners. If you're looking for thoughtful, whimsical, and sometimes dark prose, Blaylock is your man. And while The Aylesford Skull is easily the most accessible of his steampunk writing, I wouldn't recommend starting here. Get the reprints of Homunculus and Lord Kelvin's Machine from Titan. It would be a shame to meet the jack-of-all-trades Bill Kraken in these pages without knowing who he was before, or experience St. Ives' trusty sidekick Hasbro without appreciating his many abilities (especially in the final act of Lord Kelvin's Machine), or realize how much Blaylock has grown as a writer, including women in the previously all-boy's club of his steampunk adventures. That said, with all the lesser steampunk I'm seeing on the shelves, if it's a choice between nearly anything else and The Aylesford Skull, I'd throw my lot in with St. Ives and his less-than-fabulous-fellows.

NOTE: I read the novel while on summer vacation, so took the opportunity to listen to the audiobook while driving the long Canadian distances between destinations, when I could return to the print copy. William Gaminara's narration is superb, and his delineation of voices by accent, pitch, and mannerisms is among the best I've heard.
Email Post
Labels: James Blaylock Novels